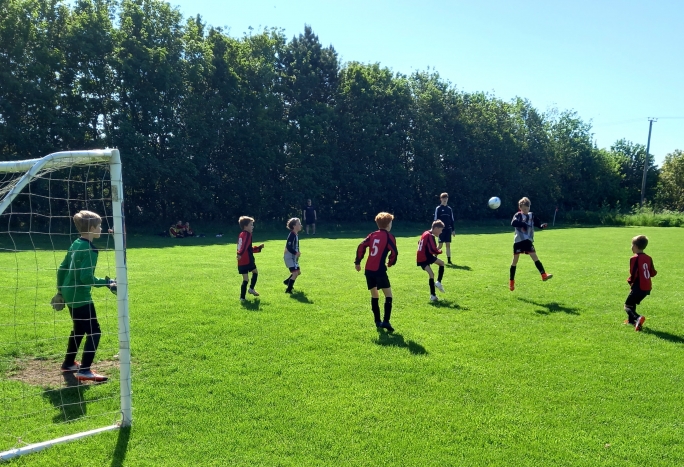 A warm, sunny morning was the backdrop for the AFC Henley Hurricanes U10s final league match of the season. Regular spectators were unaccustomed to the warmth, being more used to thermals and flasks of coffee. The game was a return fixture against the Finchampstead Tornadoes following the Hurricanes’ visit to South Berkshire a few weeks previously.

The Hurricanes had the better of the early exchanges. Will Lindsay was winning the ball on the left wing, and combined well with Luca Currie and Oscar Robinson. Having started slowly for the last few games, it was great to see the Hurricanes in their stride early on. Tornadoes, however, can strike when least expected, and this was a case in point. A clean pass down the pitch and their striker’s shot bypassed the Hurricanes’ defence leaving the keeper with no chance.

Despite this setback, the Hurricanes continued to work hard and create chances. Captain Jake Thatcher was tackling well in midfield, and Shiva Vadhoolan won the ball, found a pass despite being on the floor, and was able to get up and into a good position to slot the ball past the keeper.

The Hurricanes didn’t have it all their own way, as the Tornadoes were applying pressure too. A well-taken corner found its way into the Hurricanes’ goal via several deflections. However, the Hurricanes found an unusual response: a long kick from goalkeeper Harrison Carpenter Buckett into the Tornadoes’ box bounced over their helpless keeper and looped into their goal.

The Hurricanes looked to build on this good fortune, but gradually the Tornadoes were turning up the pressure. One shot brought an instinctive save from Harrison Carpenter Buckett in goal, whilst Dominic Ellis and Nicolas Hernandez St Clair were also defending hard. The Tornadoes generated several chances, including two free kicks, one of which sailed just over the bar.

The Hurricanes, however, kept working hard. Will Lindsay had a shot on target following a good exchange with Oscar Robinson and Shiva Vadhoolan. Nicolas Hernandez St Clair had a shot saved and Jack Callaway headed over. Finally, the perseverance paid off, after goalmouth moves from several players Nicolas Hernandez St Clair managed to persuade the ball over the line.

The Hurricanes looked to raise the tempo as the game drew to a close. A fast ball from Harrison Carpenter Buckett to Oscar Robinson was passed to Jack Callaway, whose shot was just over the bar, as was a long range attempt from man-of-the-match Shiva Vadhoolan. It was the Tornadoes, though, who had the last laugh. In the dying moments of the game their striker won the ball on the edge of the box and struck it cleanly into the back of the net.

The next step for the Hurricanes is to begin the transition to nine-a-side games with a programme of friendlies and tournaments ahead.