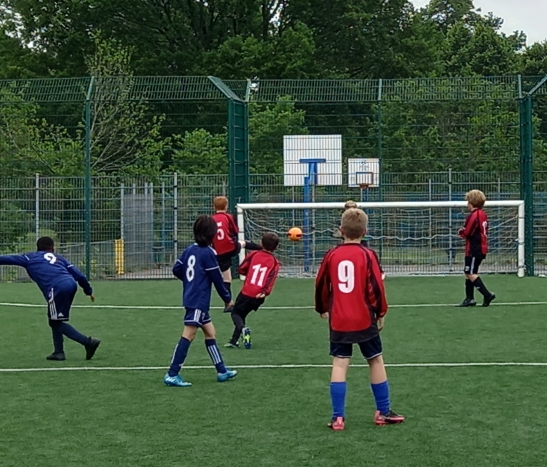 AFC Henley Hurricanes U10s played their first tournament in two years last weekend. The hosts were Berkshire Elite, a familiar opposition from league encounters. The tournament was well attended across ten age groups from U7 to U16, and used the five-a-side pitches at Prospect Park in Reading in a fast moving format of ten-minute games. The enclosed pitches brought new challenges with the ball bouncing at unusual angles including from behind the goal over the keeper’s head, and using the wall to their advantage.

The first game in the group stages was against CSA07 Dragons who are based in Newbury. This was a first taste of how fast and end-to-end the football was going to be. The Hurricanes had much of the possession during the game, but the Dragons defended their Den and proved hard to break down. In the end, the Hurricanes made their possession count, Will Lindsay, Oscar Robinson and new signing Kyuss Green all finding the net.

The second game was against the Berkshire Elite Gold, representing the hosts and one of five Berkshire Elite teams in the competition. Again the game was played at a frenetic pace with shots at both end. For the Hurricanes, Oscar Robinson, Will Goulden and Nicolas Hernandez St Clair were on target, whilst at the other end Harrison Carpenter Buckett needed to be on his toes to cut out looping long balls and their rebounds.

A quick turnaround was needed for the third game, which was against the Berkshire Elite Black team. They were rumoured to be the strongest of the home teams, and this was confirmed in the game. The opening part of the game was well matched, with both teams having shots on goal and both keepers being in the action. However, following a spell of sustained pressure the hosts broke through and never looked back.

A slightly longer interval before the next game meant a chance to visit the BBQ stall, or for the fearless to join the long queue for coffee. The fourth game was against Slough-based 4Future Pro FC. The Hurricanes used the long ball to good effect, Dominic Ellis finding Will Lindsay with one early in the game and scoring from the halfway line with another. 4Future Pro had the Hurricanes under some pressure later in the match, but a brace for Will Goulden made sure there was no mistake.

The final game in the group stages was against the Berkshire Elite Diamonds, familiar opposition from the league competition. The game was unsurprisingly competitive. The Hurricanes took the lead through another Dominic Ellis long ball from a free kick, and from a Will Goulden shot following good determined play from Will Lindsay and Oscar Robinson. However the Diamonds kept pushing hard and turned the tide with goals of their own.

The results were enough to confirm a place in the quarter finals as third placed team, earning a fixture against another familiar opponent in Eldon Celtic Lions. If anything, this game was played at a faster pace than the group matches and was a twelve goal thriller. Kyuss Green, Oscar Robinson and Nicolas Hernandez St Clair put the Hurricanes well ahead, only for the Lions to come roaring back into contention with a succession of savage shots. Goals from Will Lindsay and Kyuss Green were needed to book the Hurricanes a semi-final place.

The semi-final was the end of the road for the Hurricanes, losing to the eventual champions Bognor Regis Town Youth, who had travelled up from the south coast to take part. The Hurricanes worked hard, in particular Will Goulden and Will Lindsay catching the eye on the left. However, Town played a skilful and physical game and peppered the Hurricanes’ goal. Oscar Robinson put the Hurricanes back at parity with a persevering move of his own, but the onslaught from Town was too much and left the Hurricanes as runners up.

The tournament was well organised and enjoyable and the threatened rain stayed away. The Hurricanes move on to another tournament next weekend.