Henley Detachment’s very own Tallulah Scott and Jamie Forehand have both recently been promoted to the two most senior ranks achievable within the Army Cadet Force (ACF). This is a huge an achievement within the ACF and for their own personal development.

Tallulah Scott has recently promoted to the rank of Cadet Regimental Serjeant Major (RSM) after a series of interviews by the County Commandant. After 5 years in the ACF, RSM Scott is now the highest achieving cadet within the county and holds the Lord-Lieutenant’s Cadet Appointment.  She now has the added responsibilities leading regimental parades, developing senior cadets and having an input into the cadets training and development.

There is more success to follow at Henley; Jamie Forehand has been promoted to Cadet Company Serjeant Major (CSM), this is the highest rank within Nivelle Company (South Oxfordshire). CSM Forehand, who has been in the ACF for four and a half years, was interview by the Company Officer Commanding. Jamie has proven repeatedly that he is suitable for this role by leading parading, developing cadet’s leadership skills and taken on projects such as the research on the Battle of Cassel, which has close links to the Henley Detachment.

Finally, a huge thank you to newly promoted Serjeant Charlie James, has taken on the role of substitute Standard Bearer for the Henley & Peppard Branch for the Royal British Legion. 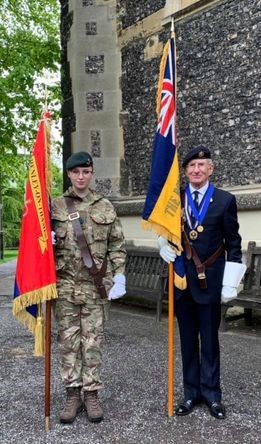 The Henley Herald website provides an up-to-date and unbiased digital news service for
Henley-on-Thames
River & Towpath Rubbish Gets The Boot!