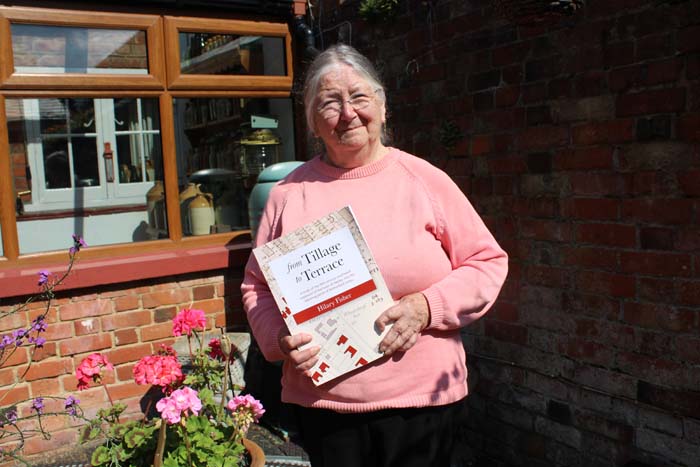 A new book from Tillage to Terrace has recently been published by Hilary Fisher which outlines the 19th century history of the expansion of the town into the adjoining parish of Rotherfield Greys (from Friday Street to Mill Lane and up to Green Lane and down Peppard Lane).
Hilary is a long time resident of Henley and member of the Henley Archaeological and Historical Group.  This is her second Henley history book she has worked on. The first book she was co-author of Henley-on-Thames, A Pictorial History which was published in 1990 with Ann Cottingham.
Hilary commented, “I’ve been collecting the information for decades and it is part of Henley that I live in and became interested in.  I started collecting things, making notes from things I read or saw, buying postcards etc.  I suppose for a while now people were saying you must put it altogether and write it down.  I had started it in 2019 and when Covid-19 broke and it was obvious it was going to go on for a long time I thought I should get on and do it. It gave me the impetus.”
Working in libraries throughout her career until she retired in 2006, Hilary was therefore adept at knowing where to find the information she was looking for but she also visited record offices and looked through HAHG archives.
The book is divided into four mapped areas and starts with tithe maps showing who the land owners were. It charts the history of the landowners, businesses, buildings, land sales and house builds along with brilliant commentary from council and society meetings on proposed developments.    The text is interspersed with a series of fascinating maps, illustrations, advertisements and photos too.
An example of the great commentary is “At a Council meeting the Mayor said that they had laid down a building line parallel with Caxton Terrace (Station Road) and had requested the owner to keep to the line, but he had not; however it also emerged that the Council had passed the plans.  It was decided to seek legal opinion as to how to enforce their desired building line.  Unfortunately for them legal opinion found against them and they let the matter drop.”
Describing herself as a bit of a “computer dinosaur” this has been Hilary’s biggest challenge with getting the book to print but her husband Kim has helped with the collation, layout and self publishing as he had done this before through his work.
Hilary has found many interesting things when she’s been researching.   She said, “One of things that personally fascinated me was who bought the St Mark’s estate land from landowner Robert Outhwaite.  He had and bought up a lot of land in Henley but actually made very little use of it.  He tried to sell a lot of it in 1872 but very little sold but shortly before his death it was sold to someone and in an extract I found said it was sold but didn’t actually name who it was.  I finally found the name of the owner, a Christopher Page Deane in some Council minutes who was a London solicitor but I haven’t found very much about him or any interest or his association with Henley in his life.  My favourite image in the book is the old Royal Hotel photo (now Royal Mansions) I found at a postcard fair 10 years ago.  The man who was selling it had no idea what it was.”
Looking to find out the history of the land your house was built on in Henley in this area, then this is the book for you.  The book costs £20 and is available from the Bell Book Shop on Bell Street and Ways Book Shop on Friday Street.