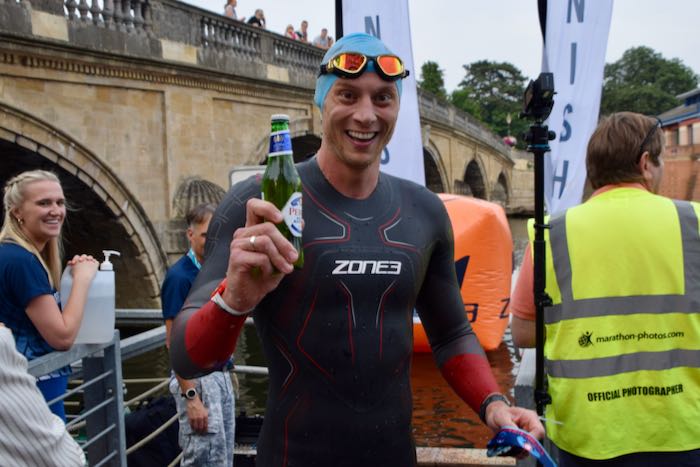 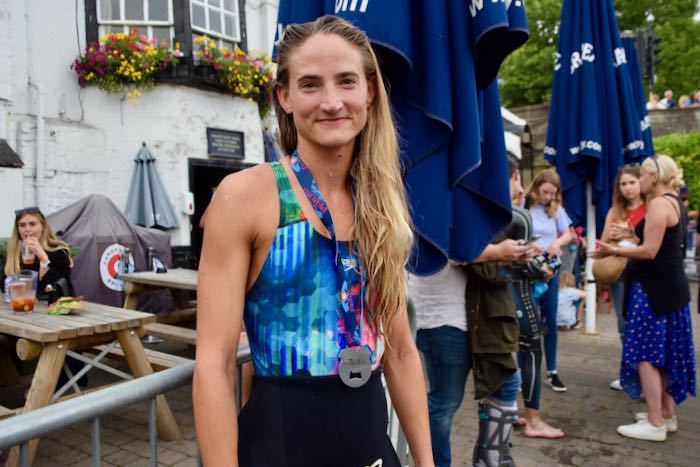 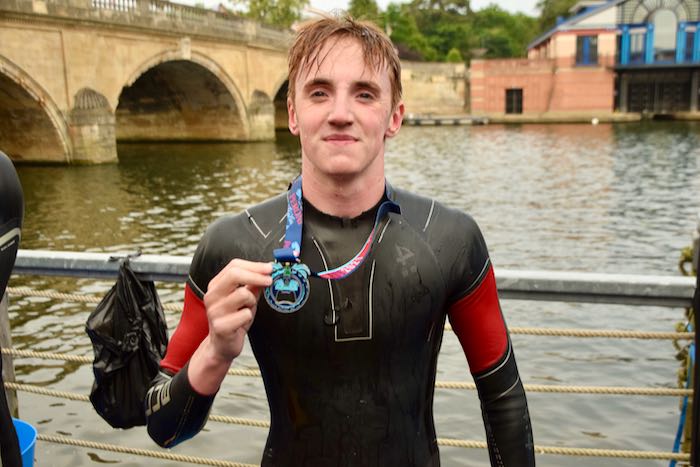 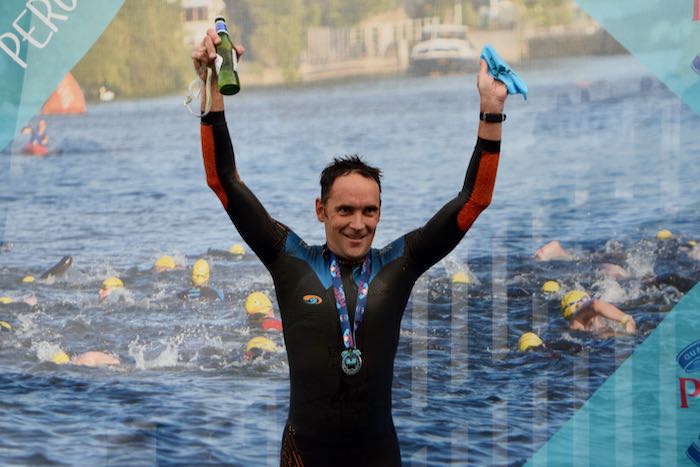 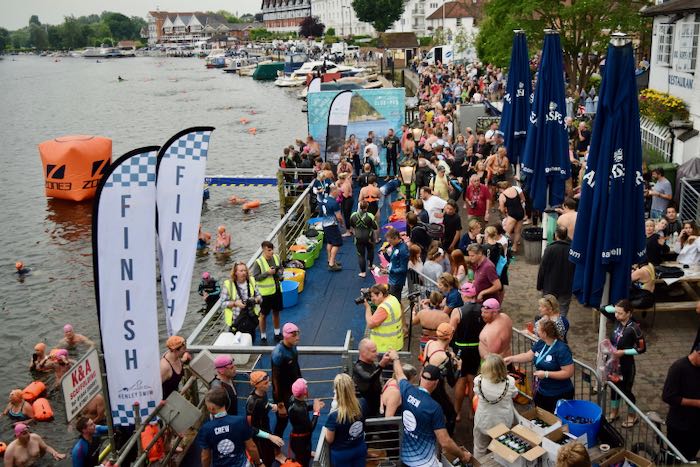 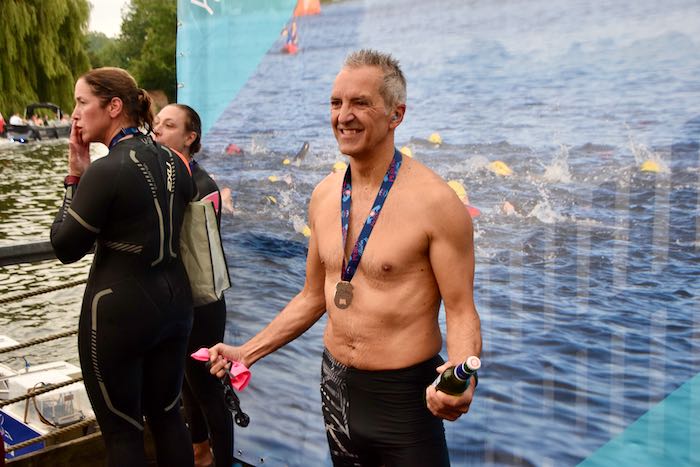 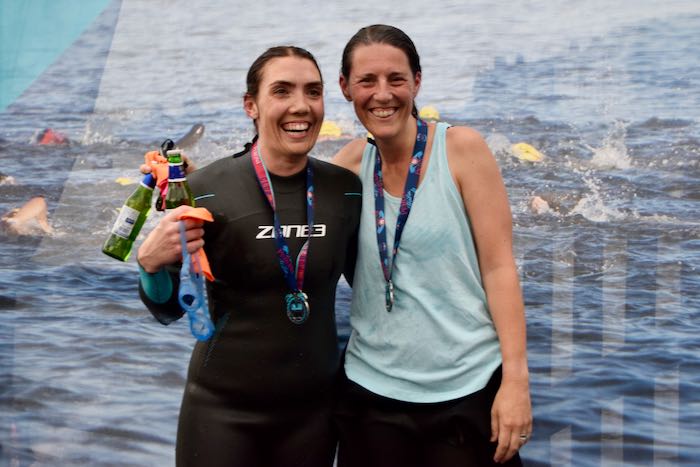 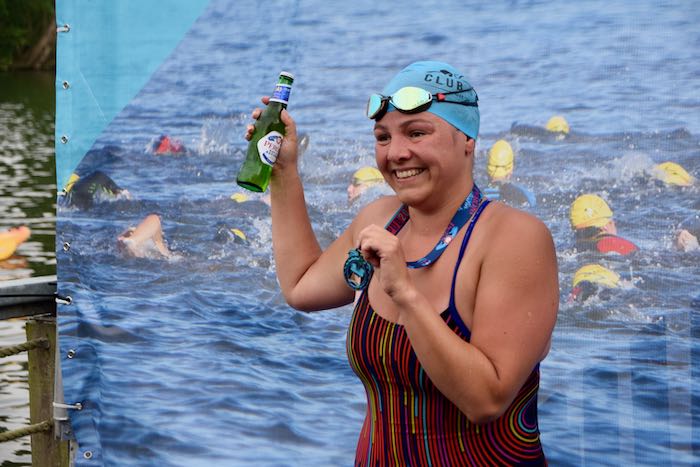 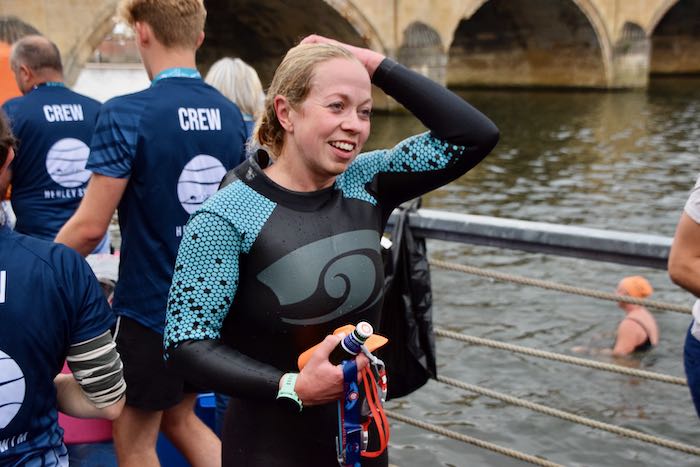 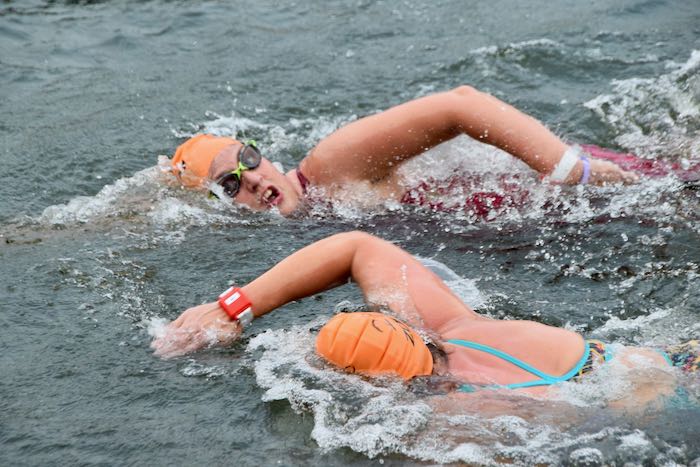 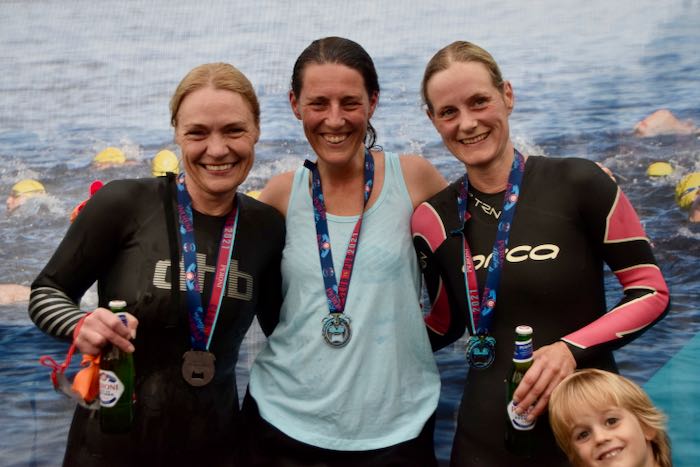 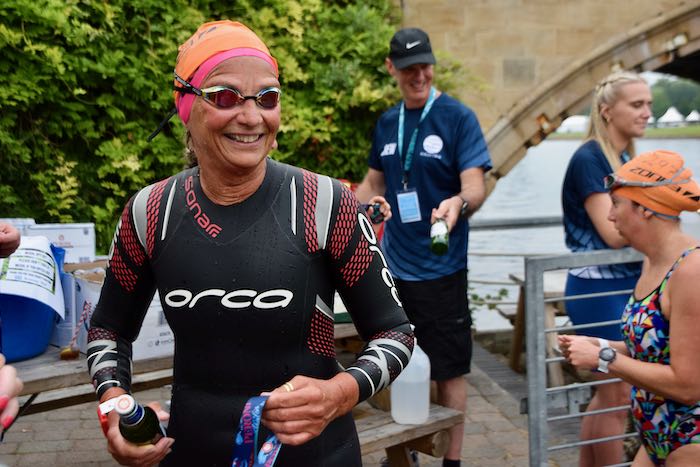 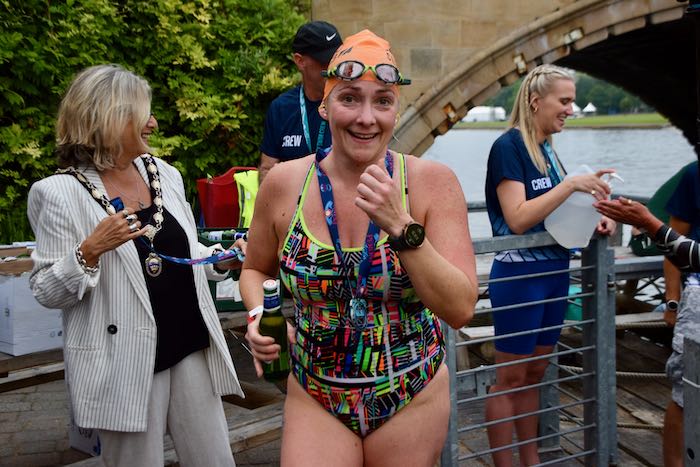 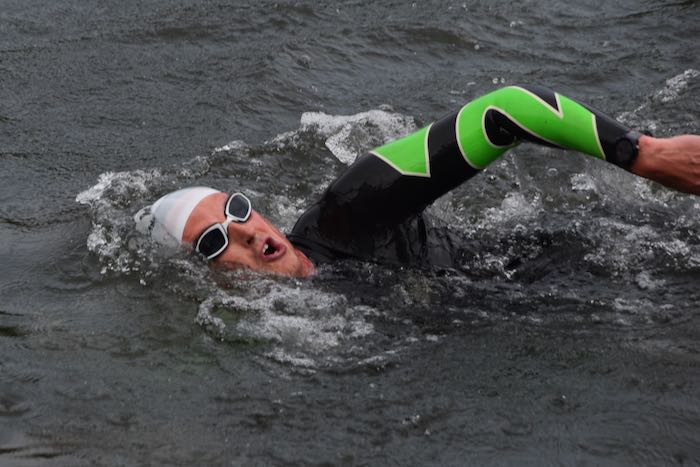 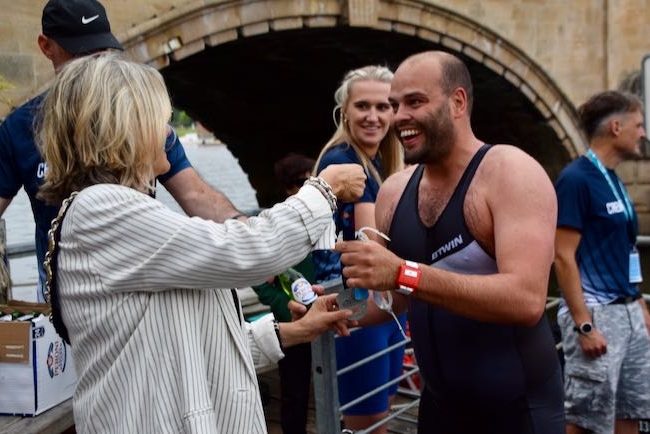 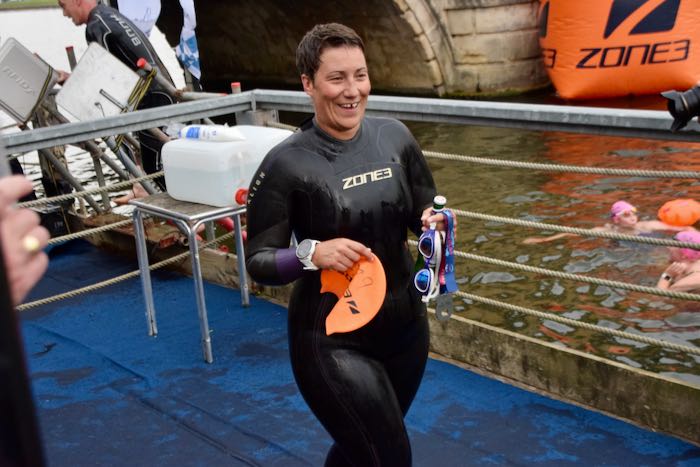 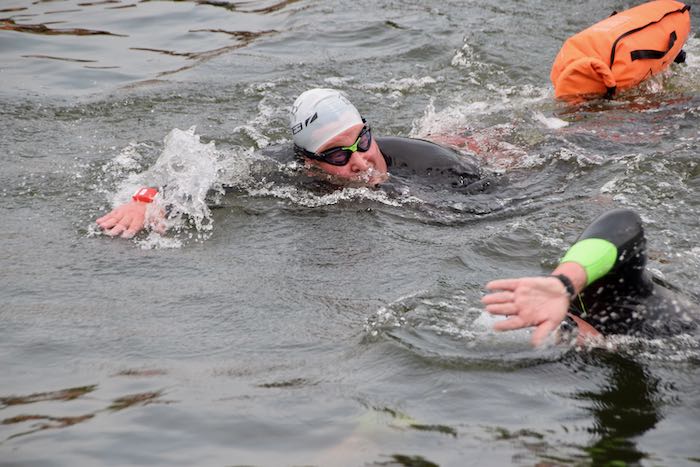 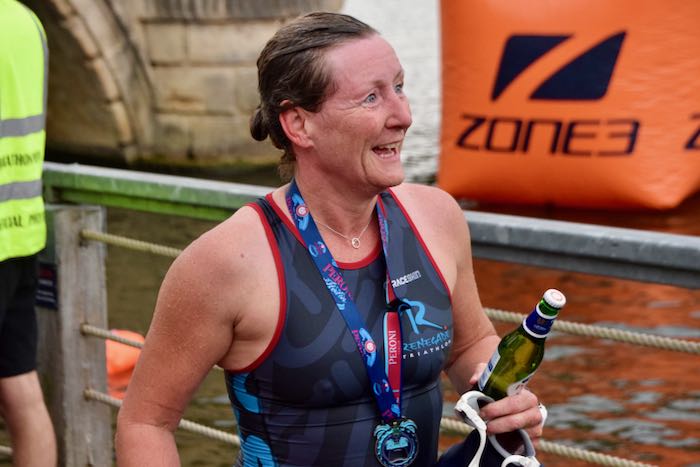 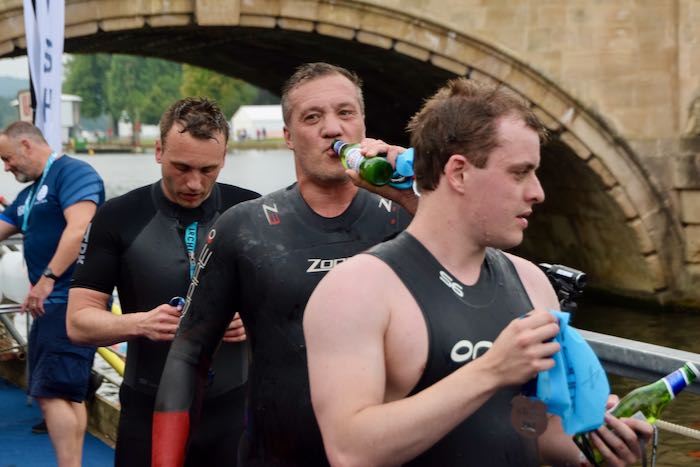 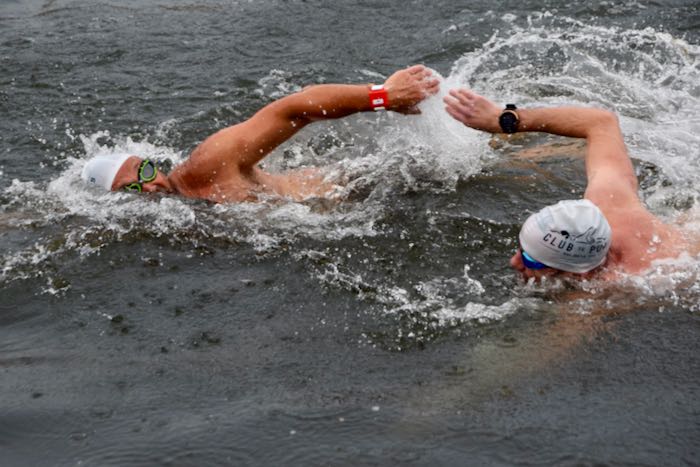 The ever popular Henley Club to Pub Swim saw hundreds of swimmers take to the Thames on Saturday evening, cheered on by crowds of supporters at the Angel on the Bridge.

Though the swim took place with limited capacity in 2020, it moved downstream towards Hambleden Lock and swimmers were set off individually. Many participants were delighted to see it return to the usual location this year. The 1.5km course begins at Henley Rowing Club, with swimmers first travelling upstream towards Marsh Lock before turning to finish at the Angel on the Bridge pub.

The open event welcomes swimmers of all abilities, and this year saw over 750 people take part. Every participant was given a bottle of Peroni at the finish, and presented with a medal that doubles as a bottle opener by Henley Mayor, Councillor Sarah Miller.

The first man to cross the finish line was Tom White, from Guildford, in a speedy time of 18:12. Tom was pleased to be back in the water for his first competitive swim this year, stating: “It’s a great start, and gives me loads of confidence. I’m a triathlete, so swimming this distance is my race distance for a triathlon. Coming out of the water first here sets me up with loads of confidence going into my next triathlon.”

Tom continued, “I’ve never done this event before, but I’ve got family in Henley so it made sense to come and swim, and get a beer at the end of it. It’s great to be back around people with the same mindset of getting in the water, swimming, competing, and getting fit and healthy.”

There was a blistering fight for second place with four swimmers crossing the line at once. Stephen Mott just edged the competition in a time of 19:43. Having finished in sixth place in the 2019 Club to Pub, Stephen was happy to have improved on his previous performance. “I’m really chuffed with that,” he said. “I’m used to doing long distance, and this is almost like a sprint, especially at the end. It’s nice to be back racing again with the crowds.”

Reading Swimming Club’s Masters men were the fastest team to finish, only one second behind Stephen in the rankings. Joel Winter (who finished first in 2019), Shawn Morgan, and Matt McQuillan all crossed the line together, with David Stannard following 40 seconds later.

Laura Coulier was the fastest woman, and seventh overall, taking 20:46 to complete the course. Laura, from London, said, “It’s the third time that I’ve done the Club to Pub, and I really like it. I like the idea that you get a beer at the end and your medal is also a bottle opener. I have a friend who is doing it as well, so it’s also a social event.”

Whilst the swim attracted many participants from outside of Henley, there were a number of local people who also got their goggles on for the event. Gemma Grange and Bekki Wedd — both Henley residents — took part with a group of friends. Gemma said, “It’s only the fifth time I’ve ever done an open water swim, so I’m pleased I did it. The other four were just social swims, so this is my first ever race. It was really good — a lovely atmosphere.”

Bekki said, “It’s nice having the events happening again, being able to do races and do them properly. I’ve done Club to Pub for the last three years. I did the staggered one last year, which was good but not the same hustle and bustle. I just love the vibe, and there are so many people we know that do it so it’s a nice community thing.”

The event, organised by Henley Swim, was held in support of Sue Ryder. Juliet Hume, Henley Swim’s Director of Operations, said, “After a change in venue in 2020, it was great to be back in the heart of Henley for the 2021 Club to Pub. You cannot beat the atmosphere at the Angel on the Bridge for the swim finish – every swimmer was cheered in, but the welcome for the last swimmer, with enormous applause from the bridge, the pub and Singers Park was tremendous.

“Registrations for the Club to Pub sold out in record time back in March. With the potential threat of Covid-19 restrictions and then lightning storms, we were kept on our toes until the very last minute, so we are delighted to have been able to deliver this popular event.”