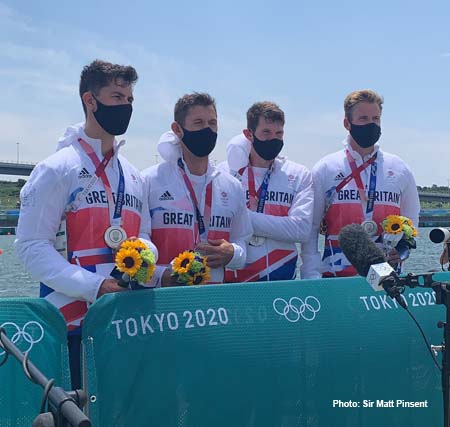 The all Leander Club Men’s Quadruple Sculls crew won a silver medal in the Tokyo 2020 Olympics in the early hours of this morning.

Harry Leask, Angus Groom, Thomas Barras and Jack Beaumont won the only medal for Great Britain in rowing on Day 5.  This was the first ever GB crew to win a medal in this boat class.

Drawn in lane one, they led the final early on and, although the Netherlands stormed through to take gold in a new world best time of five minutes 32.03 seconds, the Leander crew held off sprints from Australia and Poland to secure their silver.  Groom said afterwards, “We just backed each other, trusted everyone to do their jobs. We just said throw everything at it and the result will be the result – if we come sixth, if we come first and we came second. It was pretty much the perfect race for me.” Leask, who sat in the bow seat said: “We did what we wanted to in that first half and I was looking across. It’s just amazing.”

There was disappointment and the end of GB’s dominance in the Men’s Four race.   Matt Rossiter and Sholto Carnegie from Leander Club missed out on a medal completely after a steering error in the closing stages saw them veer very close to Italy in the lane to their right.  They had established themselves in second place through the middle of the race and looked set for silver but Romania and Italy stormed through in those final few strokes.

Two other crews missed out on medals, coming fourth; John Collins with his partner Graeme Thomas in the Men’s Double Sculls and Rowan McKellar and Karen Bennett in the Women’s Four.

In the semi finals, Polly Swan in the Women’s Pair with Helen Glover secured a place in the final by coming second and the Men’s 8 featuring Leander’s Jacob Dawson, Tom George, Charlie Elwes, Oli Wynn-Griffith, Tom Ford and cox Henley Fieldman secured a place in the final with second place in the repechage (second chance race). They massively improved from a disappointing heat, they started with real intent and led to halfway before New Zealand moved past.

The regatta came to an end for the GB women’s eight with Leander’s Fiona Gammond, Katherine Douglas and Emily Ford who missed out on qualifying from their repechage.