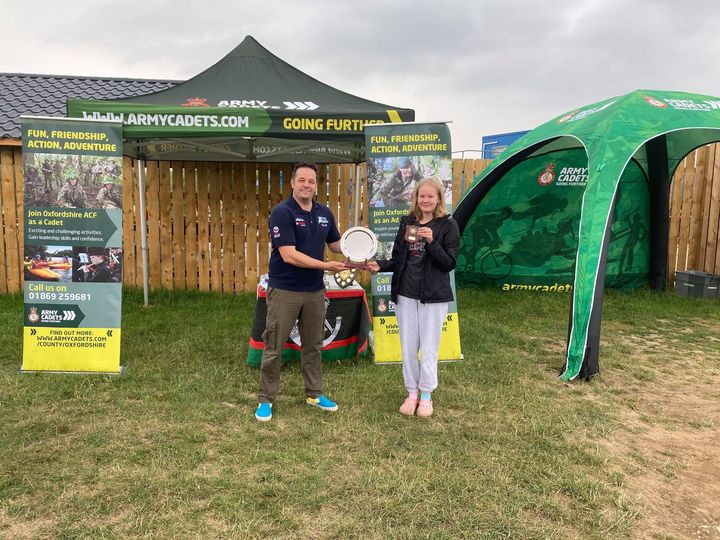 Lance Corporal Patrycja Gwiazda collecting the Allington Award on behalf of the Detachment.

This Summer, Army Cadets from Nivelle Company (South Oxfordshire) attended the Aqua Park in Oxford as a Summer Social Event. This was a great opportunity to come together as one since March 2020 and for the cadets & adults to be presented with the Annual Awards. During the past 12 months, Cadets from Henley have continued to perform in all aspects, such as attendance, development, cadet training within the Company & Oxfordshire Battalion.

The appreciation award is issued to the cadet that has supported their detachment above what is expected, excelled in a certain area or showed improvement. This was awarded to Cadets Serjeant Charlie James, Cadet Lance Corporal Rhys Beaumont & Cadet Lance Corporal Patrycja Gwiazda for their continuous development at Detachment and their support with the Battalion Recruit Cadre Intake.

The Commander’s Award of Recognition

This was awarded Serjeant Stephanie Green. She has worked with their Detachment Commander to improve Henley in so many ways, from growing a successful NAFFI, taken the role of Detachment Quartermaster and being part of the Detachment Leadership team.

The award is given to the Senior Non-Commissioned Officer that over the last 12 months has stood out as a role model and shown high levels of competency as a leader. This was awarded to Cadet Colour Serjeant Jessica Smyth for support to the Company Virtual Parades, continuous progression in all aspects of cadets and her ability to lead others.

This is awarded to the Cadet Force Adult Volunteer who in the Serjeant Majors opinion has been the most resilient over the last 12 months. This was awarded to Serjeant Instructor Matthew Case, who has continued to develop in both the ACF & in his personal life.

Massive congratulations to all the award winners. Well done to all cadets & staff from Henley Detachment for all their hard work and dedication to the ACF during a challenging year.