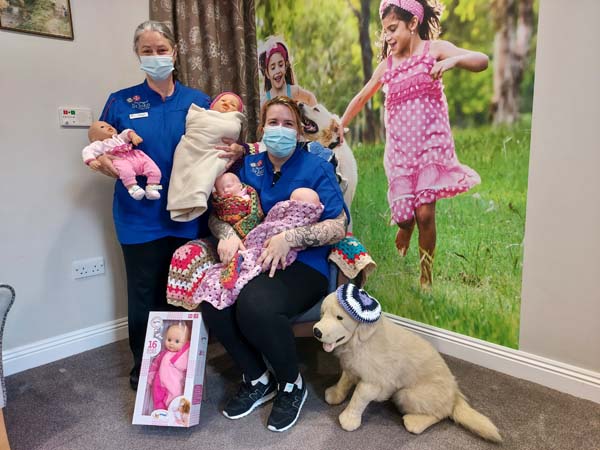 The Henley Recycle Facebook group started during the pandemic when the charity shops were all shut for people to get rid of their unwanted items or to ask for things before buying new.
The group has grown to over 3,000 members with daily posts offering household and garden items, toys, books, unopened food, old bits of wood there’s not really anything that doesn’t find a new home.  Members can also ask for items they are looking for before they decide to buy new.  There was one recent post though asking for baby dolls which caught the eye of many members by Hannah Fearn and Denise Hayes who work at Chiltern’s Court Care Home:
“Working with those living with dementia, having things such as baby dolls really support the elderly and is so calming for them, and love that they have the chance to hold a baby again! At Chilterns Court unfortunately we only have one baby doll that all of the residents absolutely adore and share around.  I am asking if anyone has any baby dolls that they are willing to donate for us to have on the dementia unit at Chilterns Court Care Home in Henley! I can collect from anywhere in Henley

“
There was a large response including people who wanted to buy a brand new doll for the home and someone else who wanted to donate crochet baby blankets for the dolls to be wrapped in.

Denise said, “Here in our dementia household at Chilterns Court Care Centre each of the residents living with dementia is on a different journey. Something that one person finds comforting may not have the same effect on another, so we like to encourage the right form of support for each person.

“Several of our residents find it therapeutic to hold and care for a doll as it helps them to reminisce and takes them back to when they were a new parent or grandparent, which is often a time they might associate with feelings of great happiness, love, and contentment.

“Although they might seem like simply children’s toys, to these residents the dolls mean a lot more, and we are so delighted that this kind donation from our local community here in Henley will have such a positive impact on the lives of some of our residents who are living with dementia.”

Jo-Anne May, Admin of Henley Recycle Group said, “It was an unusual post but one that touched many people hearts. To think of the joy the dolls bring to the residents is something we would not necessarily have known about had the request not been put on the group. The response was amazing with lots of members offering not only dolls but clothes and blankets. Showing what a great community we have.”

Check Your Registration on Electoral Register
Scroll to top