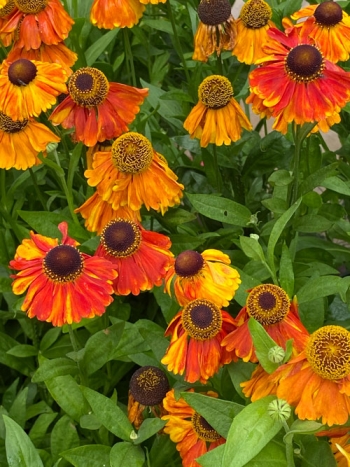 August is all about harvesting.  This is the month when we remember why we grow fruit and veg.  Food that’s seasonal and freshly picked tastes amazing! If we plan ahead now we can make sure we also have something fresh to pick through the autumn and winter.

A few of the seeds we can sow now

Greener Henley member, Jean, will be sowing winter lettuce varieties this month ready for planting out in her garden in September/October.  She’ll also be sowing more beetroot and some giant winter spinach – a plant I don’t know at all.  Time to investigate as it sounds intriguing.   Dave and Sally from Greencroft Allotments will also be sowing salad crops which they will cover with cloches as the weather gets colder. Apparently, the rocket and mizuma they sowed last year in early September gave them a supply of leaves through the winter.  It has to be worth a try!

Dave and Sally keep us up to date with their progress:

“Main crop potatoes (Charlotte and Desiree) are ready for harvesting and putting into store in the shed – hopefully to see us through until next April.  Runner beans, courgettes and marrows are in full swing.  French Beans were eaten by slugs and snails as soon as they appeared, but the third sowing in pots is about to be planted out and will hopefully give us a late crop in September.  There’s still soft fruit to be picked.  Summer raspberries are finishing but the Autumn varieties will start cropping soon and go on until the first frosts.  We have a very early cultivated blackberry which is also ready for picking by mid-August.”

I sympathise with the bean problem although my French beans have been fine – particularly a purple variety called ‘Blauhilde’.  I’m growing it in two different places on my plot and the plants have hardly been touched by slugs or snails.  The Runner beans on the other hand, are the least successful I’ve ever grown.  There have been a couple of days when I’ve picked enough to share with neighbours but mostly it’s been one meal’s worth of beans at a time. In summers like this one, we could do with more thrushes, frogs, toads, and hedgehogs on the the allotments.  How can we create a better eco-system?

Now is the time to plant out the leeks that we sowed back in the Spring.  On Greencroft Allotments, Andrew puts his in the space left as he digs his potatoes.  I do the same, adding the leeks row by row as the potatoes are lifted.  Jean will planting hers in her small garden.  Dave and Sally are covering theirs with mesh to try to protect against the leek moth that ruined their crop last year.  According to the RHS, the leek moth is a relatively new pest of leeks and onions ‘found mainly around the south east coast of the UK’.  It’s obviously a keen traveller. Let’s hope it doesn’t work its way around the plots this winter!

Andrew’s advice is to rub out the leek seeds with your fingers.  Put the seeds in a measuring jug and add water.  The good seed will sink.  Skim off the chaff.  Strain the seeds through a sieve. Put on newspaper to dry.  When dry, store in a paper bag in a cool place. Andrew stores his in a drawer in a spare bedroom.

How exciting to hear that a Greener Henley swift box on Trinity Hall was used in its first season. The birds seem to have left Henley now. My neighbours and I are hoping that one of the many that swooped low over my new swift box, will come back and nest next year.

Have a happy August!