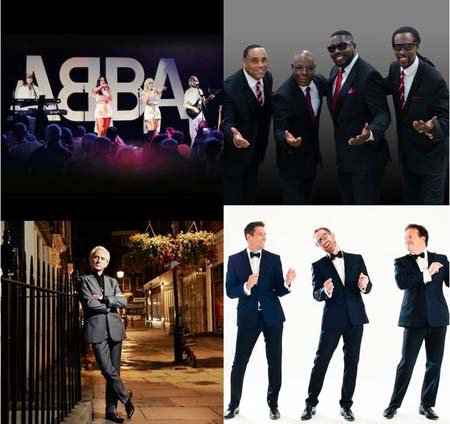 There’s some great music shows coming to the Kenton Theatre over the next few months.

Jazz In The Round returns on 8 September.  Led by emerging drummer Max Wright this trio is something special. Pianist Jason Rebello has performed with the likes of Sting, Wayne Shorter and Branford Marsalis. On double bass, Yuri Goloubev, whose mastery of his instrument has earned him great critical acclaim.  Playing a mixture of their own compositions and interpretations of jazz classics, this won’t be your average jazz trio.

ABBA Sensation return to Kenton on 17 September.  Considered to be one of the best Abba Tribute Acts, ABBA Sensation pack out theatres and festivals across Europe. They have a stunning stage show, which combines costume changes, lighting effects and a faithful reproduction of the Abba sound. The band love audience participation, so you can sing along, clap or even get up and dance. If however you are ‘too posh’ to join in, then no problem, just rattle your jewellery!

Is soul music your thing? Soul Kinda Wonderful comes to the Kenton on 18 September.  The UK’s No 1 Tribute to the legendary Drifters come to the Kenton. Lead vocalist, Richie Sampson, has performed alongside former long standing members of The Drifters and the band breathes new life in to the classic Drifters hits such as ‘Under the Boardwalk’. Their show combines The Drifters greatest hits along with other classic Motown & Soul favourites from artistes such as The Four Tops & The Temptations this is Soul and Motown at its very best.

The Salts: Songs Of The Sea on 23 September are one of the most exciting and energetic concepts around performing original material alongside their own interpretations of the traditional Sea Shanties that we all know and love.  Their live shows have been going down a storm throughout the UK at festivals and venues alike, recent performances include the Great British Folk Festival, Folk in a Field Festival, and our particular favourite…The Pirate Festival Brixham.  So, Salty Sea Dogs of Henley…Grab your parrots, eye patches and cutlasses (cutlasses not permitted in the theatre) and come along for a grand old evening.

The Rat Pack Of Opera, and number 1 selling classical voice trio Tenors Unlimited: That’s Amore come to the Kenton with their new show on 1 October. They recently won The Broadway World Best Touring Show Award and promise to take you on a journey through some of your best loved songs from the likes of Pavarotti, Sting, and Freddie Mercury. They’ve played alongside the likes of Beyonce, Lionel Richie and the Royal Philharmonic Orchestra in a career that has seen them entertain audiences around the world for over 15 years.

Legend Tony Christie is coming to the Kenton for one night only on 2 October.  He has recorded million selling albums and singles, performed in the world’s best-known arenas and major festivals including Glastonbury and has found fame all around the world in a career that spans five decades. This exciting new tour sees Tony perform all of his Greatest Hits including I Did What I Did For Maria, Walk Like A Panther, Las Vegas, Avenues & Alleyways and the Number 1 single (Is This The Way To) Amarillo. Joined by his superb band, this is an evening not to be missed!

Classical music lovers will love the Budapest Cafe Orchestra (BCO) on 10 October.  A small but impeccably formed orchestra of just four players, the BCO combines violin, guitar, accordion, double bass, sax & balalaika creating an aural alchemy so awesome, normally only characteristic of far bigger ensembles. Two of the country’s most revered international soloists revel at the heart of proceedings. They play a blistering barrage of traditional folk and gypsy-flavoured music from across the Balkans and Russia.  Evoking vivid images of Tzigane fiddle maestros, Budapest café life and gypsy campfires – a show by the BCO is good enough to make you want to book that holiday down the Danube!

Celebrating The Music Of Yusuf (Cat Stevens) on 6 November will see Keith James, a long standing, well-respected and inventive concert performer who specialises in playing intimate, carefully researched biographic style concerts of those he has studied and revered as writers over the years.  He weaves the story of Cat Stevens’ life from his early pop career, life threatening illness and spiritual journey around a performance of his beautifully-crafted and memorable songs. Proceeds and audience donations from this tour of concerts will go to the UNICEF UK Syrian Children’s appeal.

For more details and to book tickets go to www.kentontheatre.co.uk