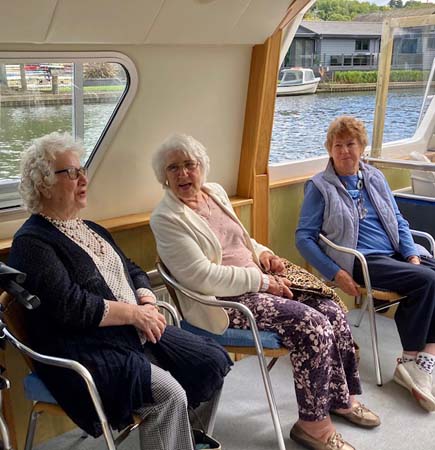 The tradition of  WI members taking a break from monthly meetings to go on an ‘Annual Outing’ goes back to the early days of our organisation.  Before the era of family cars, members would decide where they wanted to go and hire a “chara’,  now known as a coach.   A recurring favourite was a boat trip on the Thames.  On 11 August 1932 the Greys secretary of the time wrote in our monthly records;   “Greys had their Annual Outing, with 18 members and 2 visitors.  We met at Hobbs boathouse for a trip to Mapledurham in the launch “Enchantress”,   and really enchanting the trip proved to be….”   In 2021,  after 18 months of lockdown, the present members decided that their ‘Outing’  would be a trip on the river,  in the footsteps – or should that be the waves –  of members 90 years ago.

We found ‘Rivertime.’ This is a non profit organisation that takes less able people of all ages for trips on the Thames.  As some of our members are not as nimble on their pins as when they were younger, your chronicler included,  this sounded ideal. Lucy, the Head skipper, manages it all, helped by a team of 40 volunteers. So, with Lucy at the helm, and with the help of volunteer Richard, off we went for a 2 hour cruise,  through Marsh Lock as far as the George and Dragon at Wargrave,  then back under Henley bridge and along the regatta course as far as the Management College,  returning to the River and Rowing Museum jetty.  The weather was sunny, and as Rivertime glided along the river,  we all relaxed, and enjoyed the peaceful atmosphere.   Well, as peaceful as is possible with a group of WI ladies enjoying themselves.  Lucy got us in and out of the lock, Richard produced tea, coffee and biscuits, the sun shone,  and as we disembarked we all agreed that our time on the river had been fantastic.

Many thanks to Lucy and Richard of the Rivertime Boat trust. 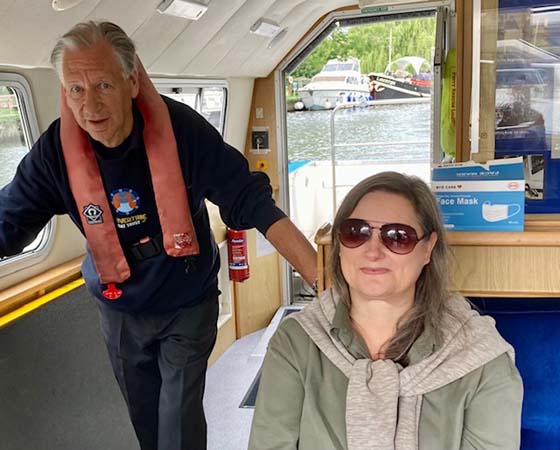