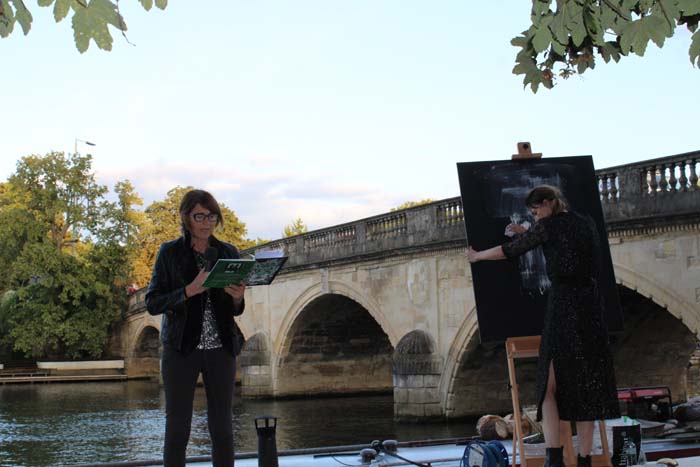 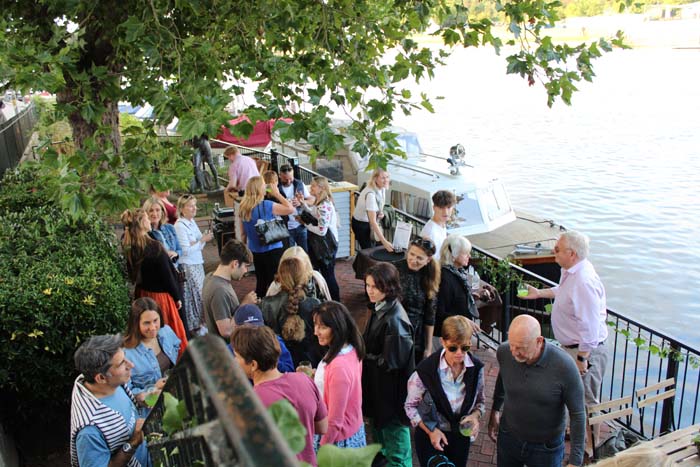 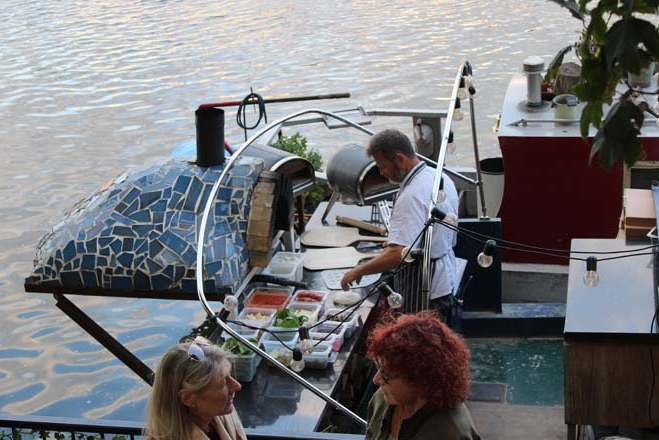 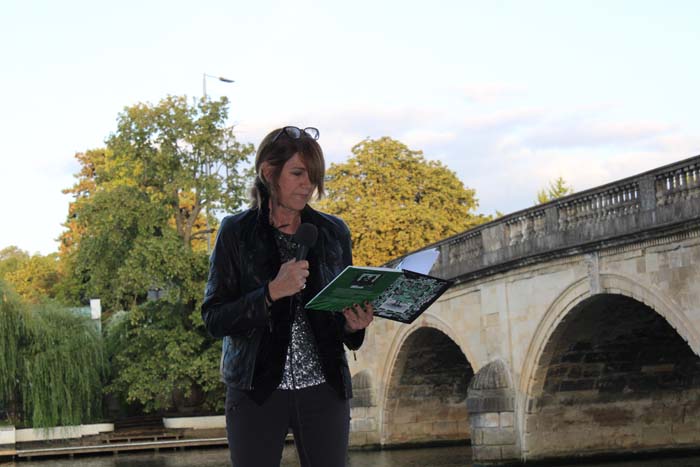 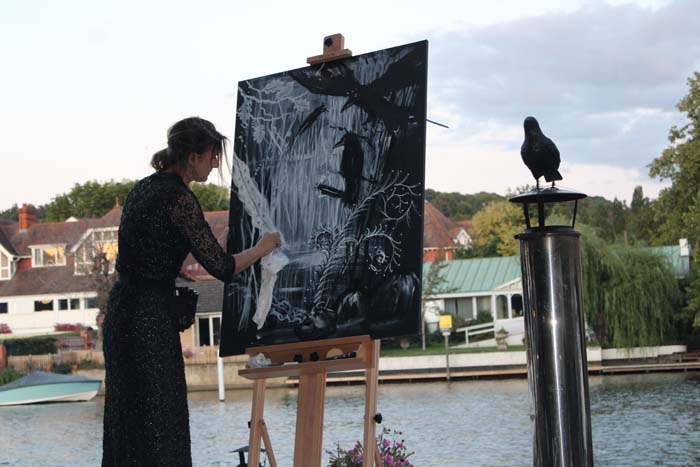 There is a green hill, far from smog and city’s spill…. is the poignant opening line from The Green Man and The Raven’s Quest book which was read by author Sarah Bell at the Poetry & Pizza event on The Terrace at the Red Lion Lawn on Tuesday evening whilst the book illustrator Nicola Sutherland started her raven drawing.

Sarah and Nicola have been friends for over 20 years and collaborated for this first book which was published in April this year.  The story tells the quest of a young person who is trying to save her dying father.  The Green Man is watching over her like a father figure but she is not aware of him whilst he is lamenting the death of the planet.  The two stories run align and are entwined.  Both are in a race against time but will they be able to stop death’s relentless stride before it’s too late?  There is a strong message about the consequences of littering our natural world and the cost to the environment, but there is still hope that youth, courage, wisdom and compassion will save the planet.

Where crows dictate cruel nature’s lore.
Upon this cold and blustery moor the tale of woe begins:
A father lying gravely ill, while daughter still blushed with bloom of youth,
Sits by a fire, flinching at the painful truth:
Father’s end is near.

The sold out event which combined poetry with delicious themed pizza from the Pirate Pizza barge which the top of provided the perfect stage for the two friends.

Sarah said, “Philippa Radcliffe at The Terrace Bar suggested it back in June as a possible event. It’s the first time Nic and I have done anything like this before, but we both really enjoyed it. Having Justin and George from Pirate Pizza was a genius idea, and also meant we had a ready made stage. George then read a few of his poems and clearly is a professional. He was brilliant, funny and a natural comedian. I really hope we can work together again.  The positive feedback has been rather overwhelming! It was a great way to ‘cut our teeth’ for future live events. I know there were a lot of people who didn’t manage to get tickets – hopefully they will come and see us at Henley Literary Festival.”

Philippa Ratcliffe of Experience Henley, working in partnership with Henley Boating Company at The Terrace at the Red Lion Lawn said, “The performance on the terrace the other night epitomises what we’re wanting to do in this unique space. I spoke to Sarah & Nicola about coming down to The Terrace to perform their poetry and artistry from their book The Green Man and the Raven’s Quest one evening, and they loved the idea. Then in conversation with Justin Whelan aka Pirate Pizza when he was at The Terrace for the River & Towpath clean, who is also a big poetry fan, he said he would love to be involved and it went from there really.

“Having Sarah and Nicola perform on top of the barge was inspired by Justin and it just showcases what can be done with a little creative thinking. Everyone thoroughly enjoyed the evening of cocktails, pizza, painting & poetry. We were also treated to a guest performance of poetry by the hugely talented George Copping to round off the evening’s entertainment. We can’t wait to do more and if anyone is interested in performing or doing any kind of activity on The Terrace, please get in touch. Follow our social media to look out for more pop ups, community projects and art & culture events.”

If you missed this event, Sarah and Nicola will be appearing at the Henley Literary Festival on 10 October at 4pm at the River & Rowing Museum.  To book tickets go to https://henleyliteraryfestival.co.uk/whats-on/sarah-bell-nicola-sutherland/