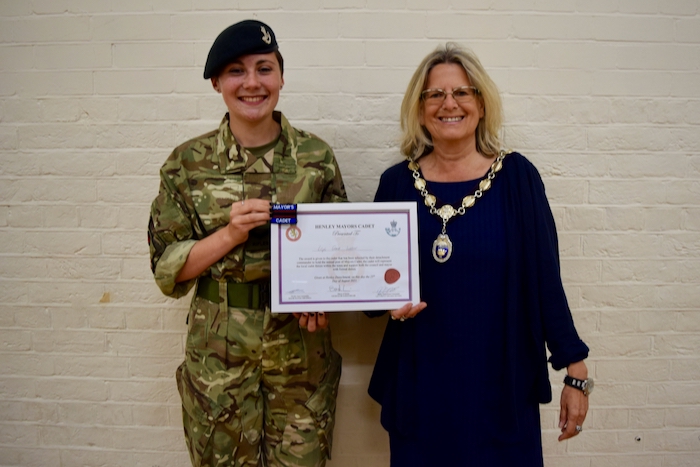 Henley Army Cadet Grace Iveson has been awarded the prestigious rank of Mayor’s Cadet — the first in Henley for several years. Last week, L/CPL Iveson was presented with a certificate and badge by Henley Mayor, Councillor Sarah Miller. Grace will be working closely with the Mayor and Henley Town Council over the next 12 months, supporting Councillor Miller in her formal duties.

Major Wayne Thrussell, Company Commander for Oxfordshire Army Cadet Force, explained the significance of the Mayor’s Cadet: “The Mayor’s Cadet is a huge honour to the cadets. They have many things that they work towards: what we call APC, which is our proficiency service; the second being military promotions starting from the rank of Lance Corporal; but one of the most esteemed ones is the Mayor’s Cadet. In each detachment we have one Mayor’s Cadet, and that person is usually picked out for certain skills. They will be confident, mature in their age, someone who stood out from the other cadets and can represent us well.”

Grace Iveson was one of seven cadets to put themselves forward for the highly respected role. 2nd Lt Mel Haynes, Detachment Commander for Henley, was responsible for choosing the Mayor’s Cadet, and decided to conduct interviews to best assess the candidates. She said of the cadets: “They all tried their hardest and put in a good performance, which was really good to see. They all prepared something and were all smart and well disciplined. It was good to see that sort of level, which obviously when you are doing Mayor’s cadet duties, you have to represent us in the best possible way.”

The seven hopeful cadets were asked the same three questions by 2nd Lt Haynes, and it was Grace’s confidence that really shone through. “The thing that won it for Grace was that she was very calm in her interview; she performed very well under pressure,” explained 2nd Lt Haynes. “She is very mature and switched on. I’ve never had to tell her to do anything; she just knows. She’s got a really good skill of just watching something and thinking, that needs doing, this needs doing — her finger is on the pulse. I think she’s really looking forward to it, and she’s the best cadet at this detachment at this moment in time for the role.”

Grace said about her achievement, “It’s incredible. I’m so happy; it’s an amazing opportunity. I get to do this for a year and then hand it over to someone else, but I age out in a year and a half so this is my last opportunity to do it. I don’t have much time left and I joined a bit late, so the more I can do the better. What I can bring to it is good communication, good opportunities, and generally bettering our detachment and our community.”

As well as attending to her duties as Mayor’s Cadet, L/CPL Iveson will be attending Henley College in September. She then hopes to have a career in the Army after completing a degree in Political Science and International Relations.

The Henley Detachment of the Army Cadet Force is one of the most successful in the country, parading between 30 and 40 cadets each week. Commander Thrussell said: “The idea of the army cadet force is to give young people the opportunity to best prepare themselves for whatever future they want. They will learn skills such as shooting and field craft and camping, but generally the stuff that they remember is teamwork, stakeholder management, conflict management, leadership and innovation, and that’s what we want to give them. The idea is to give them the best possible start we can, and in a really active manner. We’ve moved away from written exams, tests and coursework, and it’s more about active learning.”