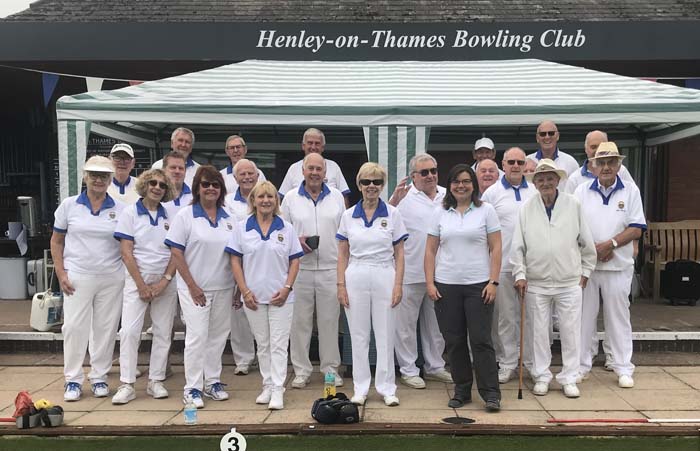 On 1st September, Henley entertained Maidenhead Thicket in a four men’s triples friendly losing to a much stronger team on all four rinks by 39-98. Nigel Bridges, skipping in his first match of the season, with Keith Lawrance and new bowler Martin Taylor were many down, but picked up some to go down 12-23. Kevin Browne with Maurice Robins, who had a good match, and John Wilkinson were evenly matched and two up after ten ends, ahead by one after sixteen ends, but dropped four to go down 15-18. Peter Borsberry with Jim Walter and long standing member John Cross, struggled throughout going down 7-29. Richard Kingston, skipping for the first time this season, with Jim Turner, also a new member this season, and Brian Duddy went down heavily 5-28.

September being the last playing month of the season, sees the culmination of our Knockout Competitions with the majority of the finals being played next weekend on 11th and 12th September. 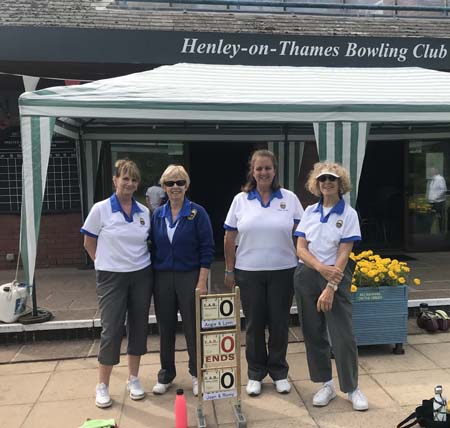 As one of our finalists can’t make it next weekend, the Ladies’ 4 Wood Pairs final took place on the afternoon of 2nd September. The finalists were Romy Painter and Joan Edwards against Lynn Sayer and Angie Isaac in a game played over the usual 21 ends. Romy and Joan took the lead from the start and built up a healthy margin over the first 12 ends. At that point, Lynn and Angie started clawing shots back, putting their opponents under pressure. They continued to press to the very end but just ran out of ends with Romy and Joan winning by 3 shots (pictured on the right).

On 2nd September, Henley consolidated their top of the table hold on the Oddfellows Triples League when they visited Hurst, winning on four of the five rinks by 91-61, gaining twelve points to Hurst’s two. Barrie Davies with Peter Borsberry and Jo Wilson were in complete control running out winners 22-7. Gill Robins with Colin Ward and Richard Kingston raced to a 12 shot lead after twelve ends, then 15 ahead after sixteen ends, dropping 6 in the darkness, but still winning 19-10. Dave Wilson with Kevin Browne and Jeanie Davies were evenly matched after nine ends, then pulled away winning 18-10. David Burdon with Andy Scott and Joan Edwards, having played 23 ends in the afternoon’s Ladies 4 Wood Pairs final, we’re evenly matched throughout, and just won in the darkness 16-15. Norman Daniells with Simon Hatcher and Angelika Crisa were evenly matched throughout and 16 all going into the last end, holding 1 with one ball remaining only for the Hurst skip to pick up the jack and score 3, so Henley went down 16-19.

On Sunday 5th September, the Club played one of it’s One-Day Competitions, the Mixed Triples. 24 members competed in 2 pools of 4 teams each in a round-robin tournament of 3 games each. It was very encouraging to see five of our new members taking part. After an initial misty start to the day, the sun soon came through and a lovely day of bowls was had by all. Colin Ward, with Kevin Browne and John Rees won the blue pool and David Burdon, Jeanie Davies and Bill Mundy (pictured below) won the red pool with David Burdon’s team coming out top in the final. 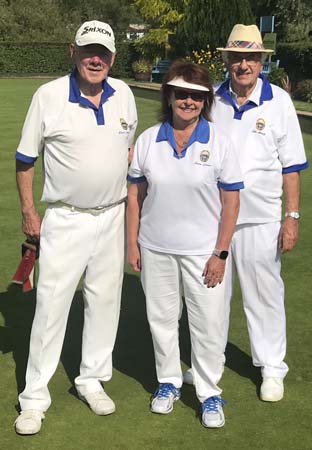 The Henley Herald website provides an up-to-date and unbiased digital news service for
Henley-on-Thames
Exhibition Celebrating 500 Years of Artists’ Fascination with the Sky...