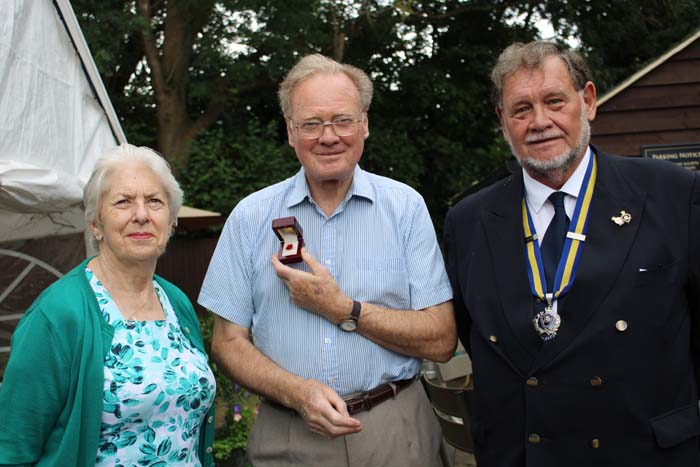 Nick Launders, the Peppard Poppy Appeal Organiser (POA) organised a thank you lunch for all his volunteers at the Unicorn pub last week as he is stepping down from his role after 10+years and Sara Abey will be taking over POA role for the whole of Henley & Peppard areas this year.  Nick was presented with a special Poppy badge by County Chair of the Royal British Legion Oxfordshire as appreciation of his hard work.

Nick joined The Henley & Peppard Branch RBL when he moved here in 1993.  He served in the army in the Gunners regiment for 33 years and then moved to information technology in the last 10 years before retiring in 1995.  Nick got involved with the Poppy appeal straight away as a volunteer to do house-to-house collections.  He and his wife (Sue) then started to help the former POA when she became less well and took over the role in 2010.  He organises house-to-house, schools and static box collections in the Stoke Row, Rotherfield Peppard and Greys area.  The area has raised around £3,000 over the year prior to Covid.  Asked whether he had a highlight from his time over the last 10 years, Nick replied, “Funnily enough, my highlight was during the pandemic as we couldn’t do anything.  We were running a remembrance event in the church yard at All Saints and people wanted to contribute to the poppy appeal.  We collected £150 from just people spontaneously donating as the realised the poppy appeal was on and I hadn’t asked for anything.  It was unexpected highlight that was unexpected on a day I thought would be very difficult.”

Raising money for service personnel and families is very important to Nick.   Nick commented, “The way that the money is stretched is that we share the burden with other military and civilian charities too.  Somebody who needs a stair lift or wet room puts in a claim and the local authority are supposed to provide these things but are are often too late.  Local authorities are also naughty because they take things that we have fitted out when somebody dies, instead of putting someone else in the same house with the same needs. The waste is appalling.  There needs to be more co-ordination to make best use of resources.  There are hundreds of limbless, sightless and servicemen who can’t hear from our troops being in Afghanistan for 10 years.  They are mostly young soldiers, in their teens or young twenties and that need is not going to go away.  The poppy appeal needs to meet the needs of not just the people who were injured but their families as well.  Add to 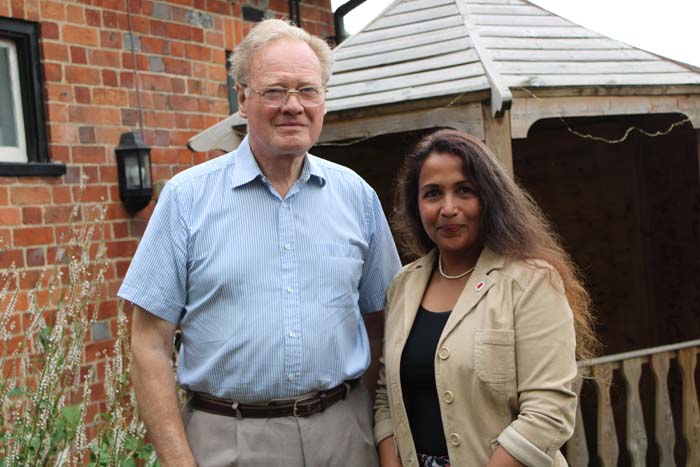 that mental health which has been fairly late in being identified is also very important.”

County Chairman of the Royal British Legion Oxfordshire, Peter Eldridge, said, “I’ve been in the role for the last 18 months and because of Covid this only my third social event so I’m very pleased to come and meet you all today.  I am too a PAO and I know all the stresses and strains involved in being one.  Nick’s main effort is house to house and I know it is not easy to organise. The poppy appeal starts in June when you order everything, then you need to store all the stuff.  In September you need to organise people ready to go out at the start of November.  I appreciate the amount of effort that goes into running a poppy appeal and delighted to present you with this (poppy badge) as appreciation for all the work you have done.”

Sara Abey (pictured right with Nick) was inspired to the join the local RBL branch after a meeting with the super collector Brian Hughes who was awarded a British Empire Medal in 2017 for his service to the RBL and collected over £60,000 for the poppy appeal.  Sara said, “I am in debt to Nick for this stunning handover, done it in such style. I wish all handovers were thoughtful as this.  Also a huge thank you to Nick’s volunteers who are staying on to help me. There is no Poppy Appeal without volunteer support. I feel privileged to inherit a passionate, long-serving team like them.  I have served the Legion with Nick for a few years now and observed how his mission to find and help local members of the Armed Forces in need is relentless – and has been very successful. It is commendable how he did this, as well as organising the Peppard Poppy Appeal to raise funds to help the wider Armed Forces community in need. I will miss Nick.  The courage and the goodwill of servicemen and women are something I admire hugely. So, it is a privilege for me now to be able to give back a little to them when they are in need. I am honoured to be leading Henley and Peppard Poppy Appeal now, and hope to continue the successful fundraising Nick, Brian and many others have achieved in the past. And, dear to my heart, really make it a Poppy Appeal that all generations can relate to.” 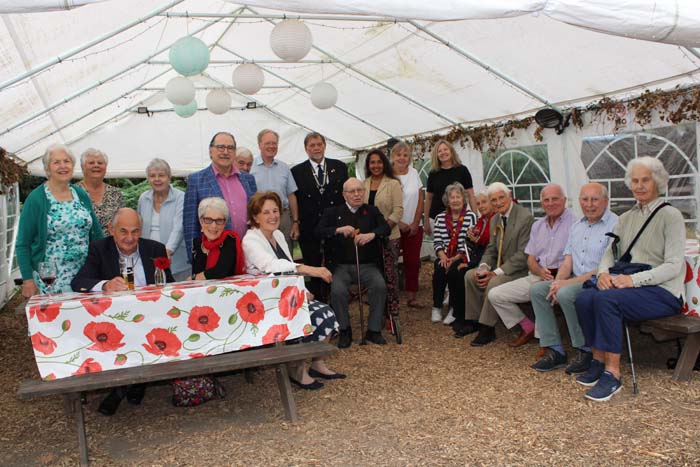