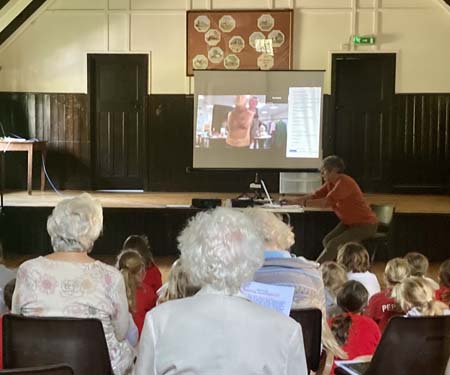 The wizardry of Harry Potter spell bound members of the Greys WI last week along with children from Peppard Primary School.

Perhaps not where you would expect to find Harry Potter, the Boy Wizard – but you would be wrong. Greys WI invited Harry to their September meeting by contacting Julie Green, the Education Manager of the Harry Potter Experience at Warner Bros Studio near London. And – Harry came, via an interactive film screen. Since the average age of Greys WI Members is rather more than most Harry Potter fans, they also invited pupils of Peppard Primary school, and 31 came, plus their teachers.

Merryl Roberts said, “It is fair to say this was not a usual WI Meeting, but it was enormous fun. Greys village has problems with wi-fi, but our Treasurer, Ina Chantry and Chris, her husband, somehow managed to overcome this with a dongle, modern magic to many of us. Julie Green not only appeared on an interactive screen and demonstrated many iconic items from the films, but also was able to answer directly many questions from the children. One small girl put up her hand, said she didn’t have a question but she would like to see more of Harry’s magic clothes, and Julie immediately displayed a Harry robe. So, a very magical mix of excited children and interested WI members filled our hall.”

Afterwards the children were given fruit juice and a biscuit, plus a book on the making of the Harry Potter Films, and then, still chatting excitedly, departed in the Peppard school bus. Merryl added, “Peace reigned again, and we had a lovely cup of tea. A truly memorable WI Meeting. Thanks to Julie, of the Harry Potter Experience, the incredibly well behaved children of Peppard school and their teachers, and especially member Ina and her husband Chris, without whom this would not have been possible.” 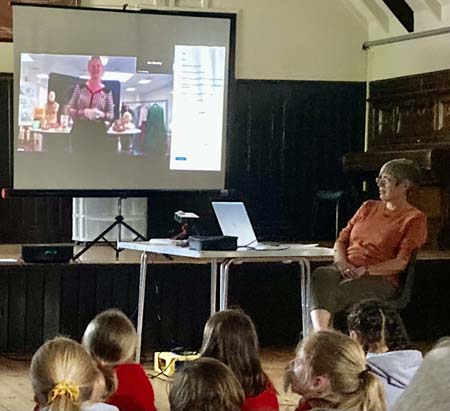