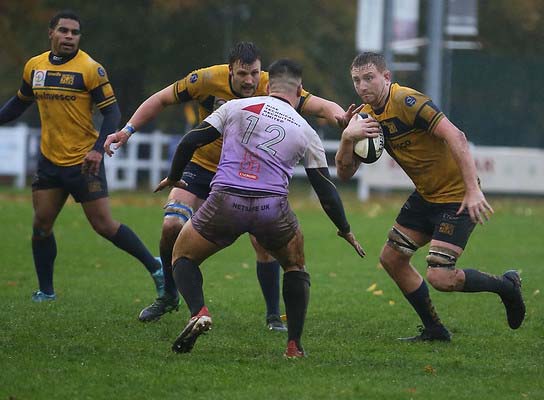 Saturday will be an emotional day for everyone associated with Henley Rugby Club as the Hawks return to action for the first time since the tragic passing of Henley second row Dave Hyde after the game with Old Albanian two weeks ago.

The club are coming to terms with events a fortnight ago but the ‘rugby family’ has helped enormously and the club have been overwhelmed  with messages of support from individuals and rugby clubs from all over the country. The funeral is being held on Friday.

Henley Rugby Club have set up a GoFundMe page and the generosity of the rugby family has been outstanding with just over £72,000 raised so far for the Hyde family. There is still time to contribute by linking to https://www.gofundme.com/f/david-hyde-fund?

The club would especially like to place on record their sincere thanks to Hinckley RFC and Redruth RFC, the two clubs who agreed to reschedule their games against the Hawks with help from National League Rugby. Both games have now been rearranged.

So Clifton RFC are the visitors to Dry Leas on Saturday as the Hawks return to National League 2(South) action with a large crowd expected to pay tribute to Dave Hyde and his family.

An added interest to this weeks game is that Clifton come to Oxfordshire as league leaders having won their first three games to date. They opened the campaign with a 71-0 demolition of Barnstaple, then won a hard fought game at Leicester Lions 31-24, before seeing off Barnes last week, 57-10.

Clifton RFC are a proud Bristol based club and one of the oldest in the country. Head Coach Matt Salter has assembled a strong squad and games with the Hawks are always hard fought affairs. In the last completed season, Clifton finished fifth, one place and twelve points behind the Hawks. However, Clifton did the double over the Hawks that season, a 20-17 win at Dry Leas followed by a 20-10 win at home. Saturday’s game should be a close and exciting encounter.

Elsewhere in the league, Esher and Old Albanian have also won all three games so far while Redruth also have a 100% record, having won both of their starts.

Also taking place at the club on Saturday is the Henley Beer Festival. A large selection of draught beers and ciders will be available and live music will be provided by Adam Isaac and Bloc off the Wall.

A positive for Henley this week is that rugby is definitely back and that four sides will be taking to the field this weekend.

As well as the Hawks, The Henley Bulls (2nd XV) travel to Chinnor on Saturday for a friendly. This game kicks off at 12 noon to enable the players to get back to Henley to support the Hawks.

The Henley Vikings (3rd XV) start their BBO Division 2 South season with a home game against Reading 2nd XV. Kick Off is at 3pm.

On Sunday, Henley Hawks Women play their first league game of the season at home to local rivals Reading Abbey Ladies. Kick off at Dry Leas is at 2pm.

The dates for the rearranged games are :