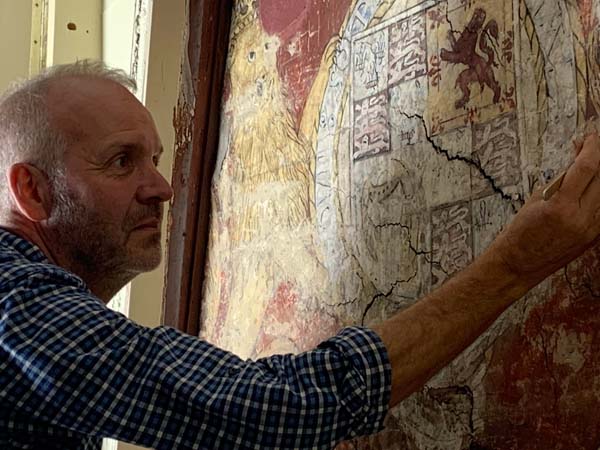 Being the custodian of such an iconic historical building, owners Grace Leo and Tim Hartnoll of The Relais Henley at the Red Lion have not only preserved and restored the architectural heritage they have also invested in conserving important interior artefacts including a wall painting of Charles I’s coat of arms dating back to 17th century. The painting is understood to have been painted to commemorate a Royal visit in the room where the King stayed overlooking the River Thames.

The conservation of the Charles I painting was done by specialist painting conservator, Mark Perry commissioned by Translation Architecture.  Mark was impressed that so much of the painting remained. So many have been damaged from being in domestic settings where they were similarly painted on chimney breasts. During an 1897 refurbishment, the painting was discovered and then enclosed behind glass by the Victorians. Mark commented, “When they discovered it, they kept it uncovered and actually made an effort to preserve it suggests that they were interested in it. They really liked to see the structure of a building and the stonework.”

The first part of the Mark’s conservation work was to stabilise loose plaster and clean the surface dirt.  The painting was composed of water-sensitive pigments which meant that Mark couldn’t “just roll swabs directly on it” He explained, ‘It would have just picked the paint up. The colours are quite powdery now and water sensitive. So it’s a case of cleaning through a barrier.” He used Japanese tissue and a cotton wool swab moistened with some water using a rolling action to draw the dirt out.

The paint was applied directly onto the brick that had hair plaster applied to it (‘horsehair mixed in with a lime mortar’). From a conservation point of view, Mark commented “One of the main reasons why so much of it has survived because the hair meshes together so if you get cracks, or things like that, it’s actually still bonded.”  The white limewash ground was applied to the surface and then colours were gradually built up. Samples of paint were taken for analysis and cross-sections revealed layers of paint. Mark explained, “You can do various tests to find the types of paint. Basically the red and yellows are earth oxides. The other principal colour is the blue which is Smalt. It’s a silica type pigment prone to fading. Oils were not used for this painting because if you mix Smalt with oil it goes dark, it discolours.”

Mark sourced the paint colours from grinding up earth pigments you get in stones and quarries for the yellows and reds.  The black came from charcoal and the Smalt by burning pigment.

One of the most distinctive aspects of the painting is the graffiti that Mark identified as he started to clean. He identified names and dates that tell us that the graffiti is from different historical moments.  He said “The earliest date I found was 1662 so within 30 years this was already being defaced.”  The graffiti might have been not only about individuals marking their own presence at a point in time but also about political interests and the defacement of something associated with the Stuarts once they had fallen out of favour. Following civil war and the execution of Charles I, Cromwell became lord protector of England, Scotland and Ireland from 1653 to 1658. A lion and a unicorn, with anthropomorphic character, are clearly seen in the painting. The lion, representing England, is on the left-hand side of the shield while the unicorn, representing Scotland, is on the right.

The lion and the unicorn each stand on their hind legs while holding a circular shield enclosing a square-shaped, quartered coat of arms. There is a central crown above the shield embellished with white dots which Mark thought are “meant to represent pearls – a very simple decoration.” The commonplace motif of a lion above the crown is absent in this coat of arms.  Mark commented, “There’s not really enough room for that here so it may be that they’ve decided not to paint one. On the other hand, it might be that they changed the structure of the room and therefore that bit has been lost.”

Grace said, “We had not realized the significance of this historic relic inside The Relais until we brought in our heritage consultant Katherine Davies and wall painting conservationist expert Mark Perry who have authenticated the age of the painting. We have taken great care to conserve and stabilize the artifact so that that it will be available for generations of Henley residents and visitors to see.”

The room that the painting is in has been named the Charles I room and is behind a door to protect it further for future generations to come.

The Henley Herald website provides an up-to-date and unbiased digital news service for
Henley-on-Thames
Campaigners Calling For You to Have Your Say on County Council’s New Freight...