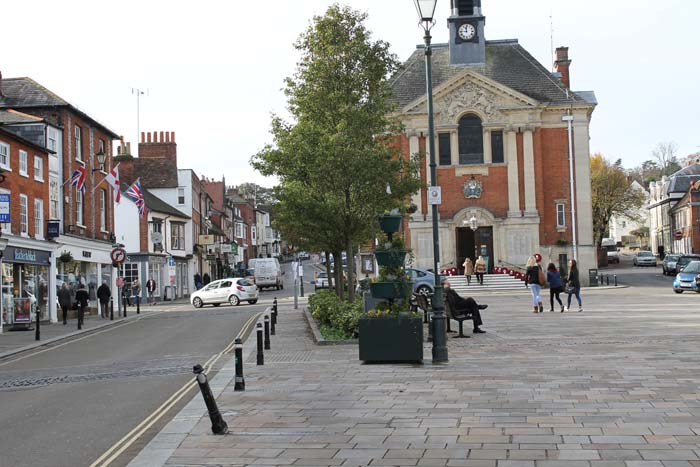 At Henley Town Council’s Full Council meeting on Tuesday evening, Henley Mayor, Councillor Sarah Miller proposed a motion to withdraw the plans to do a trial pedestrianisation of Market Place once a month on market day (Thursday).

Sarah proposed the trial in 2020. She said, “Back in 2020 after initial discussions with a few local traders in the town I suggested we trial a road closure to allow the markets to spread out a bit more, especially during Covid, thus allowing visitors to feel a little safer when coming into the town to shop.  I had a good response from those  in the market place, galleries, eateries, plus shops in Duke Street, Bell Street and beyond.  And of course there were reservations from some about traffic and the worry that this would put off potential customers.

But to be clear, this was only going to ever be a trial – to TEST our assumptions, for the better or worse. To my mind… if it went well ….  it was only ever going to be a road closure for one day a month.  Perhaps twice in the summer.  This was never going to be permanent.

Having researched other towns similar to Henley who had temporarily closed roads to help springboard the traders…. the feedback was positive.

As restrictions were slowly lifted the idea was to still trial the road closure.  We wanted to introduce different markets into the town, vintage clothing, vinyl and more local.  Markets that would attract visitors to the town.  There was never any suggestion of introducing new food stalls, why would we, we have sufficient fabulous  local restaurants in the Town already.   And those visitors would shop in Henley, would have lunch.

And  If not markets then during the summer have more tables and chairs in the market place for the restaurants and pubs, music, a safe area for families and children to take stock, have a glass of wine or a meal, before shopping.

And of course, a safe passage through for the emergency vehicles as we do with all our Market Place events.  Emergency services are always contacted before any road closure.  It would be a bit foolish if we didn’t.

Unfortunately the coverage of the issue was misleading. Permanent pedestrianisation has never ever been my or anybody else’s intention – I live here too! I want our town to flourish!

For me, the genesis of the idea was around helping Henley thrive, being on the side of the traders, improving the environment, increasing footfall.

I would like to thank all those who supported this proposed trial, those who messaged me in 2020 who saw the vision I had in mind for the town and again to those who have messaged me recently.

A less optimistic person could feel disheartened by some of the comments on social media about this – me suggesting an idea, is not ‘crazy, or mad’… It’s how progress is made, it is how we move with the times, thrash out views, respectfully disagree and drive the town forward – That’s what makes Henley so special.

I have been taken aback by some of the discourse about this.

There will be a significant amount of people who will be disappointed, including many shops in and around the town.   But after much deliberation I have made the decision that this item should be deferred until the time is right.  I do still think we can do this, and it will work for Henley and for all the traders.  I think we can make Henley more than just a regatta town.

The vision of a buzzing lively marketplace, free of cars, fumes, will have to be put on hold.  .

I would like to thank people for responding either way – I do understand this is a very sensitive issue.  I ask people not to rule it out.”

As Sarah said there were retailers and residents both for and against.  Two retailers who were particularly against the idea were Barry from Gabriel Machin the butchers and Laurence Norris from Laurence Menswear in Duke Street.  On hearing the decision, Laurence commented, “Common sense prevails.”

Communing With the Campbells – Arriving in the US
Scroll to top