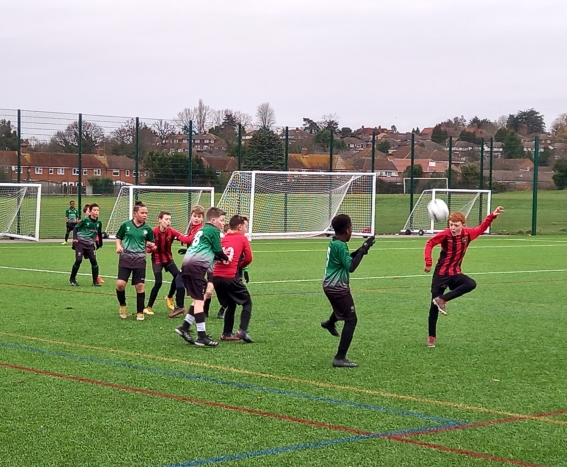 AFC Henley Hurricanes U11s continued their acclimatisation in the top division with a short trip across Reading to play Eldon Celtic Panthers.

Another wintry morning saw the AFC Henley Hurricanes and their small but vocal support on the road again. This week’s hosts were Eldon Celtic, using their smart 3G artificial pitch.

The game became more open, with both sides looking to create opportunities. The Panthers prowled for a goal. Shiva made a superb tackle to dispossess a striker, and moments later showed great foresight to intercept a pass. Jack T, Dominic and Will G all made important tackles. A Panthers ball across the face of goal led to an anxious moment, but there was no striker to convert the chance.

The Hurricanes had their own chances. Will G’s long shot was parried by the Panthers’ keeper, and Oscar’s follow-up just over the crossbar. Luca poked Dominic’s through-ball just wide. Nicholas was still winning the ball and finding passes in the midfield. Following some accurate passing, Oscar’s powerful shot hit the bar.

Towards the end of the first half, the momentum shifted and the Panthers had the upper hand. Goalkeeper Harrison saved a curling free kick, and shortly after another long range shot. A dangerous break caught the Hurricanes unawares, but the shot which came was off target. Another Panthers corner led to a goalmouth melee, but the ball was eventually cleared. The half ended with the Panthers on the attack again, but powering a long shot well over the bar and out of the ground.

During the interval the anticipated rain arrived. The Hurricanes had the best of the opening exchanges, having most of the possession but unable to create goalscoring opportunities. However, the Panthers were hungry and came back into the game. Two more crosses over the face of the goal went unanswered, and a free kick hit the post. Zico and Dominic made important tackles and Harrison another save.

A powerful Panthers strike from well outside the box was on target to break the deadlock. The Hurricanes had an immediate answer. Some tenacious passing up the left wing and a sharp pass found Jack C with enough time and space to stroke the ball past the Panthers’ keeper.

Despite the hail that was falling, the game came to life with both teams pushing for the advantage. Man-of-the-match Nicholas was still working hard in midfield. Another accurate corner from Jack C caused some problems, whilst the Panthers produced some powerful strikes, one of which skimmed the bar.

The game ended with some cold, wet and tired players who had not stopped trying despite the conditions. They have a well-earned rest next week!