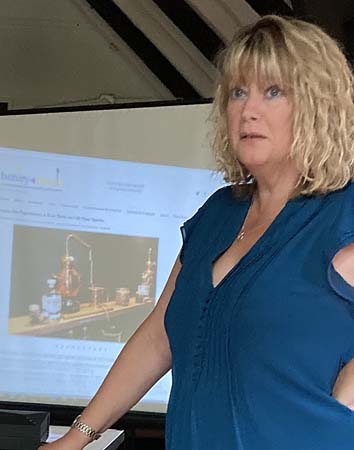 We gathered on a warm and sunny day to listen to our Speaker, Michaela Clarke, who is the founder and editor of the popular online newspaper ‘The Henley Herald’.

A Henley resident and leader of the Henley Brownies for 15 years, she had previously worked in marketing but was looking for positive new project. She developed a ‘very little nugget of an idea…’ into an on-line Newspaper dedicated to Henley. Not an easy birth, originally it was called the hush-hush project, but on 13 January 2013 the first edition appeared.

An on-line newspaper is very flexible, and is able to adapt swiftly to events, both local and national, although she emphasised that there is always a concentration on Henley news. The content is updated throughout the day, varying from day to day and she aims at a daily 4 – 5 stories, 3 main stories, and articles covering the council, schools, churches and, of course, Women’s Institutes. There is a weekly cartoon, drawn by Steve Allender, interviews, photos, local restaurants…. she prides herself on covering everything which goes on in Henley, whether tiny or very large.

This is a newspaper very involved in the local community, with the help of local firms such as Brakspears, ManningUK, Invesco, Simmons & Sons, Southern Plant, Relais Henley and THP Solicitors. In addition, she has raised funds for laptops for children in local schools and recently, she has changed the coloured logo of the HH into the colours of the Ukrainian flag. Her early motto was ‘from little acorns mighty oaks will grow’ and certainly her beloved Henley Herald is growing.