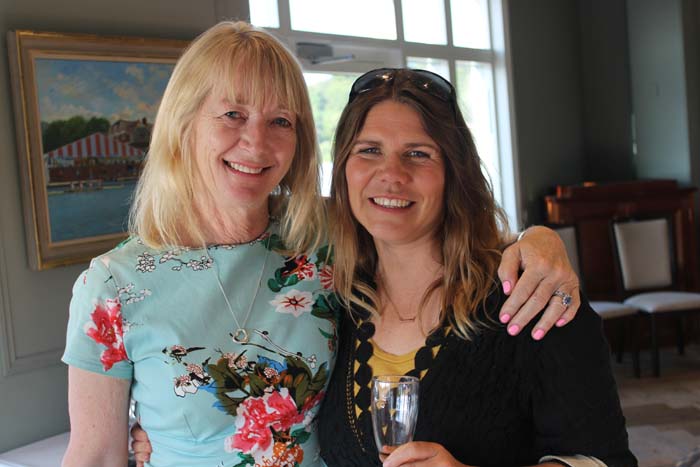 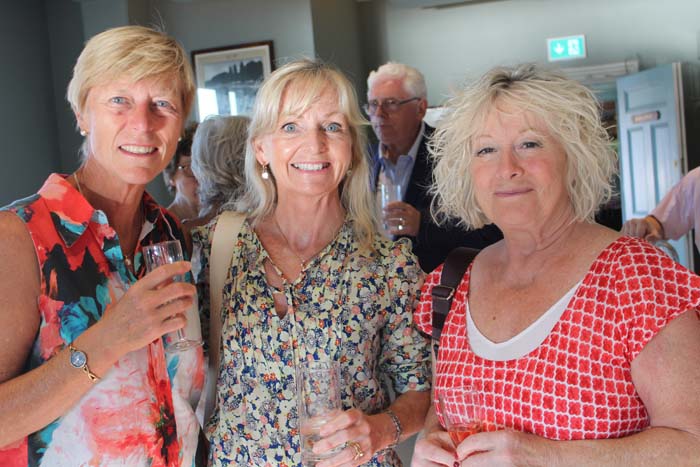 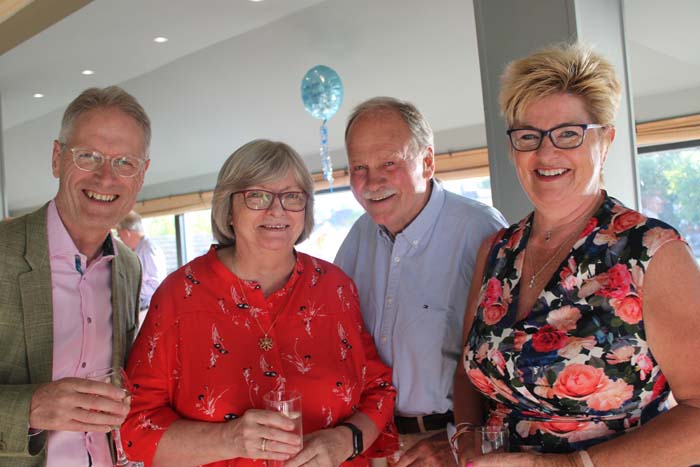 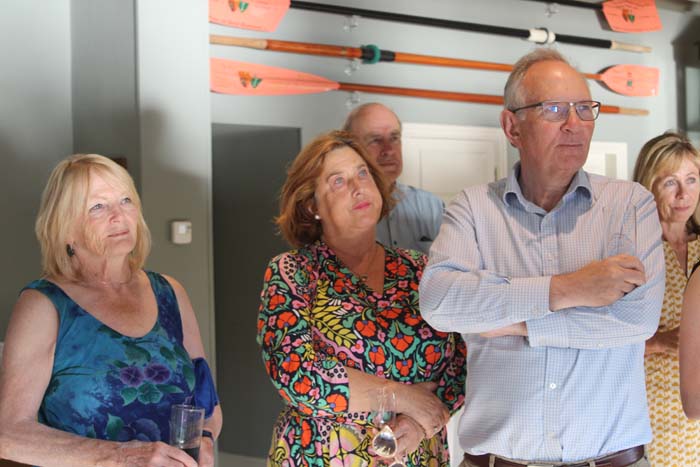 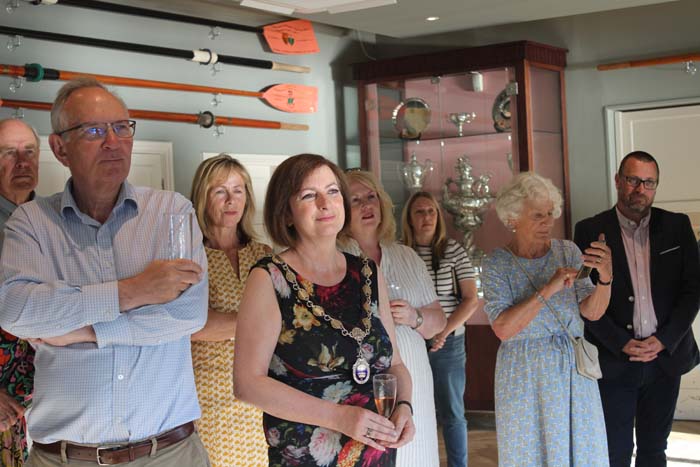 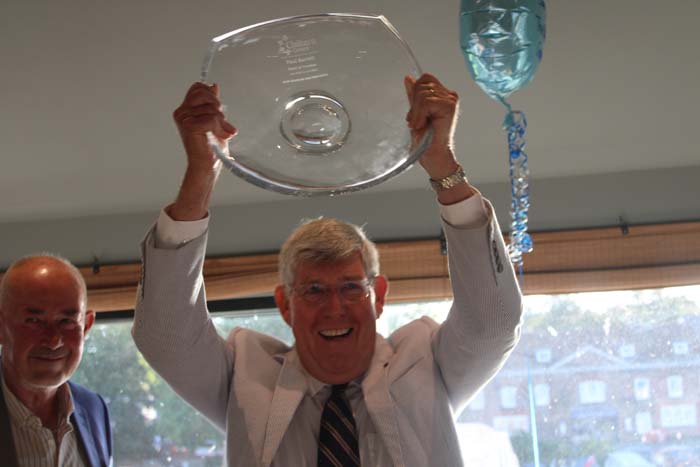 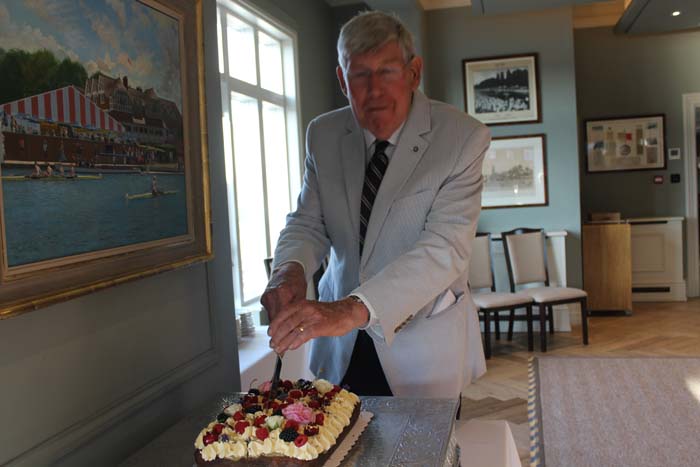 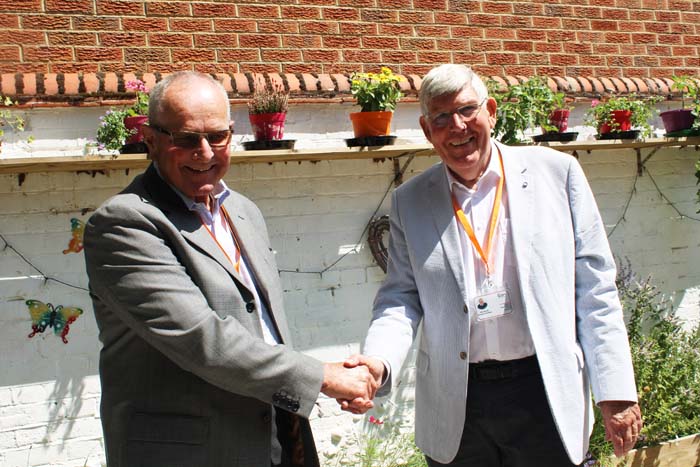 Chair of the Board of Trustees at The Chiltern Centre, Paul Barrett has retired from the position after 19 years with the charity, who organised a party for him at Leander Club last Thursday evening.

Trustee Dave Haddock spoke about Paul, saying, “I first met Paul in July 2017 when he came to my Captain’s golf day and he did one of the things he does best. He smooched the members and talked in glowing terms about The Chiltern Centre. What can I say about Paul Barrett? Is it is suave sophistication, his youthful good looks, enthusiasm, exuberance not to mention a good sense of humour which has been needed over the last few years. No I don’t think that’s enough words to describe Paul. Let’s start with the 3 words he describes himself – fortunate, optimistic and charitable. Fortunate – we are fortunate to have had Paul steering the ship for all these years. He would think he is fortunate because of his lovely wife Mary, 2 children and 5 grandchildren. Optimistic – from my own experience I am sure all fellow past and present trustees would agree that he always sees a positive way forward from a difficult situation. Charitable – what can I can? I rest my case on that word.”
Dave spoke of the challenges Paul has faced as Chair. Opening the doors of the Centre in February 2004 with a very uncertain future, purchasing the freehold of the site in 2005, avoiding bankruptcy in 2010, building in a new wing in 2011, moving from Ofsted to CQC in 2019, sowing the seeds for a move to new premises and not forgetting getting through the global pandemic over the last 2 years.

Dave added, “Thanks to commitment and drive of one person, we have changed, grown and developed into something that everyone should be proud of. Paul we cannot say how we appreciate you so we don’t want to let you go totally. Tomorrow we will vote on a proposal at the AGM to make you an Honorary President of The Chiltern Centre.” This was of course voted through unanimously!

Afterwards Paul thanked his fellow trustees past and present, the staff, the many people who have raised money over the years and the local community for supporting the charity. He said, “If it hadn’t been for those early foundations, we wouldn’t be here today. When Oxfordshire County Council shut the doors of the then Chiltern Resource Centre we had nowhere to go. It was only because of individuals who got together and made this happen. It just shows how important people are and the old adage of people don’t just do nothing but act and thanks to Bill Patterson who started a petition to try and stop the closure and to Ivor and Jan Sumner who helped write the business plan to prove to OCC that we were serious and we could make this a start up and a going concern. Over the 19 years we have had hundreds of children and young people whose lives have been enhanced by the ability to come to the Chiltern Centre and for that I am truly grateful. I know that will carry on because there is nothing more important than our objective of giving short break, respite care, to parents and carers who are desperate and in real need for break and at the same time trying to make their offspring have the best lives they can in our care. I know Ivor (new Chair) and the Board will carry on doing their best to make sure this is fulfilled but all I can say in ending is that it has been an absolute pleasure and privilege to work with all these lovely people and what more can you ask in life to do something worthwhile with people who are so congenial themselves.”

Ivor Lloyd, former Leander Club Chair and Director of Rowing and Managing Director of Dorney Lake will be Paul’s successor. At the AGM Paul said, “I’m delighted that we have found some of his calibre to take over. I’ve said to Ivor that he needs to be good at thanking people and we can’t take nothing for granted.”

Paul was presented with a large glass bowl which he raised in the air saying it was like winning Wimbledon which was engraved along with a photo book of pictures from the last 19 years. 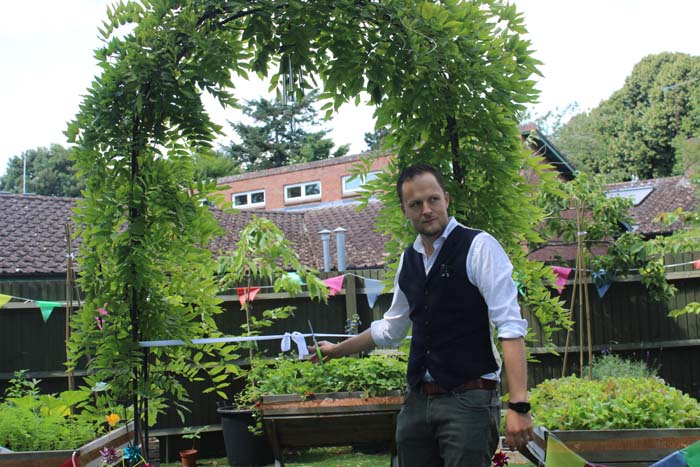 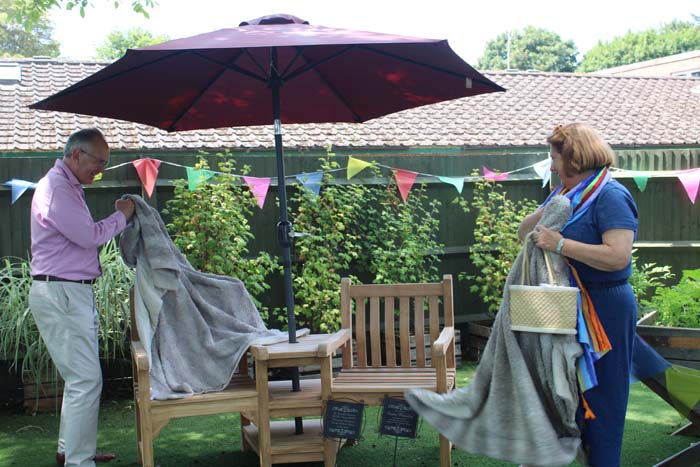 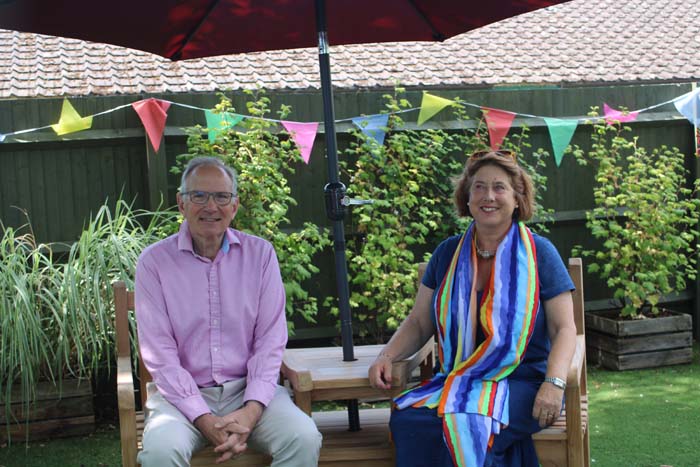 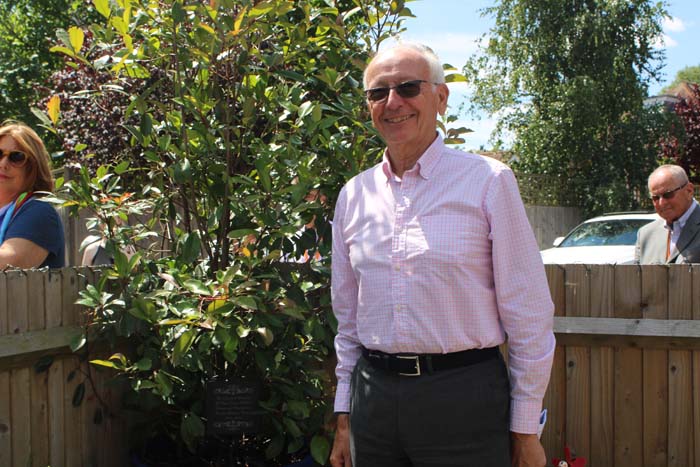 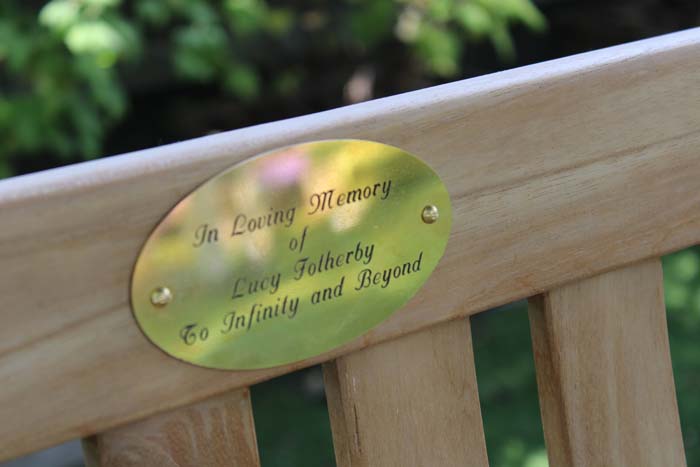 Patron Alex Haigh officially opened the accessible and sensory garden at The Chiltern Centre on Friday after the AGM. He said, “I remember planting a tree in the garden with my Mum. I love gardens and during the pandemic being outside was my lifeline. He thanked The Mozawi Foundation, Toad Hall and South Oxfordshire District Council and others who have donated towards the garden makeover and to Jane, Ester and Victoria from The Flower Union who created and designed the garden.

Afterwards two trees were unveiled in memory Simon Priestley whose friends and family raised a lot of money for The Chiltern Centre and to Jane Waites who was a former Patron of the Centre who sadly passed away in August 2020. Paul Barrett, “Jane was a very special person who was a Patron of the centre for a very long time and during that time she allowed us to use the lovely home that Jimmy her husband and she shared in Shiplake where we had a number of memorable events and she was always very solicitous in introducing me to fundraisers who she was in contact with. She was an amazing, generous lady with huge contacts. As a long serving Patron and benefactor of her will, we would like to honour her.

Parents of Lucy Fotherby who was a regular visitor at the Centre unveiled a garden bench in her memory. She passed away in February 2021. Her father Nigel said, “Lucy was a visitor at the centre for many years and had very many happy memories thanks to the staff and the terrific support she received. Respite helped our family enormously as well. We are very grateful for this very happy memory and all the care that she received.” The bench has a plaque on which has Lucy’s favourite saying on from Toy Story, “To infinity and beyond.” 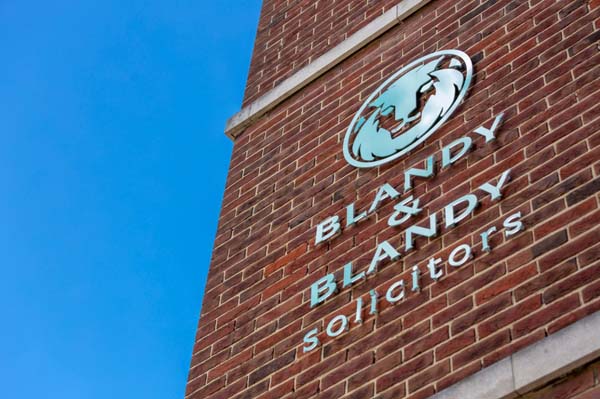 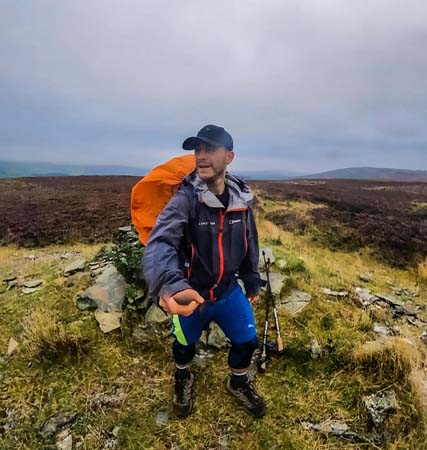 Marco Completes Longest Ascent from Henley to Top of Snowdon 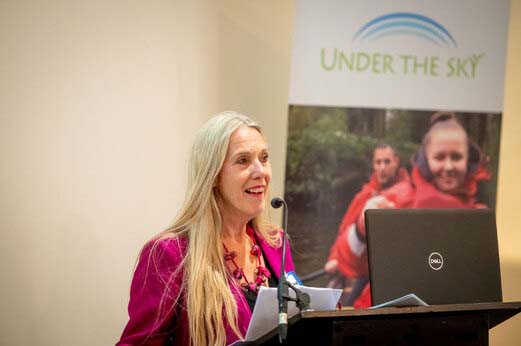 New Networking Group for Women in aid of Chiltern Centre 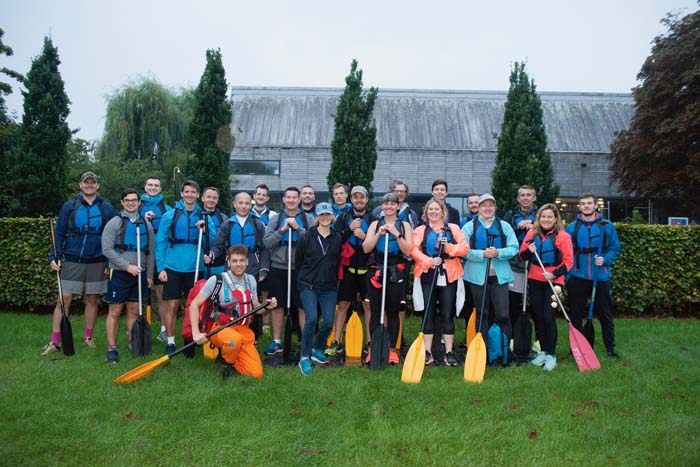 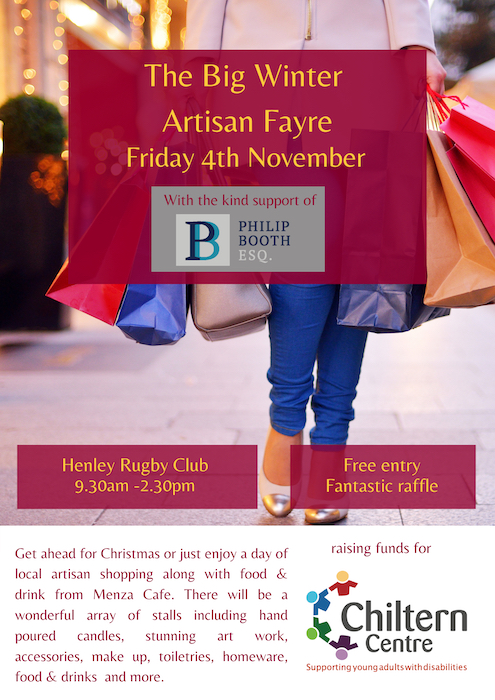 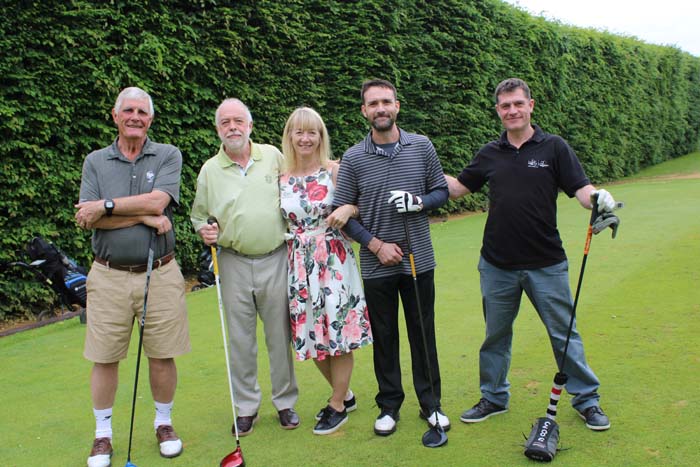