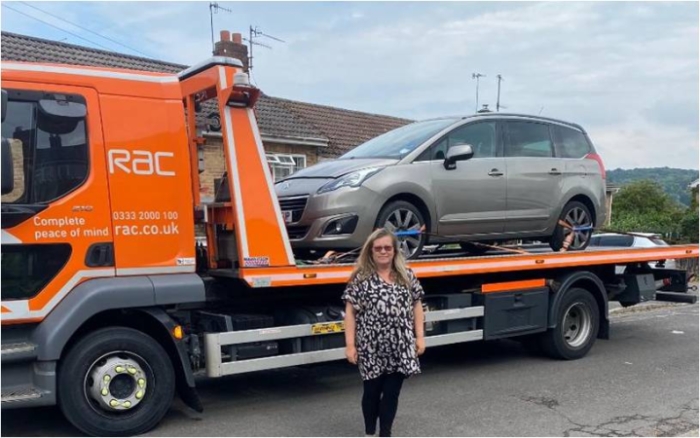 Caroline Jacob and her son Ewan were stranded overnight on Friday night after their car broke down whilst they were travelling back from a camping trip in Wales. The warning lights on their Peugeot came on at junction 36, Sarn Park on the M4 at 1230 and Caroline called her recovery firm, the RAC.

She received a text from the RAC to say that there was a 270 mins (4½ hours) approximate wait so she then called the police to get the car taken off the live slipway lane. Caroline then received multiple texts informing her that RAC was extremely busy and that assistance would be coming but the time delay got progressively later and later.

At 2100, eight and half hours after the original call, a pick-up truck from a RAC approved partner garaged turned up but were only prepared to take Caroline, Ewan and the car to Magor Services 37 miles away at junction 23A nearest to the bridge. Caroline’s husband Kevin who was trying to help said, “They were only taken to the closest services to the Severn Bridge as the local guy who the RAC found couldn’t go over into England.”

On route to Magor services Caroline received a text message saying the next recovery truck would be with her in 180 mins for around 12.15am. She then started receiving texts saying “Sorry if you’re still waiting we’ll be with you as soon as possible.”

At 0245 on Saturday morning, Caroline was taken to Seven View services with no further information about when she would be moved again. At 04;11 she received a text saying We should be with you in 45 minutes. With that Caroline called and asked for a taxi to take them home as they could not guarantee where the next recovery vehicle would be able to drop them. Caroline said, “Luckily I was able to charge my phone at the closed Burger King at the service station so that I could make and receive calls.” The taxi finally arrived at 0530 and Caroline and Ewan finally got home after 7am – 18 ½ hours after they broke down.

The family are due to go away on a family break today (Wednesday) and the car was only just returned yesterday afternoon. The RAC have offered £350 towards repair and car rental until next Monday.

Caroline said “It has been so stressful and I’m so glad it’s over now with the car having been delivered back to Henley. I truly hope no else has to go through an experience like this.”

In a statement, the RAC said: “While we usually fix most members there and then, on this occasion a recovery was the only option.”Unfortunately, long recoveries are currently very challenging for the whole industry due to regulations limiting how long drivers can drive for and a shortage of drivers.”We’re really sorry Caroline and her son didn’t experience our normal high level of service.”