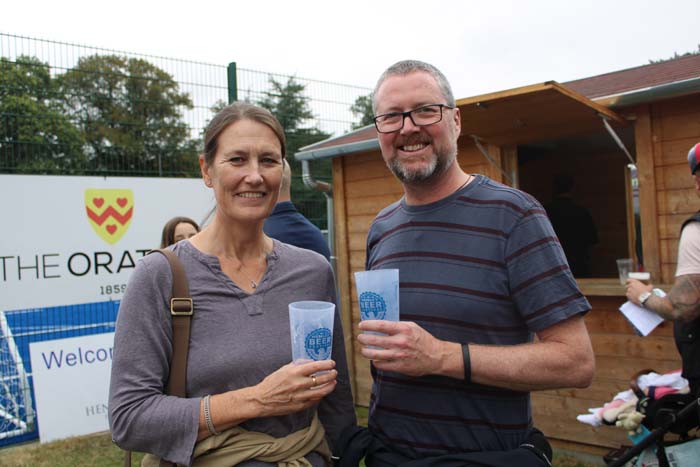 Henley Hawks have another home game on Saturday which sees them entertain table topping Barnes RFC at Dry Leas in their latest National 2 (East) fixture. Kick off is 3.00pm.

Saturday promises to be a busy day for Henley RFC, as throughout the afternoon, the club is also hosting the Henley Beer Festival, sponsored by Loddon Brewery. The Henley Bulls (2nd XV) and Henley Vikings (3rd XV) also have home games so it will be a bumper afternoon for rugby fans.

The Hawks will be buoyant having picked up two successive wins and will be hoping to continue to build some momentum against Barnes this weekend. Although it is still early days, the Hawks are fifth in the league but only two points behind the leaders. In fact three points separate the top nine sides so there is all to play for.

Henley forwards are beginning to show some punch now. The scrum is certainly looking strong, led by skipper Dave Manning who put in an excellent performance against Guernsey. Tom Vooght  and Sam Lunnon are dominating the loose play and giving the side plenty of attacking opportunities.

Head coach Luke Allen has managed to keep an unchanged pack of forwards for the fourth game running. In the backs, Ryan Crowley keeps his place at full back after a good performance last week. Wing Reuben Norville and scrum half Ewan Fenley return to the side after being unavailable against Guernsey. James Davies comes into the centre in place of Guy Rawsthorn. Leo Webb returns to the bench and is joined by Morgan Macrae and Zac Taylor.

Barnes come to Dry Leas as the surprise league leaders of National 2(East), despite slipping up at home last week to Dorking 26-25. They started the season superbly with a home win against fancied Worthing (34-21) and then went to the Channel Islands and beat Guernsey (32-17). Over the past few seasons, they have consolidated themselves into a tough National 2 outfit and last season they finished 11th. In the two games against the Hawks last season, the game in West London was drawn 17-17 while Barnes won at Dry Leas towards the end of the season 34-19.

Elsewhere in the league, Canterbury and Tonbridge Juddian are second and third after wins against Westcliff and Bury St Edmunds respectively. Blackheath are fourth after a 65-5 win over Rochford Hundred and they also have a game in hand. Old Albanian won at North Walsham while Worthing Raiders got their first win of the season against Sevenoaks 32-27.

Both the Bulls and Vikings are also at home on Saturday.