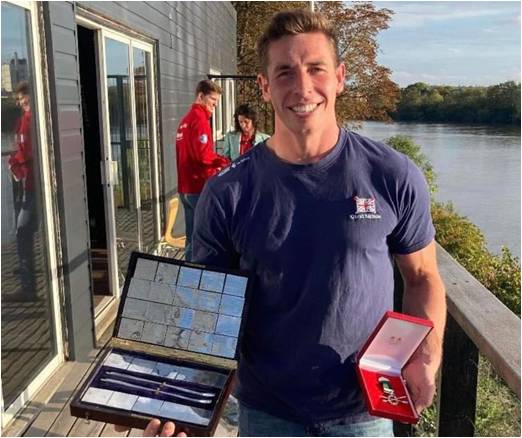 This is an event that is steeped in history, dating back to its first race in 1830, with many famous winners in British sculling folklore including Olympic champions such as Greg Searle, and Sir Steve Redgrave.

Seb lined up against the best of club rowing in the UK. Deveraux showed what great form he was in to lead from the very start, extending to a large margin by the milepost. The Tideway conditions didn’t disappoint with rough and windy conditions that never allowed Deveraux to feel comfortable. Battling to keep opening up his lead, Deveraux won in wonderful style to take the overall Men’s Wingfield Sculls 2022.

On the day’s racing Deveraux commented: “I’ve rowed on the Tideway before, never in a side-by-side race. There’s always that added element of beating your fellow man. It’s a race I’ve had my eye on for a while. I’m over the moon. Tough conditions and tough opponents meant that despite taking the lead early I never felt comfortable. I’m really pleased to come away with the win and couldn’t have done it without the support from Leander Club. Also a big thanks to Mark Chatwin and Imperial for hosting us over the past few days.”

In the Men’s race, Sebastian Devereux of Leander Club became the latest sculler to add his name to the history books. The Men’s race has been running since 1830 and previous winners

Two scullers withdrew prior to racing. Devereux’s brother and clubmate, Miles and London Rowing Club’s Rui Xu, who won both Scullers’ Head and Pairs Head earlier this year. Luke Reiser of Twickenham Rowing Club was able to hold onto second place after a mighty sprint came from former U23 Lightweight World Champion, Matthew Curtis who relegated Jamie Gare from the University of Bath to fourth place.

In the Women’s event, reigning World Champion, Imogen Grant won in a controversial showdown.  Following a conservative start, Grant began to move through the field of six scullers, attacking on the Surrey side. Her progress was quickly halted by race leader, Katie Mole of the University of Birmingham who she collided with.  Both scullers stopped dead in their tracks and had to untangle themselves.  Their crash also impacted Georgie Robinson-Ranger from Henley rowing for the University of London. Racing on home water, the U23 World silver medallist narrowly avoided damaging her boat and rear ending her opponents.  Grant recovered well and by Hammersmith Bridge she was back in the leading pack.  As the race entered the final stages after Barnes Bridge, Robinson-Ranger mounted a late charge, overhauling Twickenham Rowing Club’s Jade Lindo. However, there was too much ground to make up on Leander Club’s Imogen Magner and Becky Wilde.  Robinson-Ranger protested the result arguing that she was impeded during the crash, but Umpire, Graeme Mulcahy, 1976 Wingfield Champion, upheld the verdict.

Speaking after the event, Sam Meijer, 2019 Champion and new Secretary said: “It is a huge honour to take over the running of the race from Wade Hall-Craggs, who has run the race for 25 years. Today we had two incredibly exciting races, which showed some of the best of British sculling and we have two new champions to show for it.”