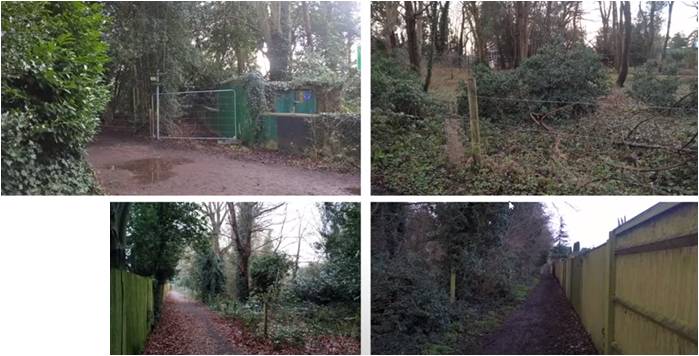 Gillotts School’s planning application to erect a 2.4m perimeter fence for security reasons has been refused by South Oxfordshire planning committee this week despite the Planning Officer recommending it should be approved.

The Department for Education (DfE) recommends that schools should be fenced with a secure fence or railings over 2.0 m high.  The erection of a two metre high fence along the perimeter of the site would fall within permitted development rights and would not require planning permission from the local planning authority. Due to the additional 40cm in height planning permission is required.

Henley Town Council recommended refusal stating “The Committee unanimously recommended refusal on the grounds of visual impact on the character of the area, the effect on local wildlife and proximity of the fence to the footpath (bridleway that runs behind Makins Road).”

34 residents who back on to the bridleway objected stating that the proposal would have a negative visual impact on the character of the area and detrimental effect on the existing trees, local wildlife.

In January of 2022 the SODC’s ecologist raised a holding objection noting “the proposed fencing would likely require concrete foundations to be built adjacent and through areas of woodland, some of which is subject to a TPO. The proposed works have the potential to damage tree roots and impact the woodland habitat. There are records of badger in the locality too, which if present in the woodland could be adversely impacted by the works. I recommend that proposal be supported by a preliminary ecological appraisal, to determine if the proposed works would have any adverse impacts on priority habitats or protected species.”

An ecological appraisal was submitted in September 2022. On review of this document the council’s ecologist raised no objections to the proposed scheme subject to the suggested conditions commenting “surveys have concluded that impacts on protected species and unlikely that that impacts on the woodland habitat can be mitigated with sensitive working methods and mammal access gaps to preserve connectivity for species using areas of woodland. Small scale tree works may be required, but the removal of large trees is not proposed. In light of this I am satisfied that the development proposed can be implemented at the site without harm to any protected species and / or their habitats.”

In the Planning Officers report it states, “I do not consider the fences would form an overbearing element along the shared boundary and am satisfied that the proposed development would not result in any harm to the amenity of the neighbouring properties in terms of light, outlook or privacy.” It concluded, “The proposal complies with the relevant Development Plan policies and, subject to the attached conditions, the proposed development would be acceptable in terms of its relationship to the character of the existing site, setting of the Chilterns AONB or the wider surrounding countryside at the edge of the settlement. It is also acceptable in terms of impact on residential amenity, the existing landscape features, protected trees, species and their habitats.”

Former Gillotts teacher, Town and SODC Councillor, Stefan Gawrysiak tabled a motion to refuse the application at the meeting describing the fence as a “prison fence” saying “The fence would block views and access to the woodland. This green space has been allocated in our revised neighbourhood plan and it should be protected.  I think the school can come up with a better solution by moving the fence on to the playing fields.”

The decision notices states, “The school grounds are highly visible from the adjoining Henley-on-Thames Footpath 21 and Henley-on-Thames Bridleway 20, which lie immediately north of the site. Due to the height, scale and appearance of the fences proposed the development would form an incongruous and prominent feature along the public rights of way, which would obstruct views into and across the designated Gillotts Wood Area of Protected Open Green Space and detract from the existing green and open character of the footpath and bridle way. The development would result in an unacceptable level of harm to the character of the existing footpath and bridleway and to the wider character of the surrounding area.”

Gillotts Headteacher, Catharine Darnton on hearing the result said, “We are very disappointed by the decision of the planning committee to refuse our application. We had worked closely with the planning officer and she had concluded that our proposal complied with the relevant development plan priorities and that it was acceptable against all relevant criteria, including impact on the character of the site, protected trees, species and habitats.  There is no more important responsibility for us than to keep our students and staff safe and for further challenges to be placed in the way of our improving the security of our site is highly regrettable.  We will now take some time to consider our next steps.”