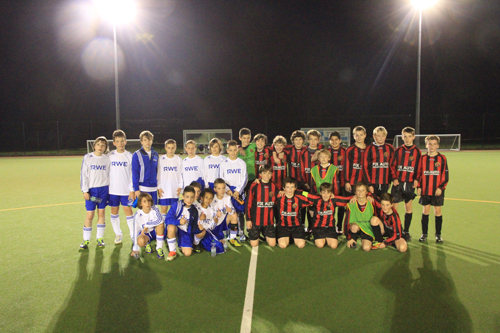 AFC Henley was one of the first Henley groups to establish a sporting twinning link with Leichlingen over 30 years ago and exchanges have taken place annually ever since. This year was no exception, when a group of U13s and parents from SC Leichlingen arrived during the October Half Term break as guests of the club.

This year the two U13 teams met on the Friday evening on Jubilee Park’s new RhinoTurf to compete for the Dukes Shield (see separate match report). Henley ran out easy winners, mainly because the Leichlingen players have not yet moved up to 11-a-side from 9-a-side and smaller pitches. However, in a 6-a-side tournament the following morning, with the limited playing area more to their liking, SC Leichlingen exacted their revenge and carried off the Friendship Shield.

On the Saturday afternoon, at the invitation of Group Events at Reading Football Club, the young German and Henley players visited the Madejski Stadium, making an appearance on the pitch in front of the home crowd during the game against Millwall. Hendrik Scheler, the young SC Leichlingen coach, said they all thought the trip to the match was fantastic, especially being able to get so close to the pitch and the players, and that they would be “going home with 12 new Reading fans”.

Henley’s Mayor, Stefan Gawrysiak and Carol Crowdy, representing Henley-Leichlingen Twinning Association (HLTA), attended the big match on the Friday evening and a reception at The Triangle Ground, Mill Lane, after the game. A farewell party was held on the Saturday evening at Henley Cricket Club, attended by Henley’s Deputy mayor, Cllr Martin Akehurst and, again, representatives of the HLTA

Next Easter it will be AFC Henley’s U13s’ turn to travel to Leichlingen to take part in the annual Osterturnier (Easter Tournament), which attracts teams from a very wide area, and to compete separately with SC Leichlingen for the Goossens Trophy.

Dieter Hinke, Chairman of AFC Henley said: “It was great to see teenagers from both towns not only competing on the pitch but cementing relationships off the pitch. A number of Henley families are now sold on the concept of ‘twinning’ and plan to get more involved with the twinning association’s wider twinning activities.”

Henley-Leichlingen Twinning Association (HLTA)
The Henley-Leichlingen Twinning Association was founded in 1979 with the aim of fostering friendship and understanding between the people of Henley and those of Leichlingen, a small town situated on the River Wupper in the Rhineland. Regular group exchange visits are arranged and other visits, especially by young people, are encouraged so as to broaden the understanding of the sporting, musical, educational and commercial activities of the two communities. Visitors in both directions usually stay with families in the town and many firm friendships have developed as a result. Knowledge of the German language is not essential, although it can make visits more rewarding and enjoyable.

AFC Henley
AFC Henley, founded in 1974, has over 300 members aged 4 -18. It runs a Mini-Soccer Centre for U5s – U8s, staffed by professional coaches, and has 19 teams from U9 – U18 in the East Berks Youth Football League. The club has access to three separate grounds plus the RhinoTurf at Jubilee Park. The club provides football for all ages and abilities by working with Henley YMCA under the ‘virtual’ community club banner ‘The Henley Football Partnership’. Child Protection is a key priority. We adhere to the FA’s Child Protection and Best Practice guidelines. Our volunteers are all CRB-checked and many have qualified at FA Levels 1, 2 and 3. Our guiding principles are to provide the best coaching for the youngest children, to teach them to play good football, where winning is not the overriding aim, and to implement all relevant FA grass-roots football policies and recommendations. In recognition of our efforts the Henley Football Partnership was voted Oxfordshire FA’s Charter Community Club of the Year in 2009 and 2012.

Hawks Not at the Races with Blaydon
Scroll to top