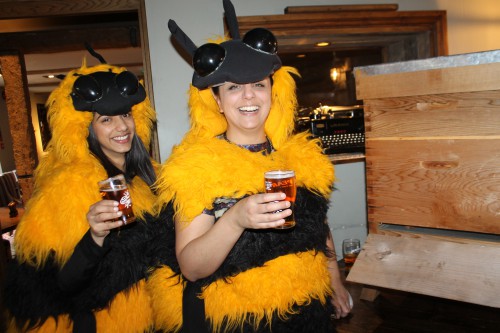 Sarminder and Wendy from Friend’s of Earth

Brewer and pub operator Brakspear is launching Honey Bee, a 4.4% ABV honey beer, brewed at its microbrewery in Henley during April and May in support of Friends of the Earth’s ‘Bee Cause’ campaign to protect the bee.

Honey Bee is a light, golden beer, created by Brakspear’s head brewer Malcolm Mayo at the Bell Street Brewery in Henley. The honey is from beehives at Orwells, the award-winning Brakspear pub at Shiplake near Henley, and 20p from every pint sold will be donated by Brakspear to Bee Cause.

Brakspear chief executive Tom Davies said, “We are very proud of Honey Bee and delighted to be continuing the partnership with Bee Cause that we started last year. Honey Bee is a great tasting beer, and we’re expecting to sell many pints and present Friends of the Earth with a sizeable donation after 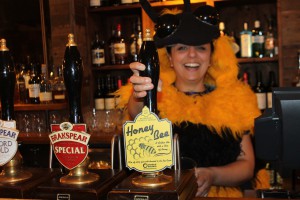 “Brewing a honey beer and supporting Bee Cause are naturals for Brakspear. Not only do we have a bee in our logo, but most of our pubs have gardens or outdoor floral displays that depend upon bees, which is why so many of them and their customers got behind the campaign last year.”

Last summer around 50 Brakspear pubs planted their gardens, patio tubs and window boxes with flowers and grasses which encourage bees to pollinate. These ‘Bee Worlds’ are listed on the Friends of the Earth’s website and many pubs are planning to replant them again this year.

Honey Bee will be available in draught format to Brakspear pubs only. It is brewed using Maris Otter and Crystal malts as well as malted oats, First Gold and Williamette hops. Malcolm Mayo said, “Honey Bee has delicate, subtle honey notes, with a bracing delivery of hops on the follow through. It’s been a pleasure to brew it using honey from a local Brakspear pub.”

Brakspear opened the Bell Street Brewery in May 2013 and brought Brakspear Special, a popular beer in Henley, back to the town. As well as Special as a permanent ale, the brewery produces a number of seasonal and ‘one off’ beers including ‘Blooming Marvellous’ in support of Henley in Bloom and ‘Two Bells’, commemorating the first ever Henley Club to Pub swim in summer 2014.