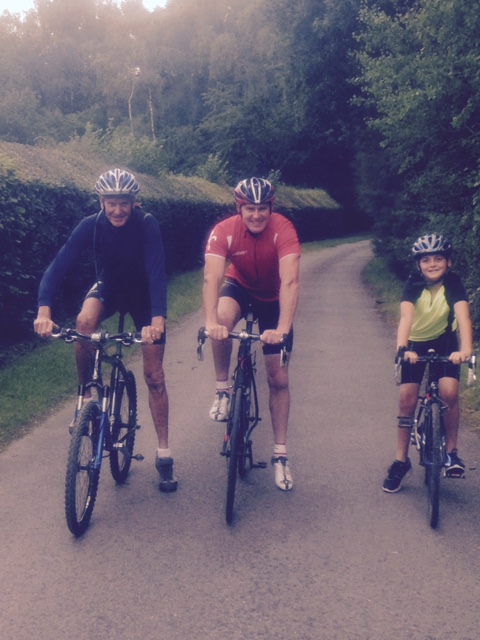 Three generations from a Henley family are cycling 25 miles as part of Sue Ryder Nettlebed Hospice’s Ride for Ryder challenge on Sunday 20 September.

Peter Bayfield (70), Joe Bayfield (42) and Eddie Bayfield (8) are all keen cyclists and wanted to raise money for the hospice. Peter says: “Our daughter Kate spent her last few days at Sue Ryder and this seemed like a good opportunity to remember her and raise money as well.”

Joe Bayfield used to be a professional cyclist, representing GB in events across Europe and the UK. He says: “I really enjoyed it and it was great getting to represent my country.” Eddie is following in his father’s footsteps. Joe says: “Eddie has been cycling since he was old enough to stand up pretty much. He used to go with us on dog walks on his balance bike and we would pull him along on the dog lead when he needed a bit of help. He’s just worked on from there.”

The family has been training hard, regularly cycling up to 20 miles together. Eddie, who attends Oratory Preparatory School, has raised almost £1,000 on his fundraising page. He says his school friends are surprised that he will be cycling 25 miles: “My friends kind of don’t believe me. They call me a pro-cyclist now as I’m always out on my bike.”

Peter’s wife Susan and Joe’s wife Katie will be out along the route cheering them on. The family are hoping that being local and knowing the route will give them an advantage on the day. Peter says: “We know the area pretty well; we know exactly which hills we’re going to have to walk up!”

Kate Bayfield was very active and did a lot of running and sailing. She loved an adventure and climbed the Via Ferrata in Italy with her brother Joe before being diagnosed with cancer. Kate was cared for at Sue Ryder Nettlebed Hospice before her death in 2014. Kate’s father, Peter, says: “We think Sue Ryder is fantastic. We’re very pleased with the way they looked after our daughter and us, and still are, and are happy to support them.”

Joe says that they will feel Kate’s presence during the ride, telling Eddie: “We know that Kate’s looking down, she’ll be very proud of you and she’ll certainly be cheering you on. She was a super Auntie.”

To sponsor the Bayfield family please go to www.justgiving.com/Eddies25forAuntieKate/