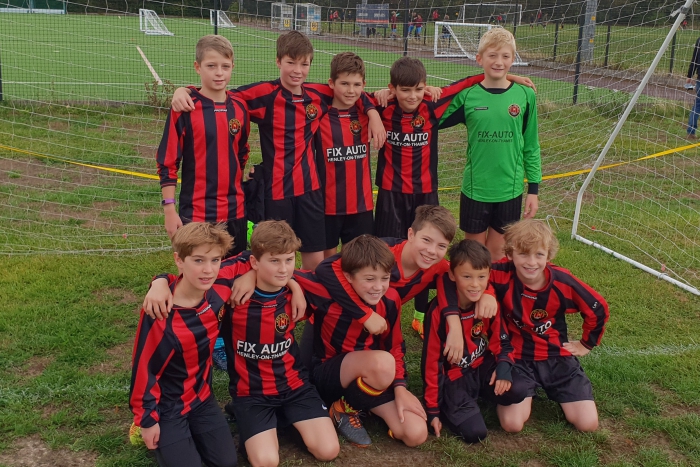 The U12 AFC Henley Hurricanes recorded the first victory of their East Berks Division 1 league campaign as they got their season back on track against the Finchampstead Marlins with a 3-2 victory at Jubilee Park.

However old habits die hard as the Hurricanes were soon 1 0 down as their customary lackadaisical start to games yet again made it hard for them to get a foot hold in the match.

Man of the match Ethan Holliday put in a match winning performance in the middle of the park however as he shielded the back 3 from the Marlins forward raids whilst launching the Hurricanes forward when the hosts had the ball.

It took 15 minutes for the Hurricanes to settle into the game but once they did they had the Marlins caught in a net. The ever-dangerous left winger Sam Robinson delivered a dangerous corner into the heart of the Marlins box and Sam Winters muscled his way onto the end of it as he powered a header home to draw the scores level.

Robinson now had his tail up and he was making the game look as easy as shooting fish in a barrel. Tom Yeoman was causing havoc up front and he slipped Robinson in on goal and he made no mistake with a clinical left foot finish into the far corner of the net as the Hurricanes went in to the half time interval 2-1 to the good.

In the home defence Luca Thomson, Tom Bonser and Daniel Tsoi were pillars of strength at the back as they kept the Marlins at bay with their strong tackling and brave defending.

However they were powerless to stop the Marlins equalising as the visitors scored on the counter attack to set up a tense finish. Tom Atkinson and Oliver Colvin were pushing down the right and left wings respectively and their tricky feet were creating chances for the hosts that they weren’t quite able to convert.

It was left to Joe Turner to sink the visitors as he released Yeoman down the middle with an exquisite through ball. There was no way Yeoman was going to let the Marlins off the hook as he slotted home with consummate ease to send the home crowd into raptures as the Hurricanes went into a 3-2 lead.

This lead was only kept intact by a simply stunning save by Ben Horner in the home goal as he leapt like a salmon to keep out a top corner bound shot to keep the Hurricanes in front and secure a first league win for his team.

Managers Turner and Atkinson were said to be relieved to get the victory and were now looking forward to getting on a good Cup run.

If any boy or girl in the Under 12 age group would like to play for AFC Henley then please come down to the astro turf at Jubilee Park (opposite Tescos) on Friday nights at 6.15pm or contact Trevor Howell whose details are on the AFC Henley website.