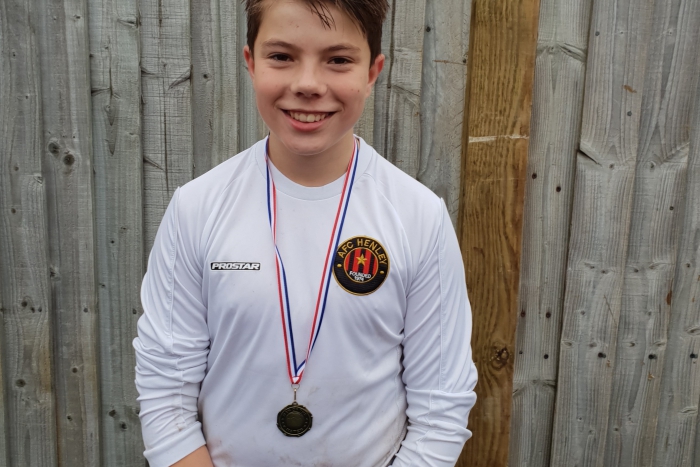 The U12 AFC Henley Hurricanes crashed out of the East Berks FA Cup as they lost 5-2 away to Bracknell Town.

On a wet morning in Bracknell the Hurricanes, kicking down hill, got off to an unusually bright start. Passing the ball around well flying left winger Oliver Colvin was the first to unpick the Bracknell backline as a good through ball was just about dealt with by the home defence.

Man of the Match Luca Thomson was having one of his best games for the Hurricanes putting his body on the line for the cause as he blocked and headed clear everything that came his way. Captain Olly Saunders was also having a great game as he organised the Hurricanes with his technical nous and know how. It was against the run of play however that Bracknell took a fortunate lead as a cross come shot flew in at the back post.

One quickly became two which was harsh on the visitors but as ever they fought back well. Tom Atkinson was hurtling down the right wing and was tripped on the edge of the box as he earnt the Hurricanes a free kick. Striker Finnbar Scott stepped up to the plate and rifled in a sweetly struck shot from 20 yards to make it 2-1 on the stroke of half time.

In the second half Joe Turner and Ethan Holliday were running the show in the middle of the park with their tough tackling and decisive through balls as they strove to find the equaliser for the visitors. Goalkeeper Ben Horner was also pulling off some fantastic saves and blocks as he kept the hosts at bay.  Again though Bracknell broke through and scored twice in quick succession to make it 4-1.

Tom Bonser was pushed up front to try and get the Hurricanes back in the game and this bore fruit immediately as he sent Scott away down the middle and he notched his second to make it 4-2. All hopes of a late rally were dashed however as the hosts scored immediately to make it 5-2 and give the score line a harsh look to it given the Hurricanes honest endeavours.

Managers Turner and Atkinson were said to be pleased by the performance and were now looking forward to focusing on the League campaign.

If any boy or girl in the Under 12 age group would like to play for AFC Henley then please come down to the astro turf at Jubilee Park (opposite Tesco) on Friday nights at 6.15pm or contact Trevor Howell whose details are on the AFC Henley website.