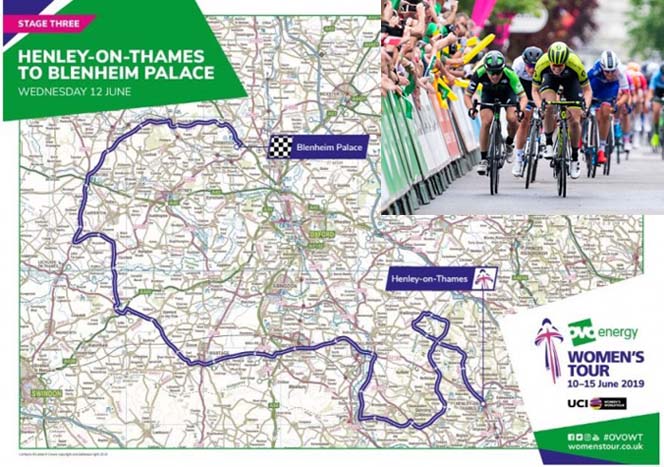 Henley will be the start location for stage three of the OVO Energy Women’s Tour professional cycling race on Wednesday 12 June from Market Place. Full details of the Oxfordshire route were revealed at a ceremony at Leander Club today (Monday 15 April).

There are plans for a Big Bike Breakfast on the morning of the race and it is expected that crowds will line the streets, cheering off participants on the 145 kilometre-leg that will finish outside Blenheim Palace in West Oxfordshire.

Oxfordshire’s county, city and district councils announced last month that a stage of the OVO Energy Women’s Tour, the UK’s most prestigious women’s cycle race, had been agreed to race through the county for the next three years, in partnership with event organisers SweetSpot Group.

From Henley, stage three will traverse the Chilterns via Pishill to Watlington, before returning via the climb of Britwell Hill to Sonning Common and Goring.

Crossing the River Thames at Wallingford, the route will pass through Didcot, Harwell and Wantage, crossing the Vale of White Horse to Faringdon, before looping through the West Oxfordshire towns of Burford, Charlbury and finally Woodstock in the closing kilometres.

Oxfordshire is expecting economic and health benefits from hosting the prestigious event, with cycling fans expected to visit the county to watch the race, generating additional business for restaurants, bars, hotels, B&Bs and shops.

In a comparable stage in last year’s race in Warwickshire, additional local expenditure linked directly to the event totalled £2m by around 100,000 spectators. Nearly two-thirds (63%) came from outside the county and 67% of spectators said they were inspired to cycle more often.

Starting in Henley, about 100 professional riders will weave their way through towns, villages and rural areas, inspiring local schools to organise themed sport and fitness lessons. Highlights of the race will also be screened on ITV4.

Mark Stone, Chief Executive of South Oxfordshire and the Vale of White Horse District Councils said: “This is wonderful news for residents and businesses in Henley and across our two districts – the economic benefits will be significant. It will hopefully inspire lots of people to take part in healthy activities like cycling, but just as importantly it is going to be a lot of fun. I’m looking forward to watching it.”

Janet Wheeler, Henley Town Council’s Town Clerk, said: “On behalf of the Mayor of Henley – and the Henley Town Councillors – we are delighted to host the start of this prestigious event. Henley loves a good party; and this looks like an event to inspire us all to leave the car behind and travel on two wheels!”

Thanks to title sponsor OVO Energy, the award-winning independent energy supplier, the event will once again back a prize fund equal to that of the men’s Tour of Britain for the second year running.

Commenting on the announcement, OVO Energy Women’s Tour Race Director Mick Bennett, said: “Oxfordshire is a historic and world-famous county; therefore, I am looking forward to the Tour visiting there over the coming years. To have our 2019 stage – the first ever to take place in Oxfordshire – start in Henley will provide the most incredible backdrop; and leave our world-class field with a truly unforgettable memory and reinforce the prestige of the event.”