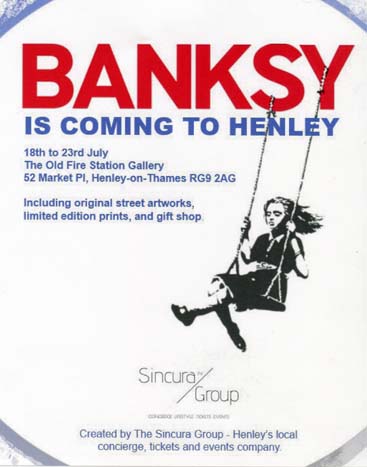 Original artworks from the world’s most famous street artists, Banksy, are coming to Henley for a pop-up gallery at The Old Fire Station Gallery from the 18-23 July.

Organised by local concierge The Sincura Group, it is your chance to get up close and personal with these unique pieces and also own your memorabilia from the show including books, mugs and gifts.

For those wishing to own their own Banksy, a limited edition print run of some of his most famous pieces has been created from vectored images of the original murals, the most accurate copies available on the market.

Street artist Bansky has been surprising the world since the Nineties. Over the past few decades, his stencils – with their recognisable style and often bearing searing political statements – have unexpectedly appeared in various cities across the globe.

Headed up by Christopher Wilson, the Sincura Arts team is regarding as the world’s leading expert of Banksy artworks. Since 2010 the company have been involved with 70% of all Banksy pieces appearing on the streets, from an advisory role with building owners and councils, to media and press engagements, to managing the safe removal and restoration of artwork and including the final sales and exhibitions. Christopher said, “Though often controversial, we ensure our work is both ethically and morally sound and our sales of these pieces have both benefited local charities and ensured the longevity of the artwork.”

The exhibition is free entry though cameras and photos will not be permitted inside.

The Henley Herald website provides an up-to-date and unbiased digital news service for
Henley-on-Thames
Finance Tips: All You Need to Know About Budgeting