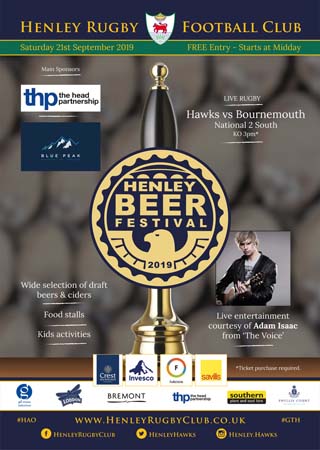 The Henley Beer Festival is back for the third year bigger and better than ever before this Saturday, 21 September at Henley Rugby Club. With the weather forecast looking good, come down and enjoy a pint or two in the sunshine and support your local rugby team.

Festival goers will be able to enjoy 27 beers and ciders – 17 from Oxfordshire and 10 from Dorset as well as musical entertainment provided by Matt Richardson’s band, Adam Isaacs from The Voice, Louis Rees, Bloc off The Wall and Blue Peak.  Plus there will be food outlets including The Menza Cafe and Knead Pizza.

The FREE to enter festival kicks off at 12 noon but the clubhouse will be open from 10.45am for the Rugby World Cup game between New Zealand and South Africa on the big screen.  The Hawks will be playing Bournemouth at 3pm (normal ticket prices apply).

The event is being sponsored by Loddon Brewery, The Head Partnership solicitors and Blue Peak accountants.

The programme for the live music is:

The full list of beers and ciders are listed below:

Brakspear (Henley) – Special (4.3%)
A truly classic English beer that’s golden red in colour with a well balanced aroma and a hint of sweetness.

Hook Norton (Hook Norton) –  Autumn Ways (4.2%)
The nights are drawing in so time to find the nearest fire and settle down with this warming ale.

Lovibonds (Henley) – Lucky Lager (4.2%) – KEG
Some noble hop aroma on the nose, this beer is fresh and clean with a touch of sweetness form the flaked maize and just enough bitterness to balance it out.

Tap Social Movement (Oxford) – Get Your Hops Off IPA  (5.1%)
Medium bitterness up front followed by massive hits of peach, passion fruit, and mango in both flavour and aroma.

Cerne abbas – Gurt Coconut Rum Stout (6.1%)
Its Gurt, its rum, its coconutty. Vic successfully conducted one of his experiments again with his old oak rum cask with no black sticky explosions this time!

8 Arch – Session IPA (3.8%)
Crisp and easy drinking session IPA hopped with a combination of US hops.