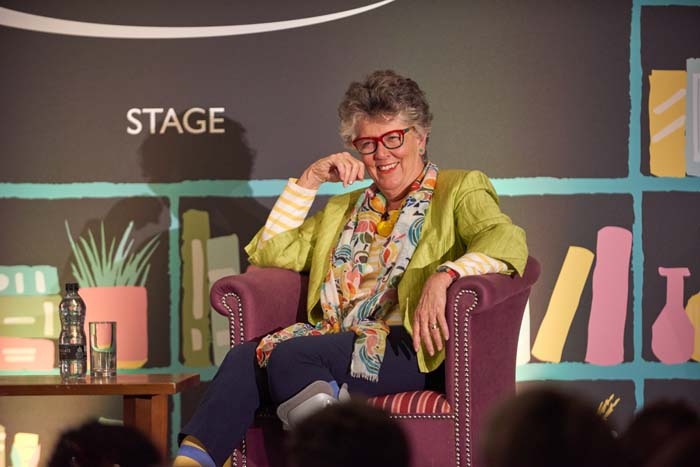 Great British Bake Off judge Prue Leith returned to the Henley Literary Festival stage on Friday evening to discuss her impressive life in food. The Lit Festival favourite was interviewed at Phyllis Court by Jessica Jonzen, sharing the twists and turns of her career alongside her view on diets, love, cooking accessibility, and her intentions for reforming NHS food.

Leith received a roaring round of applause as she strode onto stage, as much for climbing the steps in a walker boot as her sheer presence alone. Prue then went on to recount the details of her injury — a snapped achilles tendon — which doubled as a behind-the-scenes Bake Off story. This series began with a ‘Wizard of Oz’ inspired skit, where the four judges and presenters dressed as the four characters and merrily skipped down the yellow brick road (Prue joked on Friday that Paul Hollywood as the heartless Tin Man was the perfect casting). As the cowardly lion, Prue had to jump onto the road and roar at the others, although her growl quickly became a howl when her foot slipped and she snapped her achilles tendon. The GBBO medic, Danny, who usually only deals with cuts on fingers, was called to help; Prue quipped, “In five minutes he’d used his ambulance, his stretcher and his wheelchair — he was delighted!” In true showbiz spirit, Prue found her courage and managed to film the final shots — “I was so high I couldn’t feel anything,” she said — but spent the next 10 weeks in a wheelchair.

Prue took the Literary Festival audience along the path of her life, from chef to fiction writer to revered television star. The answers weren’t always so clear for Leith; having grown up in South Africa, Prue described how she had no idea what she wanted to do, and “was very interested in eating but not in cooking.” After a few failed attempts at finding a vocation, she moved to Paris, which she describes as a “transformative, wonderful” experience. “When I went to France it was like the scales falling from my eyes,” she said, “I fully realised how important food was.”

Having learnt her craft in France, Prue returned to the UK in 1960s and opened her first restaurant, Leith’s, aged 29. “I was just incredibly lucky because I’d never worked in a restaurant, and I just thought I know exactly what kind of restaurant I’d like to go to,” Prue stated at the Festival. “One of the reasons it did so well is that there weren’t any women running restaurants.” Prue also hypothesised that the success of her restaurant was down to her focus on fresh, simple ingredients, particularly vegetables, which she maintains in her cooking today; Leith’s most recent cookbook, ‘Prue’, centres timeless classics using familiar ingredients.

Speaking about her latest cookbook — her first in over two decades — the chef said, “The reason I called it Prue is because I wanted to be like Jamie or Nigel or Delia – people where you don’t need to know what their surnames are!” Despite the obvious expectation, the book is not full of baking, instead containing her favourite recipes that she has continued to make throughout her life. One such recipe is a traditional French apple pie, full of butter and other ‘naughty’ ingredients, of which Prue said, “It did cross my mind that I ought to change it, to modernise it, make it gluten free or something, but I then I thought, f*** it!” This comment inspired a conversation around calories, and Prue’s refreshingly relaxed attitude to them. “I don’t feel guilty if I eat something really indulgent that’s half my calories for the day because it’s worth it,” she explained. “I do think about calories but I don’t obsess about them. I just get so upset that so many young people are obsessed with diets and think there’s a silver bullet that will fix them and make them healthy.”

Healthy food is clearly of great importance to Prue, as she has recently been enlisted to help reform hospital meals provided by the NHS. Leith recalled at the Festival that she had been reluctant to get involved with the project, initially believing it a stunt to win votes. However, after being won over by the health and social care secretary, Matt Hancock, Prue joined a panel of NHS employees to tackle the problem of ‘inedible’ hospital food. “We’ve only had one full meeting so far and I was just so impressed because no one said it can’t be done,” Prue commented. “There are huge problems in the NHS but I think we can fix it.” Prue also shared the details of her recent breakfast meeting with Boris Johnson at Downing Street. She stated, “He’s absolutely accepted that it has to be long term and there has to be a lot of money. So I’m hopeful.” Of course, the funding for the project may well depend on what happens in government over the next few weeks, with the Prime Minister’s position looking increasingly insecure. “The only thing is,” Prue added optimistically, “whatever government comes in, how could they stand up and say we’re going to cancel anything going to the NHS.”

The evening took a heartfelt turn when the questioning moved on to Prue’s love life — specifically, to finding love again after her first husband, Rayne, passed away. “One of the things I really missed, one of the downsides of widowhood, is having no one to cook for. It’s a sort of daily present you give someone,” Prue divulged. “You get into a habit of being on your own which is really wonderfully selfish.” Prue’s second husband, John, was sitting in the audience, whom she gently told to cover his ears whilst she said,“The wonderful thing about someone you really love, is without that there’s nobody for whom you’re the most important person in the world.” Reflecting on her lot in life, Prue said,“I sort of think if Damocles came down today, I’d be fair cop, because I’ve had too much good luck. I’ve been really, really lucky.”