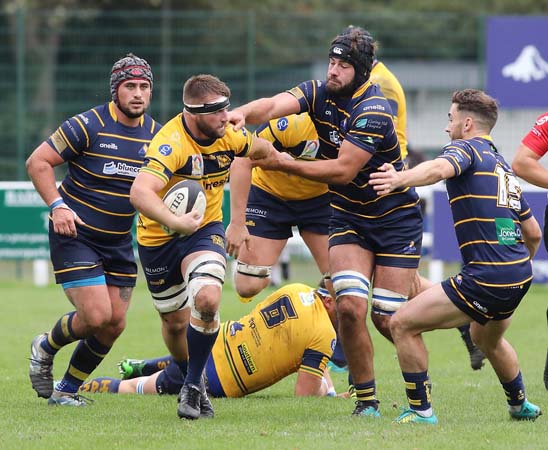 Henley Hawks are off on their travels again this week for their latest National 2 (South) fixture and make the journey to Sussex, to take on old rivals, Worthing Raiders. Kick off at the Roundstone Lane Ground in Angmering is 2pm.

The Hawks are now into a crucial period of the season and the next month could well define it. After the victory over Taunton, they now face two tricky away games, at Worthing tomorrow, and Redruth next Saturday before entertaining leaders Tonbridge in 1 February.

The Taunton victory keeps the Hawks within one point of the leaders, Tonbridge Juddians. The Hawks have widened the gap between themselves and third placed Taunton to seven points although the Titans helped themselves by picking up two bonus points with their late fight back. Tonbridge claimed a comfortable bonus point win against Bournemouth, 27-7. The form team in the league are Redruth, who the Hawks visit next week. Redruth have won their last six games and are now just five points behind Taunton. Last weekend, they thumped the Raiders 25-0 in Cornwall.

The main positives from the Taunton game was the form of No8 Alex Bradley, second row Dave Hyde and scrum half Ewan Fenley. The Hawks looked excellent in attack with Reuben Norvill, George Wood and George Griffiths all looking dangerous with the ball in hand. They played at speed when they could and were clinical in taking their chances.

The scrum, normally a strongpoint for the Hawks, struggled in the first half against an impressive Taunton pack but the Hawks have the players in the squad to address that for this week.

The one area they should look to improve as the season progresses is their game management and making sure they are playing in the right areas of the pitch, and their ability to be able to close a game down. Head coach Luke Allen alluded to this in his after match comments last week.

Continuity in selection is the name of the game as Head coach Luke Allen has made just two changes to the starting one up for the Worthing clash.

Will Janes comes in at full back in place of George Wood. In the forwards, prop Rory Mason comes off the bench and into the front row after doing such a good job at consolidating the scrum last week. Charlie Hughes reverts to the bench alongside George Probyn, Scott White, Jimmy Wright, Jack Robinson and Liam Goodison.

Worthing have been ever present in the league since 2007-08 season and are always a passionate side, particularly at home. When they visited Dry Leas earlier in the season, the Hawks won comfortably 63-7 but it was a young, inexperienced Worthing side who showed plenty of spirit and promise. Since then, they have improved dramatically and now lie 9th in the league table having won nine of the eighteen games played so far and their victories include wins against Leicester Lions, Esher and Clifton.

The Hawks won 42-19 on their last visit to Worthing (last season) but they have also been on the wrong end of a few heavy defeats in Sussex in the past so ther will be no room for complacency this weekend.

Elsewhere, the Hawks 2nd (Bulls) XV have no game this week but the Hawks 3rd (Vikings) XV have another Oxfordshire derby to relish as they travel to take on Witney 3rd XV, kick off  2.15pm.

The Henley Hawks Women have no game this week.

An opportunity for supporters!

The England Women’s Rugby team will also be training at Dry Leas with the full Henley Hawks squad on Tuesday 21st January at 6.30pm.
Spectators are very welcome.