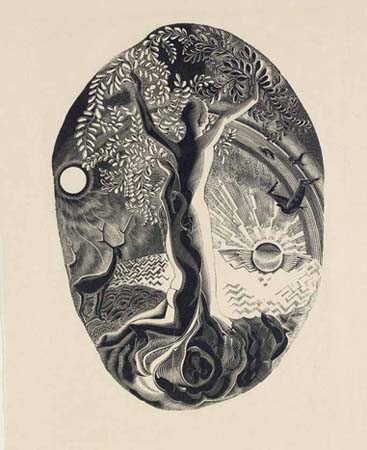 A new exhibition celebrating artist Gertrude Hermes’ life and showcasing her wonderful work is to open at the River & Rowing Museum on 7 February.

One of the most talented and imaginative engravers of her generation, Gertrude Hermes OBE RA (1901–1983) drew much of her inspiration from nature, revealing a restless curiosity about the world around her, including the River Thames.

Gertrude Hermes’ sister May said, “We all sensed there was something special about Gertie and her relations with animals, trees, plants, insects. She watched them so intently – seemed more finely tuned to all living things than most of us. … Hers was a gentle wildness.”

An innovative sculptor, printmaker and teacher, Hermes was trained by the unconventional British modernist artist Leon Underwood (1890-1975), who encouraged her to capture forms in the natural world with a rapidly flowing line.

Hermes’ prints evoke the pleasures but also the strange and sinister elements of water, plants and animals. Water is the key element in Hermes’ world; a keen swimmer and diver, she revelled in the physical sensations and abstract patterns of water. Using this inspiration from the natural world, she transformed her direct, and often scientific, observations of her surroundings into intricate wood engravings, large-scale linocuts and sculptures.

Drawing on the rich collections of the Ashmolean Museum, this temporary exhibition at the River & Rowing Museum demonstrates Hermes’ enduring fascination with the natural world – from her Jazz Age bird, fish and flower prints to her monumental coloured linocuts of the 1950s.

By exploring the work of one of the most important, but little-known, British female artists of the 20th century, this exhibition will uncover the roots of Hermes’ fertile creative imagination and introduce her exceptional work to a new audience.

Building on the themes in the exhibition, the Museum will offer a selection of adult events and children’s workshops, such as ‘Wild at Heart’ encouraging participants to view nature and the River Thames with a ‘gentle wildness’ like Hermes herself.   Click here to see adult workshops.

This exhibition has been Organised by the Ashmolean Museum, University of Oxford and runs until 4 May.