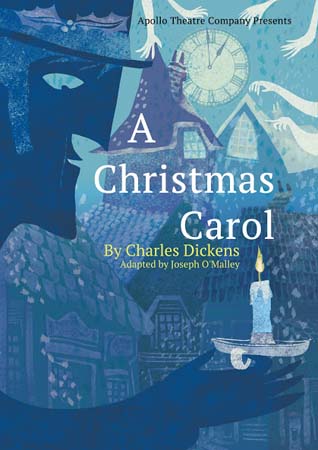 The Kenton Theatre is pleased to announce a live streamed version of A Christmas Carol and a reading by Simon Williams (Upstairs, Downstairs) of Clement C Y Moore’s classic The Night Before Christmas will both take place during the festive period.

A Christmas Carol will be brought to life on The Kenton Theatre’s stage on Thursday 17 December at 7pm as Apollo Theatre Company live stream the performance to patrons’ homes. The show can be watched either live or on-demand for a limited time until Friday 27 December.

First produced last year, this original adaptation by director Joseph O’Malley (The 39 Steps), sees a cast of four tell Charles Dickens’s most famous story in a traditional, yet unique production that combines classic storytelling with puppetry, physical theatre and music, using some of the most evocative traditional Christmas carols.

Artistic director of Apollo Theatre Company, Tim Astley said, “This is a beautiful production that contains all the traditional elements of the original story, told in a fast-paced, incredibly creative manner that is sure to delight the whole family and put everyone in the Christmas spirit.”

The Kenton Theatre welcomes any care homes within the local area to get in touch with generalmanager@kentontheatre.co.uk. For all other audiences tickets are only £5 per device/household.

Due to a technical fault within the Henley area the much-anticipated live stream of This Show Does Not Contain Nuts sadly did not take place on 26 November. However, The Kenton Theatre is pleased to announce the show has been rescheduled for Thursday 10 December.

Powering into its fourth season this sell-out all-female comedy show is coming to you virtually for a night in your front room, hosted by the hilarious Maddi Sharkey and stand up performances from three of the UK top female comediennes.

Audiences will be spoilt with fabulous stand-up sets, plus an interactive chat with the comediennes themselves where you get to choose the topic of discussion, creating a setting for some serious belly laughs. All opened in a unique fashion by host Maddi Sharkey who makes the warm up almost instantaneous.

Full line up of comediennes to be announced.

Simon Williams will be reading The Night Before Christmas exclusively for The Kenton, which will be available to watch from Christmas Eve (24 December) on The Kenton Theatre’s Facebook page. Donations towards the Kenton For Keeps campaign will be warmly welcomed.

The Kenton Theatre are still asking the public to generously donate towards their Kenton For Keeps campaign, which so far has raised £18,957.95 of its £35,000 public fundraising target. The Kenton Theatre received financial aid from the Arts Council England’s Emergency Response Fund, supported by the National Lottery, in May 2020. The theatre has set a target to match the £35,000 received through its own fundraising campaign.

Running Time: one hour with no interval.

The performance is available to watch LIVE on Thursday 17 December at 7pm or on demand until Friday 27 December 2020.

This Show Does Not Contain Nuts

HOW TO DONATE TO THE KENTON FOR KEEPS CAMPAIGN: