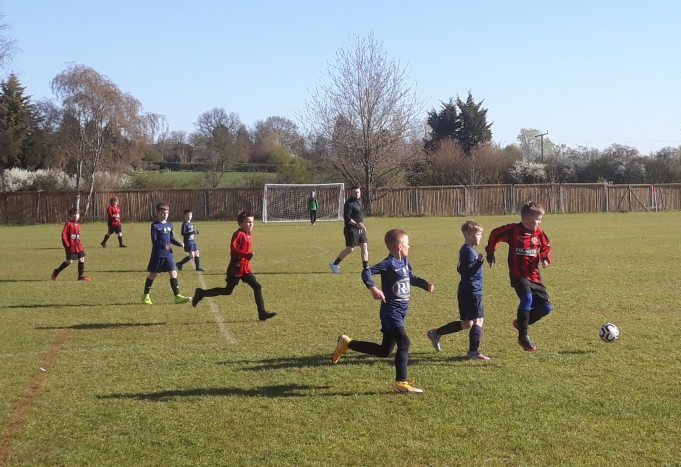 Saturday saw the AFC Henley Hurricanes U10s’ latest game, an away league fixture against Binfield Celtics. The backdrop was a gloriously sunny morning, a well-maintained ground alive with several games punctuated by regular planes crossing the sky as they eased into Heathrow.

Following a minute’s silence in memory of the Duke of Edinburgh, the game began in earnest. It was the Celtics who set the early pace, their two attempts on goal controlled by Hurricanes goalkeeper Harrison Carpenter Buckett. The Hurricanes began to find their way into the game. Their fimove real move was a Dominic Ellis throw in which found Jack Callaway and Oscar Robinson further up the pitch. Oscar Robinson was starting to pose problems for the Celtics defence, and in one run worked his way past two defenders to shoot crisply past the keeper from the edge of the box.

The Hurricanes continued to apply pressure, Jack Callaway, Oscar Robinson and Will Lindsay working well together upfront. The Celtics were equally quick on the break, and were making the Hurricanes work hard in midfield and defence.

The game continued in this vein. Jack Tookey was showed great commitment to cut out one Celtics attack, whilst Will Goulden was authoritative in the centre of defence. Goalkeeper Harrison Carpenter Buckett was calm under pressure in dealing with two shots on goal. At the other end, some good moves between Oscar Robinson, Will Lindsay, Shiva Vadhoolan and Luca Currie created opportunities to attack the Celtics’ goal.

The third quarter began with a break by the Hurricanes, but the Celtics responded in kind. Hurricanes keeper Harrison Carpenter Buckett was not only skilful enough to save a shot from a Celtics striker who was through on goal, but alert enough to collect the follow up ball. Moments later the tables were turned as a thumping Will Goulden shot was equally well saved by the Celtics keeper.

The gam continued to ebb and flow. At one end, the Hurricanes were made to work in defence Jake Thatcher, Jack Tookey and Dominic Ellis all making important interventions. At the other end, Jack Callaway was winning the ball on the right wing, and looking for Will Goulden in the centre. Dominic Ellis’s long throw ins had caused difficulties for the Celtics for the whole game. One found Will Goulden in the box, who made no mistake in scoring from close range.

As the game entered its final stages there was no easing from the Celtics. They put the Hurricanes under pressure with a succession of corners. Dominic Ellis defended well, and man of the match Harrison Carpenter Buckett was alert to the loose ball. However the pressure eventually told, with a rapid Celtics break cutting through the Hurricanes’ defence and a clinical shot left the keeper no chance. The Celtics kept up the pressure until the end of the game. A determined sliding block from Shiva Vadhoolan stopped one attack, and Harrison Carpenter Buckett parried another shot, with the follow up going narrowly wide.

The Hurricanes’ league season continues with a home fixture next weekend.