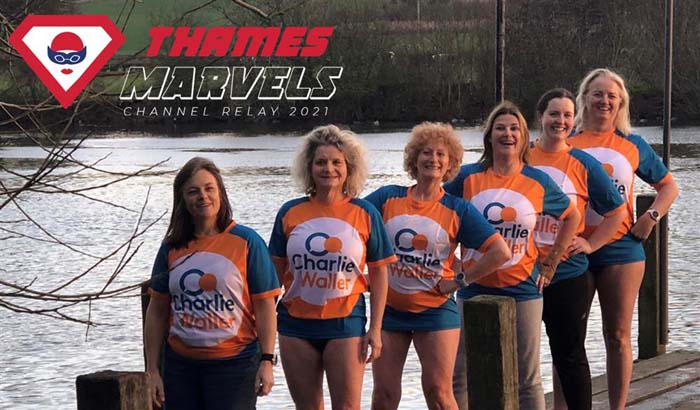 Another team of six swimmers from the Henley Open Water Swimming Club are planning to relay swim the English Channel this summer.

Marika, Alaine, Rebecca, Vicky, Elizabeth (Liz) and Lee (the initials of their names spell ’marvel’) have been training in the River Thames ahead of their epic swim between Dover and Calais and are raising funds for Charlie Waller Trust charity.

The Thames Marvels – four of whom are from the local Henley area – will face jellyfish, unsettled weather, choppy waters, and tide changes on the swim, which is due to take place at some point between 30 June and 10 July.

Rebecca Poole, a professional singer and music teacher from Peppard, said: “Since deciding to take on the English Channel we’ve had many issues thrown at us including lockdowns, pools being shut and even snow and ice. We’ve carried on training throughout and our friendship and the camaraderie of the group has kept everyone going at what could otherwise have been a difficult time.”

All six women agreed to support Thatcham-based charity the Charlie Waller Trust which educates young people and those who have responsibility for them about mental health.

Rebecca comments, “I think we have all been touched by mental health and depression in one way or another. Many of us have had friends or family affected by mental health issues and the Charlie Waller Trust is a local charity which does such fantastic work to support the wellbeing of young people that it became the obvious choice.”

Clare Stafford, Chief Executive of the Charlie Waller Trust, said: “We are so grateful to these six brave individuals for taking on such an incredible challenge for Charlie Waller. The training alone, which has seen them endure water temperatures barely above freezing and having to overcome the challenges of the pandemic, has been a marathon effort.”

Last year, the Henley Mermaids completed the English Channel relay swim on 22 July in 17 hours 43 mins and raised £35K for Henley Music School.  This year they are attempting to the be first women’s relay team to swim the Bristol Channel on the same day (22 July 2021).

If you would like to sponsor the Thames Marvels you can do so on their Just Giving Page.

Move Together launched to Help Vulnerable Residents
Scroll to top