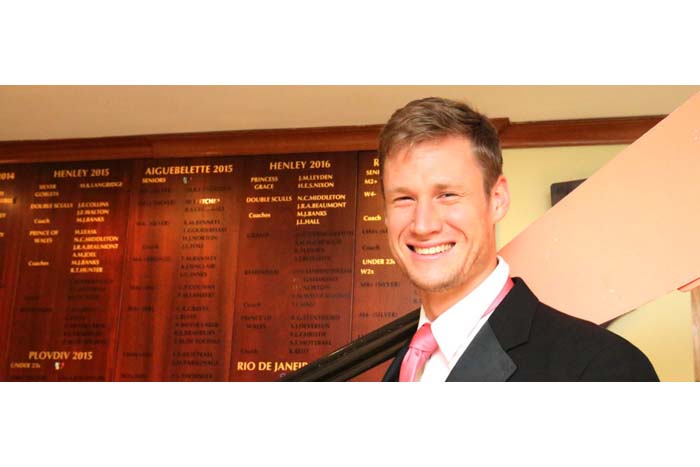 Six-times Henley winner Nick Middleton is to be the new captain of Leander Club.

Middleton, 28, will take up his duties on 1 January, and succeeds double Olympic champion Alex Gregory, who has retired from his international rowing career.

“I was a bit surprised, but felt very honoured to be selected. Obviously the club means the absolute world to me – it’s seen me progress from a child to a man, and has made me the athlete I am today” he said after the announcement.

Middleton was a national-standard swimmer, training at Loughborough, until 2008 when an injury side-lined him, forcing a changed in direction.

“I’d been up to Liverpool for selection to the Royal Marines Reserve, and I read about the GB success in Beijing while I was on the train” he explained.

“My old swimming physio had suggested I might like to make the transition to rowing, so I applied to Leander. They replied immediately, and I was invited to come and stay at the club while I had my first assessment” he continued.

One aspect of his application proved controversial.

“I had to submit a 2K ergo time, so I completed 500m and multiplied it by four!” he admitted.

Within a week he had been admitted to the Leander development squad, and had no trouble completing two 10-minute pieces at a 1:48 split. His creativity with numbers was never tested, and at his first 2K trial some weeks later he posted a very respectable 6 mins 17 secs.

“Swimming is a very individual sport, and it’s all indoors – rowing is outside, and there’s a massive team spirit. When I arrived at Leander there was this massive ‘wow’ factor ” he explained.

His arrival proved the start of an enormously successful rowing career, and within two years he had won his first Henley medal as a member of the 2010 crew which won the Prince of Wales’ Challenge Cup. He has since won the Prince of Wales a further three times, but made the switch to sweep rowing to race in the winning Ladies’ Plate eight in 2013.

This year Middleton was selected for the first World Cup regatta of the season in Italy, where he finished sixth in the double scull with Jack Beaumont. They repeated that result six weeks later in Lucerne and decided to enter the Double Sculls at Henley, which they duly won.
Despite having no Olympic experience the new captain can draw upon six years of international representation, which began in 2010 at the U23 World Championships in Belarus.

“I started at Leander from scratch, so I know everyone every well, either at the Club, or in the GB team at Caversham. I think I’m very approachable at every level, and that’s absolutely key to the captain’s role. I’ve raced at Henley with six athletes who went on to the Olympics, so I know that everything is possible, and that’s the sense I want to pass on to the freshers” he explained.

Middleton’s training schedule at Caversham is so intense that he was still looking forward to sharing news of his appointment with his partner, Monica Relph, herself a former GB athlete, and with his parents, Jackie and Steve, who live near Guildford.

But following the announcement his passion for his club is clear.

“Leander is my first club, my only club, and that means everything to me. To represent the athletes is a fantastic feeling, and I just hope that I can do as good a job as Alex has done” he concluded.

Volunteers Wanted for May Fair Working Group
Scroll to top