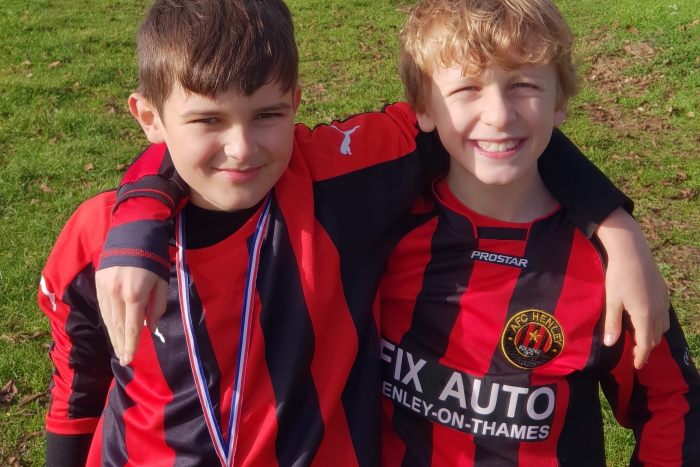 The U12 AFC Henley Hurricanes won 4 0 at Jubilee Park in the East Berks Division 1 League against the Binfield Eagles as they consolidated their league position.

With confidence running through the team after consecutive victories the Hurricanes started brightly and were soon on the front foot.

lead. Tom Atkinson was proving to be a real thorn in the Eagles side as he linked the midfield to the forward line in his number 10 role.

Alec Steel was also working his magic down the right side of midfield as he set up a number of chances that hard working striker Tom Bonser was unlucky not to convert.

At the other end of the pitch Henry Steel was marshalling the back line with great efficiency as the visitors were restricted to a handful of half chances that meant the Hurricanes went in 1 up at half time.

Binfield started the second half strongly and Olly Saunders in the home goal had to pull off a magnificent diving save to keep the scores level.

Stung into action the Hurricanes went in search of a second and this duly came about to relieve the pressure on the home side. Captain Luca Thomson who was having his usual solid game at the back and he floated a perfectly directed free kick in to the path of Man of the Match Joe “Features” Turner. Turner brought the ball down before calmly slotting the ball over the advancing keeper.

The two goal advantage was quickly extended as Ethan Holliday, who was putting in a real shift in the centre of midfield, slipped Turner in again and Turner, who was proving to be a real chip off the old block, finished clinically to make it 3-0.

Sam Robinson was causing chaos down the left and he almost scored a fourth but that was left to Yeoman who picked up a pass from Turner and he powered pass 3 helpless Binfield defenders to make it 4-0.

Managers Turner and Atkinson were said to be delighted by the performance of the team and were pleased that the efforts of the team were now being rewarded with 3 points.

If any boy or girl would like to join AFC Henley then please come down to Jubilee Park on a Friday night at 6.15pm or see the AFC Henley website for contact details.