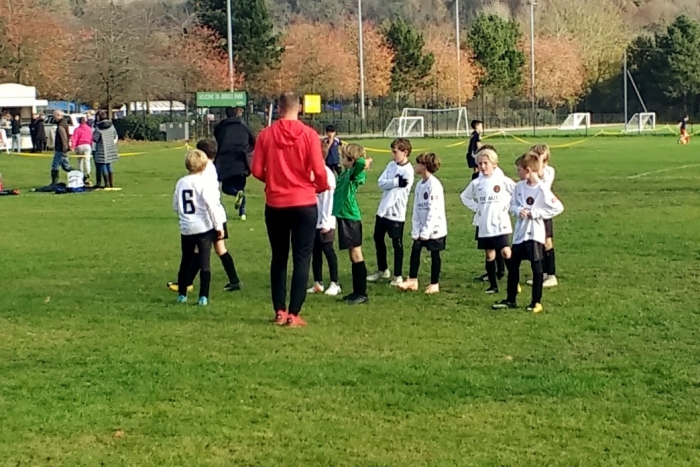 With the low autumn sun once again dazzling the Henley team, they needed to keep the ball in the opposition end, but despite kicking off and passing well, Woodley managed to win possession and mount an early counter attack. Fortunately, keeper George Beesley displayed great awareness, coming out and clearing the ball confidently, in what was to be a testing match for both keepers.

Pushing back to the opposition end, a concerted attack on goal ensued with shots from Charlie Cooper and Charlie Myers stretching the keeper to concede a corner. This was neatly taken by Archie Butlin who lofted the ball into the box where Cooper skilfully headed it past the keeper taking the score to 1-0 for the home side. (The Hurricanes first headed goal and their 60th for the season)

Undaunted by going behind, Woodley fought back also managing to win a corner and in what appeared to be a well practiced set piece their striker volleyed the cross into the home net to bring the scores level.

With the Hurricanes now appearing under some pressure, defender Corben Galloway took it upon himself to try and win back the advantage. From a throw in at the halfway line he dribbled it across the pitch around several of the Woodley players, finishing with a lovely shot into the top left corner of the net giving a 2-1 lead.

Having gone behind again, the Jaguars stepped up their attack and managed to squeeze through a lucky ball to just trickle over the line; another was scored not long after as the Hurricanes seemed to be taken slightly unawares. This left the home team trailing at 2-3 at the end of a long first quarter.

With a couple of substitutions Henley seemed to regain control with more great shots from both Charlies and a superb goal from Lorenzo Nicoletti-Dowd bringing the scoreline level at 3-3 for half time.

The third quarter was where the Hurricanes really got into gear as some great passing and dribbling enabled another onslaught of shots and despite some accomplished keeping from the Jaguars goalie, he wasn’t able to protect the net. Following several deflections and saves, Isaac Walmsley found the ball at his feet, then making a lovely turn he put it swiftly into the goal to take Henley into the lead.

Archie Butlin, having played strongly throughout the match unleashed a super shot which was saved by the keeper, he then immediately followed it up with an even stronger blast into the back of the net to make it 5-3. Then a throw in to Charlie Cooper was proceeded by some fabulous footwork as he tapped it past the keeper for goal number six. The visitors were now on the back foot and Josh Ashford, with one of many lovely shots, finally found a way past the keeper for a seventh goal for Henley. After a number of chances for Charlie Myers he too found the net in the third quarter with a great breaking run from the halfway line. This left the score at a comfortable 8-3 at the end of the third quarter.

In spite of their goal deficit, the Jaguars certainly didn’t give up and some further attacking play put Henley under pressure, as a lucky interception from a Woodley player resulted in them scoring one more goal.

As the final whistle approached Freddy Estornel made a fantastic solo run, sidestepping a number of Woodley players and comfortably poking the ball home for a well-deserved goal and taking the scoreline to 9-4.

To illustrate the Hurricanes team ability, eight of the ten players scored goals during the match. Understandably, keeper George Beesley stayed off the score sheet, but he certainly shone, making some fantastic saves, tackles  and clearances on numerous occasions. The other player not to score was Harry Biggs, but as ever he was an elemental force, tackling strongly, winning the ball and selflessly delivering it to his team-mates throughout the game; assisting several of the goals that were scored.

The match was a thoroughly enthralling performance from the Hurricanes yielding their ninth straight win of the season.