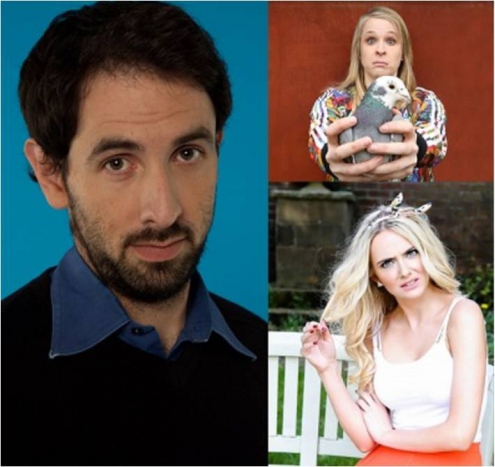 Not only are there some great comedy nights coming to the Kenton between April and June, they’re offering a special deal on tickets too.

Steve Hall is a stand-up comedian and writer, who returned to the Edinburgh Festival in 2015 with his sell-out third show  Zebra . Steve has written on the last 5 series of Russell Howard’s Good News (BBC 2) as well as numerous other programmes, such as Russell Howard’s Stand Up Central (Comedy Central), A League of Their Own (Sky) and The Now Show (BBC Radio 4), among others. He is a regular guest on The Frank Skinner Show on Absolute Radio and has appeared as a panellist on The Rest is History for BBC Radio 4.

Two for one deal on tickets – use the code HCOL19

After sell-out, critically acclaimed runs at the Edinburgh Fringe Festival and London, with both runs extended to meet high demand, Lou Sanders is back with a national tour. She brings stabby step mothers, alcohol issues and an unusual sexual encounter in LA with her.

This show is all about shame. Sanders has met some pigs – and been a mucky little pig herself – and now she’s rolling around in her own filth for your delight.

Shame Pig won the Comedian’s Choice Award at the Edinburgh Fringe, as voted by her fellow comedians. Lou has been seen on screen on 8 out of 10 Cats (Channel 4), Taskmaster (Dave) and The Russell Howard Hour (Sky One), as well as being heard on The Unbelievable Truth (BBC Radio 4).

Chortle Award nominee and BBC New Comedy Award Finalist, Steve Williams is one of the most exciting and electrifying live performers on the comedy circuit. Steve never fails to surprise and engage audiences with his hybrid of bizarre stories, larger than life physicality and spontaneous improvisation.

The line up also includes Kieran Boyd who has enjoyed nine years of sold-out audiences at the Edinburgh Fringe and Phil Ellis, an award-winning comic renowned for his amalgamation of offbeat observational material and physical comedy. His anarchic sleeper hit of a show “Funz and Gamez” saw him win the Fosters Edinburgh Comedy Award’s Panel Prize.

Two for one deal on tickets – use the code HCOL19