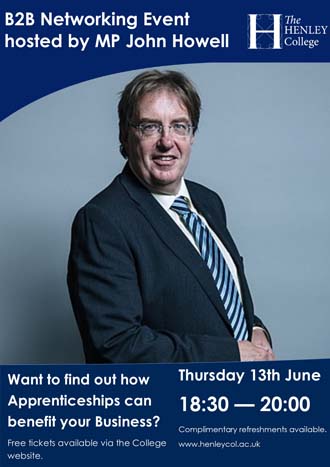 The Henley College are excited to announce an Apprenticeships event aimed at businesses at 6pm on the Thursday 13th June.

Co-hosted by John Howell, MP for Henley-on-Thames, it will introduce the Apprenticeship programmes they offer and how they can be of benefit to business. The event will include light refreshments and an opportunity to network with key businesses and entrepreneurs in the Thames Valley.

“Apprenticeships can provide a fantastic opportunity for young people to build a career and raise the productivity of the businesses they join. I am delighted that we have The Henley College here in the constituency offering an expanding programme of Apprenticeships. This will enable more local young people and local businesses to gain the benefits from such a programme. On the 13th June there will be a chance to find out about what the college has to offer and to hear from businesses and young people who have already benefitted from the scheme.” John Howell

John Howell is the Henley on Thames MP But also brings, a range of national and international experience which he’s gathered from politics, business and broadcasting. He was invited by the Prime Minister to be a member of the Council of Europe and also to be the PM’s Trade Envoy to Nigeria. Both give him a role on the international stage which is joined by that which he has in the Middle East.

As well as Mr Howell, there will be a variety of speakers including Jo Bright, Customer Relations Manager from Volvo UK, Nick Sadler, Producer from Goldfinch studios and Dr Julian Brinsford from The Henley College.

Nick Sadler heads up Goldfinch First Flights, the first feature film director program for Goldfinch Studios. Originally from the music industry, Nick co-founded the industry-disrupting film company, The Film Label, where he has worked as a Producer of Marketing and Distribution bringing independent feature films to UK theatres such as Pandorica, Redwood, Dark Beacon and Iron Sky : Coming Race.

Nick has brought his expertise from the fast-paced music label model and applied it to the indie film market. Every Film Label release has been written, produced, edited and brought to the big screen in under 12 months. The films have been selected for and won awards at festivals such as Frightfest, American Horror Film Festival and New York Film Festival.

Nick said “Goldfinch Studios are delighted to be sponsoring this event and working with The Henley College on the development of Apprenticeships to fit their business needs.The Goldfinch brand provides a vertically integrated global business model with expertise across finance, production, facilities and management in Film, Television and Video Games. Our track record includes 200+ projects and investments of $300m+ into the creative industries, with many going on to win awards and critical acclaim.”

Topics will include: How Apprenticeships can improve your business,

An employer’s perspective on the value of Apprenticeships, an introduction to industrial placements and how employers can benefit.

Reserve your space via: https://www.eventbrite.co.uk/e/the-henley-college-apprenticeship-event-tickets-61627253775