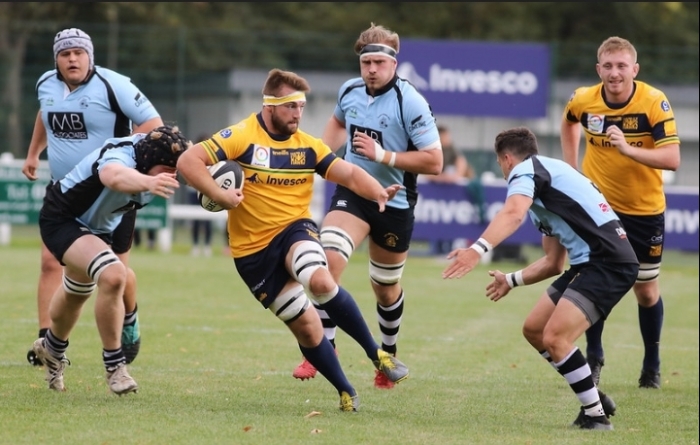 In almost near perfect conditions, Henley Hawks started their season in confident style with an eight try victory over newly promoted Sutton and Epsom.

This was a good start for the Hawks although the Londoners were disappointing, offered little in attack and found the pace of the Hawks play difficult to handle. There were opportunities to make the scoreboard even more uncomfortable for the visitors, especially in the second half and the Hawks will want to be more ruthless as the season progresses. That said, it’s a pleasing start to a very tough league campaign and sends a message to the rest of league that Henley mean business again this season.

The Hawks started in tremendous style, playing with pace and putting the visitors under immense pressure. With some good handling from both backs and forwards, Henley scored three unconverted tries in the first fifteen minutes, two from wing Jack Robinson and one from full back Liam O’Neill.

Henley’s first came after just three minutes, starting with Sutton being pushed off their own scrum by the dominant Hawks pack. Good handling from Liam O’Neill created space for Jack Robinson to score in the corner.

Liam O’Neill scored the second himself just five minutes later, again finishing off some good handling from the backs.

Tom Hall, Dave Hyde, Marcus Lowe and Alex Bradley were prominent in the loose play, driving well and keeping the visitors on the back foot and after a good run from George Wood, Robinson grabbed his second try to give the Hawks a 15-0 lead.

The Londoners looked shellshocked and fell further behind when the Hawks scored their bonus point try. Good work from the excellent Tom Hall, Tom Emery and Alex Burrage created space for Robinson to claim his hat trick try in the corner.

On the rare occasion that the visitors ventured into the Hawks half, the home side’s defence had no real problems in dealing with any attack threat while the Hawks, in contrast, had most of the possession and territory and continued to pay at pace and look to attack.

Just before the break, another Hawks scrum pushed the visitors off their own ball five metres out and Dave Hyde picked up to crash over for the try. Ben Bolster kicked the first of his three conversion.

The restart was collected by Hyde and he broke some weak tackling to charge up the field. He was well supported by Alex Bradley and Jack Robinson and eventually Sam Lunnon crossed in the corner. Bolster again converted to give the Hawks a 34-0 half time lead.

The signs looked ominous for the Londoners as the Hawks started the second half in similar style and attacked straight away. Dave Hyde crossed for his second try following a good driving maul from the Hawks pack, a try which Bolster converted.

Just as it looked as if the Hawks would run up a large score, the second half succumbed into a rather scrappy affair. With the game won, the Hawks levels of concentration and intensity dropped a little and the visitors enjoyed little more possession. After a series of forward drives, scrum half Perry Jansen crossed for the visitors solitary try.

The Hawks continued to control things, tried to play with pace and created a number of further opportunities. But by trying to be a little too complicated and making some uncharacteristic handling errors, the chances were lost.

Eventually, the Hawks broke clear with Jake Albon making some good ground and putting the Hawks in a good attacking position. Xav Andre then made a good break and was well supported by debutant scrum half Ewan Fenley, who capped a good performance by scoring the Hawks eighth try and completing a comprehensive victory for the Hawks.