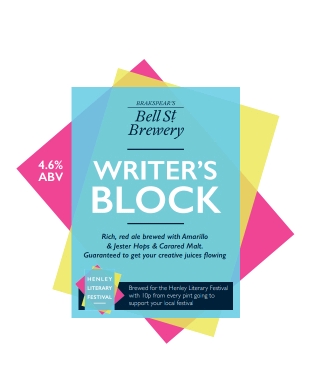 A beer with your books, anyone?  Literature lovers in Henley can enjoy a new ale from local brewer Brakspear, specially brewed to celebrate and support the town’s Literary Festival running later this month.

The aptly-named Writer’s Block is brewed at the Bell Street Brewery and will be sold from mid-September in Brakspear pubs in and around the town. For every pint sold, 10p will go to the festival, which runs from 26 September to 6 October.

Writer’s Block is a 4.6% ABV rich, red ale, brewed with Amarillo and Jester Hops and Carared malt. Brakspear has designed a striking, book-shaped pumpclip for the beer to spark interest and orders from pub customers.

Henley Literary Festival is now in its 13th year and this year features a stellar line up of authors, journalists, TV presenters and politicians, including Mary Berry, Melvyn Bragg and Alastair Cook as well as children’s authors Konnie Huq, Dougie Poynter and Chris Riddell, and former PM Theresa May in her first public speaking appearance since leaving office.

Brakspear chief executive Tom Davies said: “The Literary Festival is one of the highlights of Henley’s cultural calendar and we applaud the sterling work done by the organisers who have built it into one of the UK’s leading book festivals.

“We’re delighted to be brewing Writer’s Block, a beer that celebrates the Festival and raises money for it. With its red colour and rich taste, it heralds the autumn season ahead and is the perfect pint for supping, book in hand. Or just supping!”

He added, “Unfortunately, we can’t guarantee a pint of Writer’s Block will turn the drinker into the next literary sensation, but taking a short break in the pub with a sociable pint just might help the creative juices to flow again!”

Harriet Reed-Ryan, events director at Henley Literary Festival, said:  “We were delighted when Brakspear approached us about brewing a beer as one of our main focuses of the festival is bringing people into the centre of town to go to pubs, shops, cafes and restaurants in between events,  so now they can even order a pint of Writer’s Block too!”

Brakspear regularly brews special beers to commemorate local events and support local causes, including ‘Rhuby’, brewed for the first Eat Food Festival in Henley this June and ‘Two Bells’, which has been given to swimmers at the end of the Henley Club to Pub Swim for the past six years.

On the Beat… August Police Update
Scroll to top