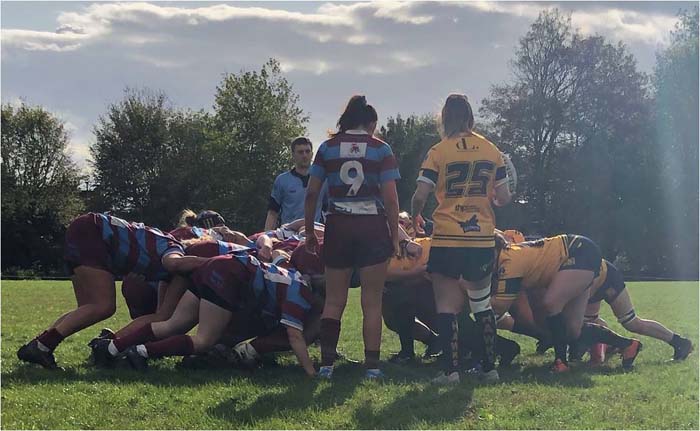 Henley Hawks Women travelled to Hove in the fourth game of their Championship South league campaign.

Henley started the game brightly, with some great defence from the whole team to put pressure onto the Hove attack. Unfortunately, a penalty allowed Hove to regain possession, eventually resulting in a try, which Hove failed to convert. Some great running lines from Shannon Loney and Chloe Baker allowed Henley to attack before being hit into touch. Hove had a much larger pack then Henley, who tried to use this to their advantage, however some great defence from the Henley pack resulted in a held up try. Unfortunately, Hove’s size advantage showed when the resulting scrum allowed them to cross the Henley line, for a second unconverted try.

The rest of the first half consisted of some more impressive running lines from Henley, with Rachel Humphreys and Nina Webb threatening the Hove defence. The half ended scrappily with a number of knock-ons and the resulting scrums not allowing either team to really take a hold of the game. The first half ended with Hove remaining ahead on the score board 10-0.

The second half started well for Henley, with the forwards gaining dominance to set up a platform for the backs to move the ball outside. Fly-half Louise Carr crossed the try line for Henley in her first game back for a few years, which was converted emphatically by Mia McCreesh, to bring the score to 10-7.

Unfortunately for Henley, Hove hit straight back with some more dominance at the scrum allowing their number 8 to pick and go before feeding the ball out wide for Hove to cross for their third try, taking the score to 15-7. Henley defended bravely, managing to turn over Hove on a number of occasions but couldn’t quite put together the final pass. Hove took their chance with some strong running lines to bag their fourth try in the corner. Their fifth try came shortly after from another blind-side pick from the powerful Hove pack, to bring the score to 25-7.

Henley fought back, with a great scrum allowing the ball to be passed out wide for Nina to break the Hove defensive line, feeding Jemma Thripp on the wing to beat her opposite number and touch down for Henley’s second try. Mia converted once again to bring the score 25-14. However, Hove had the last say, with the resulting restart gathered by Hove, allowing them to run in their sixth try under the posts. The try was converted with the game finishing at 32-14.

Players player went to Louise for controlling the game brilliantly in her first game back in Henley colours. Coaches player went to Shannon who ran some excellent lines from the centres all match. A final mention went to Tina Simpson who captained the side fantastically on the same weekend she celebrated her birthday.