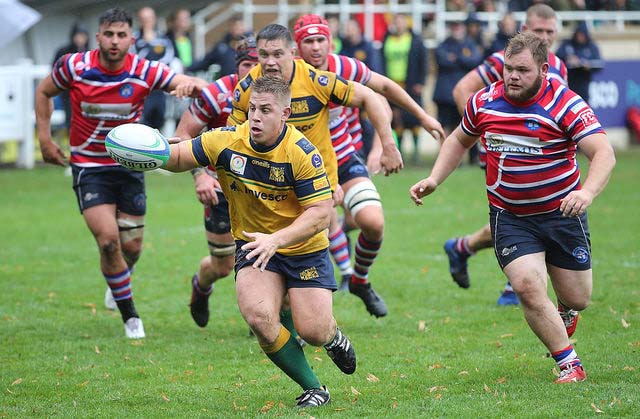 Henley Hawks travel to Kent on Saturday for their latest National 2 (South) fixture, to take on the in form and table topping Tonbridge Juddians. Kick off at the Slade Ground in Tonbridge is 3pm.

The Hawks have lost a little momentum and will want to get their season back on track having only won once in their last three fixtures. The task this week could not be any tougher, away at the high flying Juddians who have not lost a game this season so far.

The Hawks are a match for any team in this league, but game management will be a priority in preparation for this week’s match as the performances against Taunton and Redruth showed. The Hawks had chances in both games to seal victory but didn’t take them.

Continuity in selection was a major factor in the success of last season and Head coach Luke Allen has made just one change to the starting lineup for this important clash. Alex Bradley returns from injury to No8 in place of Marcus Lowe who is on the replacements bench.

Last season, Tonbridge did the double over the Hawks, winning 19-14 at Dry Leas and 23-12 in Kent. Despite this, both sides should be evenly matched as they both finished on 120 points and the Kent side will know that the Hawks have the capability of winning the game. Victory for the Hawks is certainly a possibility, and some say a necessity if the aspirations of promotion are to be achieved. They certainly won’t want Tonbridge to get too far ahead so early in the campaign.

Juddians have certainly set their stall out this season, leading the table by 5 points and although still early days, they do look like they are the team to beat. They are carrying on from where they left off last term, where they finished third, one place above the Hawks. So far this season, they have won all of their six fixtures to date, including a 68-31 drubbing of second placed Taunton Titans. Other victories have come against Leicester Lions, Sutton and Epsom, Old Redcliffians, Bournemouth and Worthing.

Elsewhere, the Hawks 2nd (Bulls) XV travel to London to take on Ealing U23. Kick off time is TBC. Please check club website for details.
There is action at Dry Leas on Saturday when the 3rd (Vikings) XV take on Risborough 3rd XV. Kick off is 3pm.
Henley Hawks Women have no game this week.