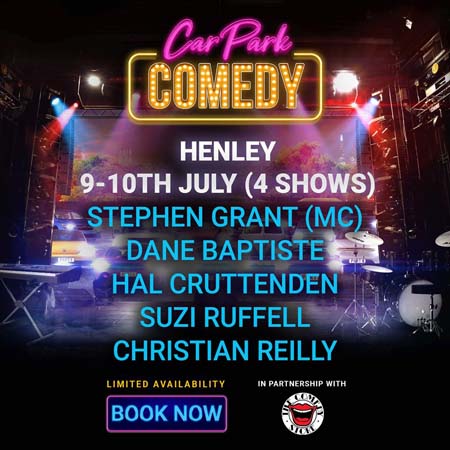 The line up for the Festival’s Comedy Nights at their Car Park Party on Thursday 9 and Friday 10 July have been announced.

The stellar line-up. in association with The Comedy Store will see a quartet of performances, from comedy circuit stalwarts Dane Baptiste, Hal Cruttenden, Suzi Ruffell and Christian Reilly, hosted by Stephen Grant.

A double winner of the Chortle Comedy Award for Best Compere (2008, 2011), Stephen Grant is the perfect man for the job at Henley. A regular headliner at The Comedy Store in Leicester Square, his speed and dynamism create a magical energy which has audiences rapt and hanging onto his every word. It is this that led Stephen to writing for Rob Beckett on Mock the Week and for writing for Russell Kane on Live at the Electric amongst many more.

Original and provocative, Dane Baptiste has already being hailed as one of the most exciting acts to break in years. TV credits include hosting Live at the Apollo (BBC Two) and Live from the Comedy Store (Comedy Central), Tonight at the London Palladium (ITV1), Mock the Week (BBC Two), 8 out of 10 Cats Does Countdown (Channel 4) and his own BBC sitcom, Sunny D. ‘Observational comedy at its finest’ The Independent

Hal Cruttenden is one of the top stand-up comedians working in the UK today, as well as being a highly accomplished writer and actor. He’s filled our screens recently on Have I Got News For You, The Apprentice: You’re Fired, Bake Off: Extra Slice, and Live at the Apollo.

Having won Best Club Comic at the 2019 Chortle Awards, Suzi Ruffell is one of the UK’s brightest upcoming stars. Her shows receive critical acclaim, and have nabbed her the working-class comedy crown of her generation. Suzi has most recently appeared on Live at the Apollo, Mock The Week, Roast Battle, Ultimate Worrier, Hypothetical, Stand Up Central and Comedy Central at the Comedy Store. ‘A Stand Up Gem’ The Guardian

Finally, musical comedian Christian Reilly brings an essence of something a little bit different to every line-up he graces. A global comedy circuit headliner, he has appeared at numerous international comedy festivals, on BBC radio and TV, and in four series of the Chortle Award-winning stand-up and sketch show ‘Richard Herring: As It Occurs To Me’. “A charmingly confident performer, an accomplished musician and a clever comic… The funniest songs I have heard in a long time” The Scotsman

Following on from Car Park Comedy, Henley Festival will further host Car Park Theatre and Car Park Karaoke on Saturday 11th July.  The festival will finish on the Sunday with a digital edition with musical performances from Will Young and Beverly Knight and comedy from Rory Bremner.

There are limited tickets priced at £35 per car for the car park party available at carparkparty.com.